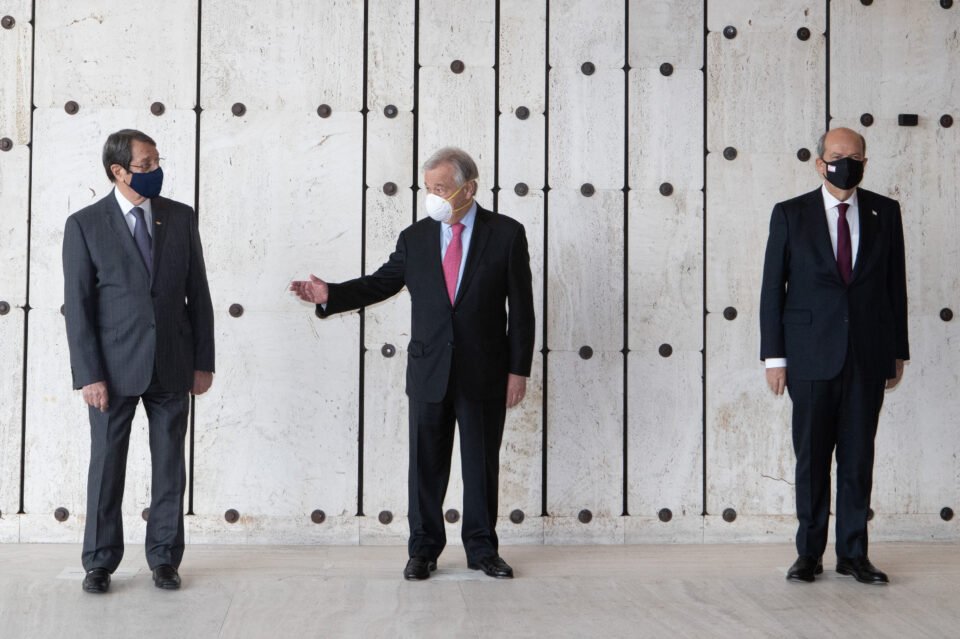 UN Secretary- General, Antonio Guterres warned in his latest Good Offices Mission report that unless parties act decisively now, continuing dynamics in and around Cyprus could render future efforts to reach a solution to the Cyprus problem unattainable.

An unofficial copy of the report was given on Friday afternoon to the Security Council members.

In his report, Guterres urges the parties to engage constructively in the continuing consultations so that meaningful talks aiming to solve the Cyprus problem can again resume, stressing that the UN Security Council has made clear in numerous resolutions over nearly fifty years that there is only one sovereign state on the island of Cyprus.

Guterres reiterated his determination to continue to assist the parties in reaching a comprehensive settlement within a foreseeable horizon, to bring lasting security and well-being to the Greek Cypriots and the Turkish Cypriots, who, he said, “deserve to live in peace and prosperity together in the exercise of their equal inherent rights.”

“Therefore, I urge the parties to engage constructively in the continuing consultations so that meaningful talks can again resume,” he said.

At the same time, he said, he noted “the realities on the island”, and that the parties have expressed to him the importance of finding a practicable framework within which genuine political equality would manifest as shared effective participation in the political and economic life of the island.

The Greek Cypriot side continues to work towards a federal solution as per the earlier agreement of the two sides while the Turkish Cypriot leadership and Turkey push for a two-state solution arguing that realities on the island have changed during the past five decades. They call for recognition of the north’s sovereignty by the Security Council and declare that a new process on the Cyprus problem should be between two equal states on the island and not two communities.

Guterres said that the coming months could prove to be decisive for the future of the Cyprus peace process, with possible repercussions on the island as well as around the Eastern Mediterranean region.
He warned that “interested parties need to recognise that, without decisive action now, continuing dynamics in and around Cyprus could render future efforts to reach a mutually agreeable settlement to the Cyprus issue unattainable.”

“While international actors need to be ready to fully play their part, I first look to Cyprus: to the leaders, to truly act in the best interests of their people and to explain clearly what is at stake to their constituents; and to all in Cyprus to assume responsibility for their future, from the leaders of the political parties, to the economic actors, to society at large,” he noted.

He added that the guarantor powers also must be ready to support the efforts to bring this long-standing dispute to a conclusion, to the benefit of all Cypriots. In this respect, he welcomes “the lessening of tensions and the positive steps taken towards dialogue in the region, including between guarantor powers Greece and Turkey, on issues that divide them.”

Guterres said that four years after the process in Crans-Montana the issues have become more complicated. “While it remains to be seen whether common ground can be reached to resume negotiations for a lasting settlement in Cyprus, it should be recalled that the future of the process remains in the hands of the parties, especially the two Cypriot leaders,” he said.

He noted that the two sides’ positions remain far apart, stressing that “as we endeavour to support the sides in seeking common ground, the parties’ display of flexibility, political will, and a clear-eyed view of the best interests of the Cypriots will be of paramount importance.”

Guterres said he continues to monitor developments in and around Cyprus closely and called on the leaders to find common ground to allow for formal negotiations to start.

He stressed the need to avoid actions on the island, including in Varosha, that could complicate chances for finding common ground between the parties or could trigger tensions.

Referring to Varosha, Guterres said that during the reporting period, there were repeated instances where Turkish Cypriot and Turkish officials publicly stated their intention to develop Varosha in such a way that would, in their view, strengthen the economy in the north, including through attracting tourism.

“These statements and developments on the ground triggered objections from Greek Cypriots who stressed that ongoing activities in Varosha violate relevant Security Council resolutions, including 550 (1984) and 789 (1992), as well as the 9 October 2020 Security Council presidential statement on the issue,” he added. He said developments on the ground in the fenced-off town of Varosha continue to be observed.

“I reiterate my concern over developments in the fenced-off area of the town and recall that the position of the United Nations remains unchanged. I further recall the Council’s Presidential Statement of 9 October 2020 and the relevant Security Council resolutions related to Varosha, notably resolutions 550 (1984) and 789 (1992), and the importance of adhering fully to those resolutions,” he said.

Guterres also referred to the issue of hydrocarbons and reiterated that natural resources around the island should benefit both communities and constitute a strong incentive for the parties to find a mutually acceptable and durable solution in Cyprus and to engender deeper regional cooperation.

Who really caught the eye at Euro 2020