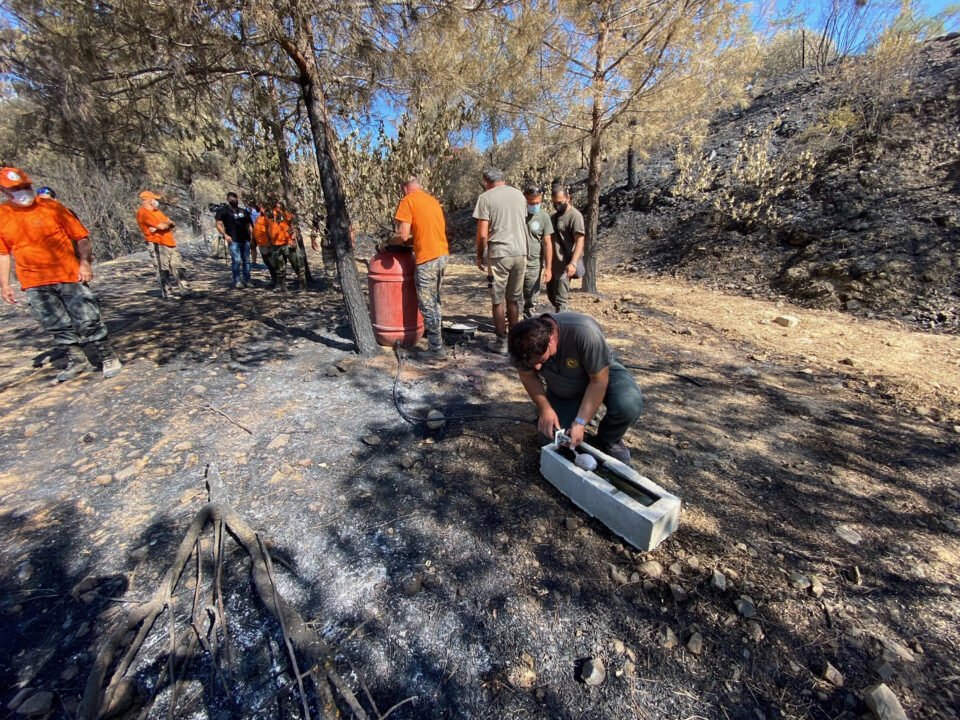 Volunteers on Saturday placed water and feed troughs for animals in the areas that were burned by the fires last week in the mountainous areas of Larnaca and Limassol.

The food and water troughs were donated by various hunters’ associations, the Hunters’ Party and private individuals.

Around 400 volunteers, coordinated by the Cyprus Hunting Federation and Preservation of Wildlife, placed 100 water troughs and 15 tonnes of grains such as vetch, barley, wheat, soybean and corn in various places of the burned areas.

Around 55 square kilometres of forest and private land was burned during the fires last week in and around several villages of the mountainous areas of the Limassol and Larnaca districts, while four people were killed.

“For us hunters, not only game is important, but also reptiles and insects,” the president’s advisor on hunting and wildlife, Antonis Kakoullis told the Cyprus News Agency. He explained that, for the ecosystem to function, insects and the whole cycle of wildlife are needed.

He said after last week’s disastrous fires, he, along with the heads of the Cyprus Hunters’ Federation and the Hunters’ Party organised a very big campaign for the supply of food and water to the surviving game but also the rest of bird fauna.

Head of the Cyprus Hunting Federation and Preservation of Wildlife, Elias Pekris, said they decided to support the fire-afflicted areas, the people but also the fauna and flora. “As regards the flora, we will do it at a later stage,” he said.

Present were also volunteers from Paphos.

Head of the Paphos hunters’ federation, Giorgos Theodosiou stressed that hunters are the biggest ecologists, more than anyone else.

Theodosiou said though some things were inevitable, wished that this were the last fire of such extent. He also wished that the human factor would be eliminated and called for exemplary punishment to perpetrators.

A powerful strategy to beat procrastination

In the footsteps of the ancients: Paphos Archaelogical Park