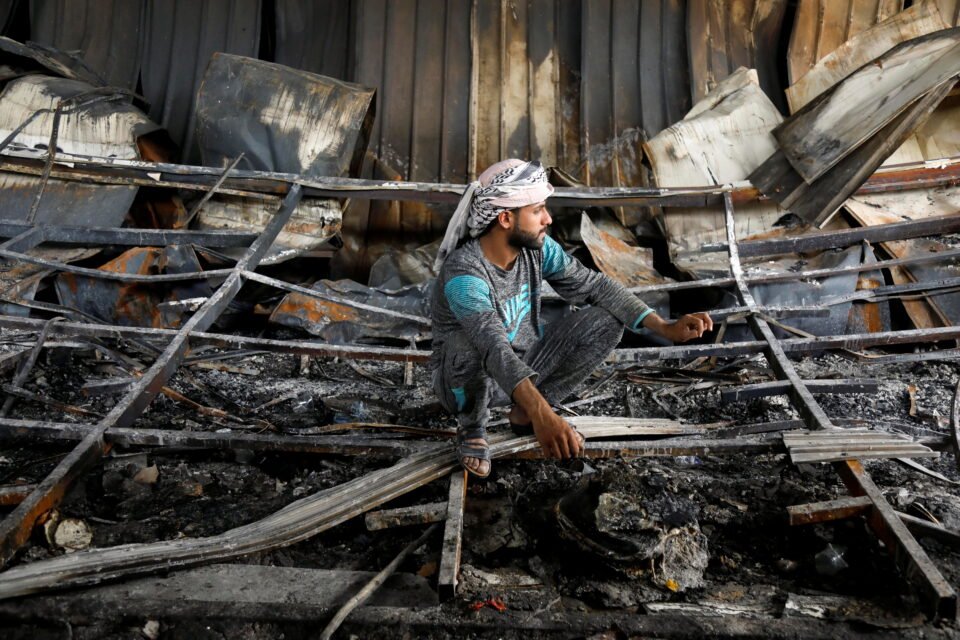 A man looks on as he sits amid the damage at al-Hussain coronavirus hospital where a fire broke out, in Nassiriya, Iraq, July 13, 2021. REUTERS/Khalid al-Mousily

The death toll from a fire that tore through a coronavirus hospital in southern Iraq rose to 92, health officials said on Tuesday, as authorities faced accusations of negligence from grieving relatives and a doctor who works there.

More than 100 people were injured in the blaze on Monday night in Nassiriya, officials said.

An investigation showed the fire began when sparks from faulty wiring spread to an oxygen tank that then exploded, police and civil defence authorities said.

It was Iraq’s second such tragedy in three months, and the country’s president on Tuesday blamed corruption for both. A statement from the prime minister’s office called for national mourning.

Rescue teams were using a heavy crane to remove the charred and melted remains of the part of the city’s al-Hussain hospital where COVID-19 patients were being treated, as relatives gathered nearby.

A medic at the hospital, who declined to give his name and whose shift ended a few hours before the fire broke out, said the absence of basic safety measures meant it was an accident in the making.

“The hospital lacks a fire sprinkler system or even a simple fire alarm,” he told Reuters.

“We complained many times over the past three months that a tragedy could happen any moment from a cigarette stub but every time we get the same answer from health officials: ‘we don’t have enough money’.”

While some bodies were collected for burial, with mourners weeping and praying over the coffins, the remains of more than 20 badly charred corpses required DNA tests to identify them.

In April, a similar explosion at a Baghdad COVID-19 hospital killed at least 82 and injured 110.

“To have such a tragic incident repeated few months later means that still no (sufficient) measures have been taken to prevent them,” Ali Bayati said.

The fact that the hospital had been built with lightweight panels separating the wards had made the fire spread faster, local civil defence authority head Salah Jabbar said.

Health and civil defence managers in the city and the hospital’s manager had been suspended and arrested on Monday on the orders of Prime Minister Mustafa al-Kadhimi, his office said.

Government investigators arrived in Nassiriya on Tuesday, according to a statement. Their findings would be announced within a week, Kadhimi’s office said.

A Nassiriya court said it had ordered the arrest of 13 local officials in connection with the fire.

President Barham Salih on Twitter said both fires were “the result of endemic corruption and mismanagement that disregards the lives of Iraqis”.

At the city’s morgue, anger spread among people gathered as they waited to receive their relatives’ bodies.

“No quick response to the fire, not enough firefighters. Sick people burned to death. It’s a disaster,” said Mohammed Fadhil, waiting to receive his bother’s body.

The blaze trapped many patients inside the coronavirus ward who rescue teams struggled to reach, a health worker told Reuters on Monday before entering the burning building.

In Najaf, a holy Shi’ite city around 250 km (155 miles) northwest of Nassiriya, an angry Imad Hashim sobbed after losing his mother, sister-in-law and niece.

“What should I say after losing my family,” the 46-year-old said. “No point demanding anything from a failed government. Three days and this case will be forgotten like others.”