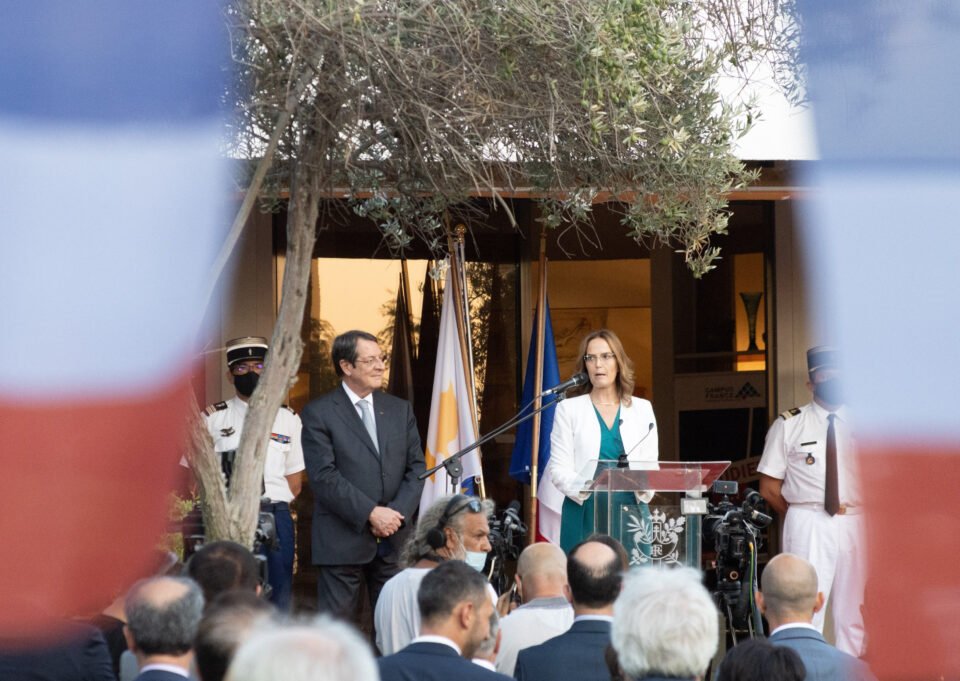 France was always a strategic partner for the Republic of Cyprus and there is a clear political will to further strengthen and expand the already excellent relations on a bilateral, European and multilateral level, President Nicos Anastasiades has said.

Addressing a reception at the French Embassy to mark Bastille Day on Wednesday evening, the President spoke of an ideal opportunity to reconfirm the excellent level of relations on the basis of the strategic agenda signed in 2018. The agenda, he added, determines clear targets of cooperation in fields such as energy, security, economy, education, innovation, culture and diplomacy.

Regarding the participation of the French multinational company TOTAL in Cyprus’ energy programme, President Anastasiades said it has undoubtedly opened up new horizons regarding cooperation in energy issues in the region and France’s presence in MED7. The two countries have closer cooperation in issues of security and defence.

President Anastasiades also referred to the excellent relations of the two countries which is depicted in the successful operation of the French-Cypriot school in Nicosia, noting a second school will operate in Limassol.

The two countries, he added, have a common vision which exceeds bilateral relations or the EU framework for the East Mediterranean basin and the wider Middle East and share the same concerns over developments and the asymmetric threats in the region, as well as the same vision for peace, stability and security. For this reason, he added, one sided unlawful actions that lead to tension and which threaten peace should be avoided by all.

Anastasiades expressed appreciation to French President Emanuel Macron for his longstanding support and solidarity in relation to the violation of sovereignty and the sovereign rights of the Republic of Cyprus.

Referring to the Cyprus problem, he said that despite the deadlock due to the other side deviating from the basis for a solution, he assured that he will make every possible effort to create the necessary conditions to allow the resumption of substantive talks under the UNSG.

On her part and referring to the Cyprus problem, ambassador Salina Grenet-Catalano said that a “solution cannot be found through division. Division means that all sides would be losing.”

She noted that “France, as an EU country and a permanent member of the Security Council, is looking forward to the resumption of negotiations in the framework of the United Nations parameters. Creative ideas or some flexibility will probably be useful as it is the case in any successful negotiation process. But our compass should firmly remain the bi-zonal and bi-communal federation with political equality.”

Today, the French Ambassador added, “there is a risk of a dangerous deadlock given the positions exposed in Geneva. Urgency, determination, maybe some boldness, are then needed more than ever. Not counterproductive and unrealistic preconditions to talks.”

According to Grenet-Catalano, “the reopening of the crossings points after nearly 450 days of closure has been a very positive development,” adding however that “more needs to be done to build trust. Building confidence excludes any actions going against UN resolutions. That is why unilateral decisions regarding Varosha have to be avoided and the matter be dealt with through dialogue”.

In the field of defence, strong strategic ties exist and have been deepened, in particular thanks to the many port calls French navy ships make in Cyprus.

The French military presence in the Eastern Mediterranean, she added, illustrates our enduring commitment to the stability and security of the region. Tensions have recently decreased. Illegal activities have stopped in the last few months. Yet this “détente” should be sustainable. France will remain vigilant and always ready to defend international law through dialogue and mutual respect, she pledged.

Energy, she added is another field that could faster cooperation – and not competition – in the region. France will play its part as a new member of the Eastern Mediterranean Gas forum (EMGF).

She also wished that Cyprus and France could expand their partnership in new areas such as innovation and research.

Natural methods to repel wasps (or live with them, safely)

Polling stations for the presidential election to be set up abroad