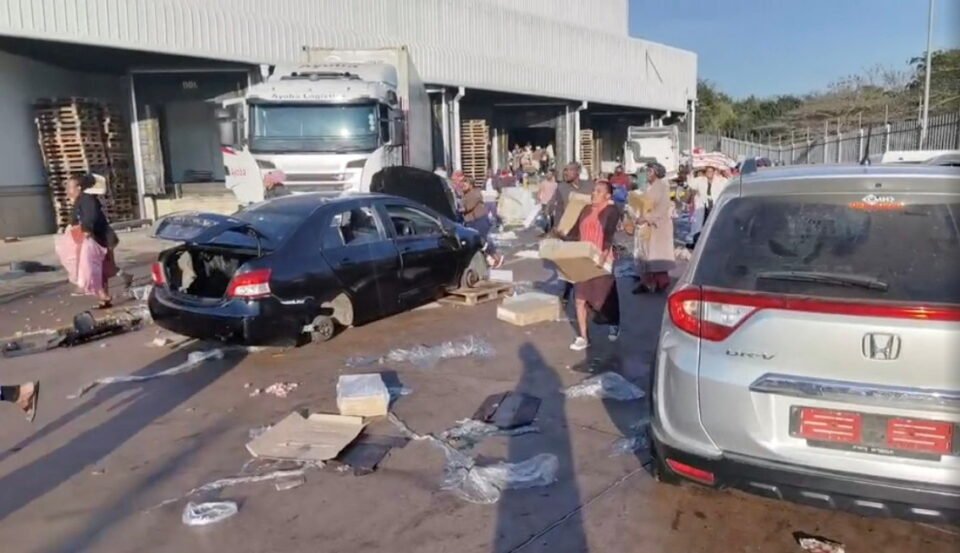 President Cyril Ramaphosa said on Friday he would not allow “anarchy and mayhem” to prevail in South Africa and suggested that a wave of violent unrest that has destroyed hundreds of businesses and killed more than 200 people had been deliberately provoked.

The government was doing everything it could to deal with the turmoil, he said, adding that the looting and arson had severely dented investor confidence and hit the country’s economic recovery.

Ramaphosa was speaking in Ethekwini Municipality that includes the port city Durban, one of the areas worst hit by the unrest.

“We will not allow anarchy and mayhem,” he said.

The president authorised the deployment of 25,000 armed forces members who would be on the streets till Aug. 12, parliament said on Friday.

Police said looting of malls and stores was still going on and foreign-owned shops were being hit.

The unrest broke out in several parts of the country last week after Ramaphosa’s predecessor, Jacob Zuma, was jailed for failing to appear at a corruption inquiry.

It swiftly degenerated into looting and destruction, driven by widespread anger over the poverty and inequality that persist nearly three decades after the end of white minority rule.

Ramaphosa said it was quite clear the incidents were “instigated” and “we are after these people”. He did not specify whom.

He also expressed concern about rising racial tensions in some parts of the country. Some white minority and Indian communities – who are generally better off than the Black community – had armed themselves to fight off rioters.

The long-term social and economic cost of the unrest was also becoming clearer, with calls for the government to address underlying problems to head off more violence and despair.

Wall Street bank JPMorgan said the unrest would force South Africa’s economy to contract by 3% in the third quarter and drag down full-year growth.

The head of the armed forces, Lieutenant General Rudzani Maphwanya, addressing soldiers in Alexandra, Johannesburg, said: “It is no longer just thuggery, this is economic sabotage…It is a threat to our people so you have to restore that freedom.”

“You don’t have to lower your guns.”

The official death toll stood at 180 in KwaZulu-Natal – Zuma’s homeland and main support base – and 32 in Gauteng, which includes Johannesburg, making a total of 212, Khumbudzo Ntshavheni, a minister for Ramaphosa’s office, told a media briefing.

The ransacking of stores has led to shortages of essential goods.

State logistics group Transnet said operations at Durban and Richards Bay ports were improving although road closures and fuel and food shortages were constraining its supply chain. Richards Bay had cleared all its shipping backlogs.

Retailer Massmart said protesters had looted 41 of its stores and two distribution centres, with four sites damaged by arson.

Ethekwini authorities also closed public beaches in north Durban because of a chemical spillage in a lagoon originating from a blaze in a chemical warehouse.

The government has characterised the violence as criminality.

But the Nelson Mandela Foundation – a legacy of the late leader of the anti-apartheid struggle and South Africa’s first Black president – said violence had been growing at “disturbing levels” in the last two decades.

The head of Statistics South Africa, Risenga Maluleke, said it could take years to rebuild damaged infrastructure, and small businesses “will find it difficult to rise from the ashes”.

This would lead to even more unemployment, he said. Most of the people in the streets were youths with few job prospects and limited education opportunities.

Half of South Africans live below the official poverty line and unemployment stood at a record 32% in the first three months of 2021, due partly to the impact of COVID-19.

Zuma, 79, was sentenced last month for defying an order to give evidence at a judicial inquiry probing high-level graft during his time in office from 2009 to 2018.

He has pleaded not guilty in a separate case on charges including corruption, fraud, racketeering and money laundering, saying he is the victim of a political witch-hunt.

His downfall has opened up a power struggle within the African National Congress (ANC), in power since the end of apartheid in 1994. Zuma loyalists make up the strongest faction opposed to Ramaphosa.

His corruption trial will resume in the Pietermaritzburg High Court on Monday.