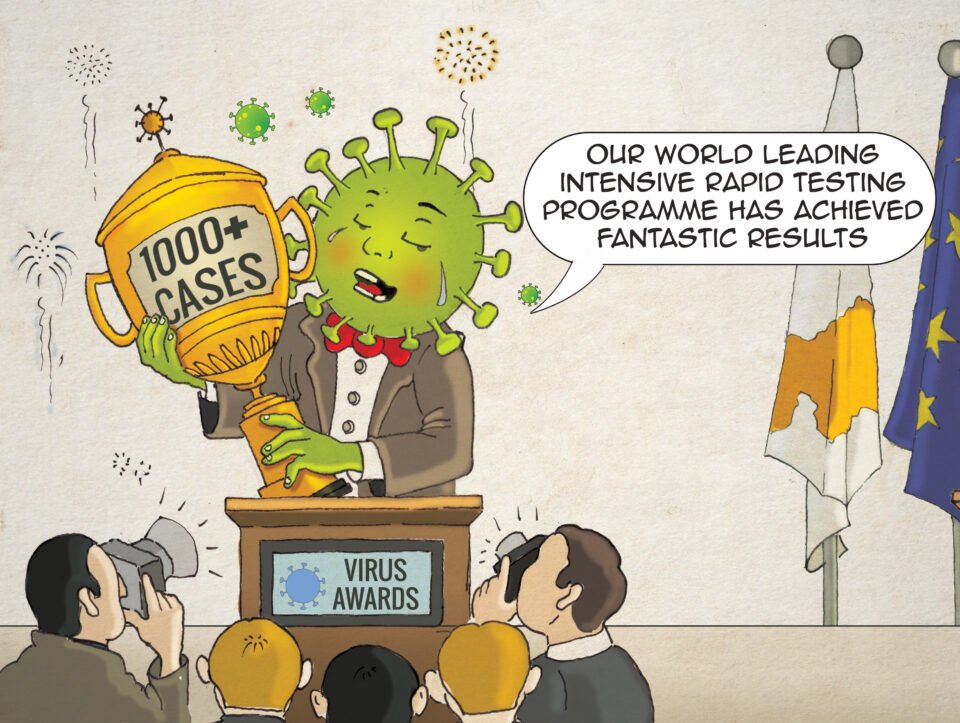 OUR ESTABLISHMENT has put up the price of all our items in order to pay for the muscle we have hired to check that customers have a SafePass. I know it seems a bit excessive but knowing what pedants our customers are about human rights, we decided that we had to have a forceful way of stopping those who wanted to make a point of principle about vaccinations.

From Tuesday, when the SafePass decree comes into force, there will be no refreshing machallepi with triantafyllo or coffee for the unvaccinated. Could they take us to the European Court of Human Rights? I doubt it because our lawyers read through the Convention of Human Rights and nowhere was there mention of the right to enjoy machallepi or Greek coffee.

The SafePass measure has taken Kyproulla to the next level of police state, but it is justified to protect public health and stop the rise of the Covid death toll, which is currently less than one person per day. And what’s worse, is that the state is using citizens – restaurant, bar, café, supermarket owners or employees – to police its measure.

A bit like the Soviet Union where citizens had a duty to act as state informers. The difference here is that they will act as state enforcers rather than informers for the benefit of society, public health and totalitarianism. We have no labour camps to send the unvaccinated to, but if cases continue to rise, we may have set up one or two.

TWO VACCINATED customers – we are already checking them – who visited at different times came up with a quite an incredible theory. They claimed that youths were deliberately becoming infected with the virus so they can secure a SafePass without having to be vaccinated.

It is rather far-fetched, although our two sources were adamant that this was the case. Why are youngsters, whose main purpose in life is to go out and have fun (at least that was the case when I was young) be so fanatically opposed to the vaccine. If I were young, I would have a vaccine that made me grow hair on my back if it gave me a pass to go out and party at night.

A Haravghi columnist had a communist theory as to why youths refused to be vaccinated. The youths of Kyproulla had “proved they had a high sense of responsibility” and the “low proportion of vaccinations among the young is related to the fact that a large section is desperate.” Why are they desperate? One in five were unemployed and “the government with its actions and omissions, has deprived youths of hope.”

The writer never said why the 80 per cent of youth who had a job and had the right to hope did not get vaccinated. They might prove their high sense of responsibility now that they are being offered free air trips, hotel stays and shopping coupons and get the jab.

OUR EFFORTS to put off tourists from visiting our sun-scorched isle gathered momentum in the last week or so with coronavirus cases surging past the 1,000 a day mark.

There might be a new, more transmissible variant about, but having 60,000 tests a day ensured we debited the country with the maximum possible number of cases, that placed it in the dark red category of the European Centre for Disease Prevention and Control (ECDC) which denotes maximum infection risk.

Deputy minister for tourism Savvas Perdios, predicting very difficult times for tourism, said “it is no advertisement for Cyprus that at this moment we are the only country of Europe in the dark red.”

We had another stroke of bad luck on Wednesday when it was reported that 100 crew members of the Royal Navy warship Queen Elizabeth tested positive, despite being fully vaccinated, after partying in Limassol during a stopover.

This was widely reported in the UK press, which as Perdios would say, was no advertisement for Cyprus in our main tourist market. At least nobody claimed there was a new Kyproulla variant that attacks vaccinated Brits. And thanks to Brexit, the UK government kept us in the amber category, ignoring the ECDC categorisation we secured with our brilliant idea for excessive testing.

PREZ NIK has been in a bit of a panic about the illegal visit to the north by his Turkish counterpart, Erdogan, on Tuesday. His panic has been caused by speculation in the Turkish Cypriot press about Erdo’s announcements regarding the opening of the fenced area of Varosha, a development for which he can take all the credit.

When things get tough and the outlook is bleak, Nik always becomes a champion of collective responsibility and decision-making, hence the meeting of national council on Wednesday which discussed ways of reacting. He thanked the national council for agreeing to “jointly and decisively” deal with the announcements that will be made.

“We are alert, we are monitoring and we will react accordingly, based on what he might announce,” said Nik the next day, before introducing a little satire. Asked by hacks what he would advise anxious Famagustans, he said, “be patient.” After all, the patience they have shown for 47 years is beginning to yield results. Who knows, our politicians’ united reaction might secure another lukewarm UN resolution condemning Turkey’s actions.

Ethnarch Junior, meanwhile, remained in the Diko fantasy world warning against any rash decision. “We do not accept the convenient argument that time is working against us and that we must accept whatever is given to us.”

WE WOULD have hoped that our resourceful and well-connected foreign minister, the master of all forms of diplomacy and architect of Kyproulla’s upgraded geostrategic role, would have stepped forward to guide us out of the Varosha crisis, but he has been keeping a low profile. Has he sensed that Varosha does not offer any opportunity for a personal triumph?

It may be because he was too busy pursuing his presidential ambitions. He was at the launch of a book by an Edek intellectual the other night, and a relative of his who was also present posted on social media that she urged him to stand for the presidency.

She wrote: “In the other vital question, if he will be a candidate for the presidency, of course he did not answer but did not rule it out, saying ‘whatever God wishes.’ My response was that God does not choose the candidates. He smiled and restricted himself to giving me the thumbs up…. My good friend AP left this for dessert: You do not have the right to leave us with Foulis [Averof’s nickname]….Nico go ahead even as an independent.”

Are to we deduce that if Nikos Christodoulides decides to stand it would only be after divine intervention?

THE HUMBLE servant of God is not however leaving everything related to his presidential future to the Almighty. A government source informed us that this week Christodoulides asked all the members of CIPA (the Cyprus Investment Promotion Agency) board to hand in their resignations because he planned to replace them.

CIPA was originally under the authority of the commerce ministry, but Christodoulides had arranged for it to come under the foreign ministry, for reasons that are only now becoming apparent. It was not because he wanted to branch out into foreign investment diplomacy.

According to our source, the scheming Christodoulides planned to appoint his own people to the CIPA board as a way of forging links with the business world, the support of which would be needed in the event that it is God’s wish for him to stand in the 2023 presidential elections.

He is doing all the preparatory work now as he must be ready when he receives the go-ahead from up above.

AKEL elected a new leader last Sunday. As expected, the big majority of the comrades backed Stefanos Stefanou, the man who made his name as the government spokesman of comrade Tof. In this role he was obliged to defend the state’s slide to bankruptcy, not to mention the fallout after the Mari explosion.

Comrade Stef-Stef was pretty good at the job and he was a pretty capable spokesman, often having the task of defending the indefensible, but he is an old school Akelite, loyal to the antiquated commie ideas and Cold War mindset of his late boss. And he seems as lacking in leadership qualities as his predecessor, comrade Andros.

This is no bad thing because as we have learned Akelites with leadership qualities could cause great harm to our economy.

THE CHURCH has decided to assist the government’s vaccination crusade with the Holy Archbishopric of Cyprus issuing a circular advising the faithful to get vaccinated.

The circular merely repeated an earlier missive of the Holy Synod on the matter. It reminded the faithful, “paternally and with great love that it is a moral obligation of all of us to rise above individualism, egocentrism, fears and prejudices and join in every possible way the common effort of facing the pandemic.”

The anti-vaxer Bishop of Morphou has been rather quiet recently, but I suspect the churches in his diocese will not be asking for a SafePass to allow people inside.

THE OMBUDSWOMAN had to send a report to the minister of justice after a woman, who had passed the exams for joining the police force, was turned down before taking the physical test because she did not satisfy the 1.60m height requirement. For men it is 1.65m.

She was a centimetre shorter and was rejected, prompting the Ombudswoman to talk about “unjustified discrimination” among candidates. If only this discriminatory requirement applied to presidential candidates, we would have been spared the 10 years of the Spy Kyp presidency.

All eyes on Varosha ahead of Erdogan’s Cyprus visit