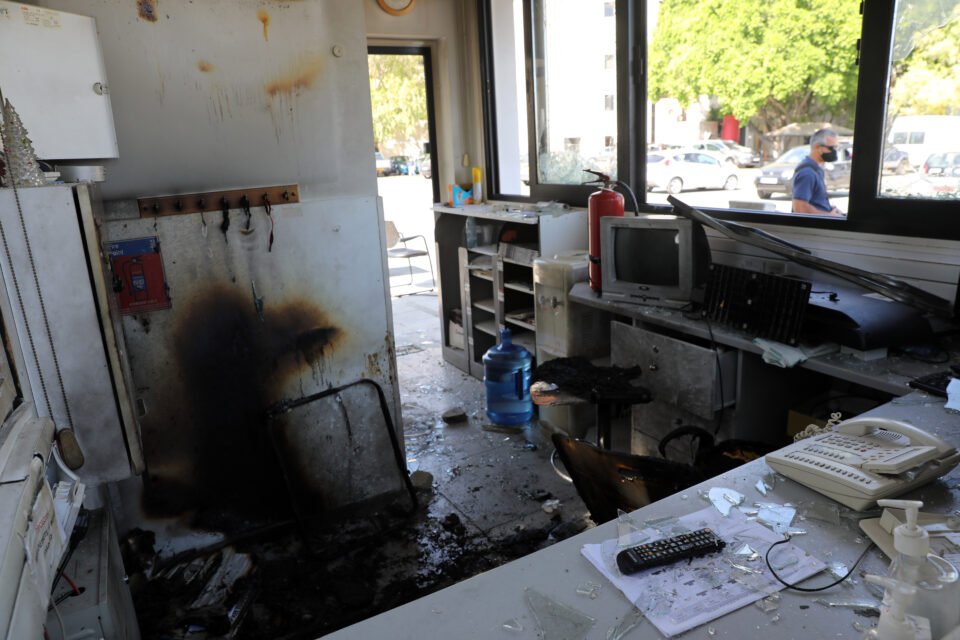 The scene inside the Dias building on Monday

The new arrests brought the total number of suspects detained in the case to 12, aged from 25 to 64 years old.

Seven of the suspects appeared for a remand hearing on Tuesday, including one believed to have broken part of the gate of the Dias building, which houses the Sigma group, police said. Nicosia district court ordered them all remanded for eight days.

One of the people remanded is epidemiologist Elpidoforos Soteriades, who has been generally critical of the government measures in dealing with the coronavirus situation and widely quoted in the media.

Taking the microphone at a huge demo against the SafePass at the presidential palace on Sunday prior to the incidents at Sigma, Soteriades called on the government to supply monoclonal antibodies to Covid patients in the early stage of the disease. He also urged them to stop dividing people and “destroying social cohesion.”

His attorney on Tuesday said his client did not wish to make a statement.

A member of the public told the Cyprus Mail that Soteriades did not participate in the march to Dias.

Another legal source confirmed that police have yet to press charges against the scientist. Soteriades is being held on suspicion of being one of the organisers of the presidential palace gathering.

Four of the seven remanded are suspected of participating in Sunday’s events at Sigma, the other three in connection to the earlier gathering outside the presidential palace.

The first four are suspected of violating the Infectious Diseases law, incitement to the commission of a criminal offence, conspiracy to commit a felony, unlawful assembly, conspiracy to commit a misdemeanor, public disturbance, causing damage to buildings and machinery, arson, malicious damage, possession and transport of explosives, and trespassing.

In asking the court for the remand order, CID officer Gennadios Ioannou said the offences took place on Sunday between 5.30pm and 11pm outside the presidential palace and the Sigma building.

Concerning the latter event, persons caused damage inside and outside the building, as well as to employee cars parked within the perimeter of the complex.

Ioannou said some protesters later returned to the presidential palace, where they threw stones and other objects at police officers.

In connection with four suspects, the officer said they appeared from footage to have unlawfully entered the Sigma building. He added that the evidence so far does not show these four engaged in any damage to property, but further investigation was needed.

Authorities have also published photos of 18 more people wanted on suspicion of breaking and entering into the Sigma building.

The proceedings at Nicosia district court were delayed due to two of the attorneys representing the suspects, as well as two of the suspects, declining the requirement to display a SafePass to enter the courtroom, or take a rapid test, or wear a mask.

Meanwhile four more people were also identified from photos of the protests, and are being sought, police spokeswoman Eleni Constantinou told the Cyprus News Agency.

Nicosia CID have set up an investigative team which includes officers from Larnaca and Limassol CID. The team is collecting and assessing evidence and eyewitnesses statements to identify more people from the attack.

“We call on the public to help the work of the police and if they know anything about the incidents or the persons depicted [in the photos], to contact the citizen’s line at 1460,” Constantinou said.

She explained that information can also be given anonymously and through police’s social media.

Investigations started after a group of protestors vandalised the Dias building at around 9.30pm on Sunday and attacked staff, set fire to cars in the parking lot and trashed the offices.

SigmaLive reported that the material damage at the site amount to “thousands of euros.”

According to the police, 12 officers were injured, of whom seven were taken to hospital and two were in serious condition.

The group of attackers came from the ranks of protesters who were outside the presidential palace earlier on Sunday. Demonstrators there had claimed they wanted an end to “the intimidation, blackmail, and threats of dismissal against public and private sector workers because they refuse to get the jab.”

Police sources said that about 5,000 people participated in the protest at the presidential palace, however people who were there said there must have been about 10,000 demonstrators.

A series of full moon ceremonies