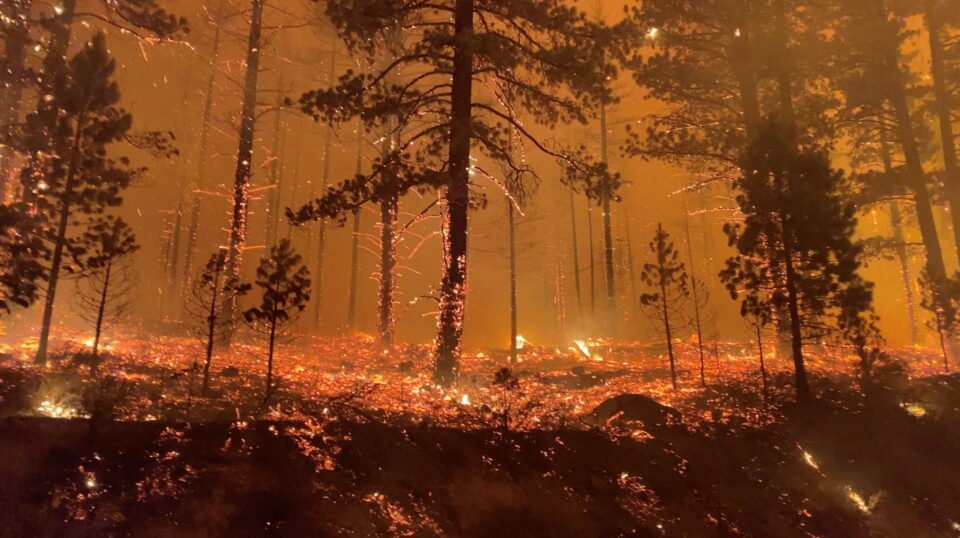 An army of nearly 2,200 personnel battling the so-called Bootleg fire, raging in and around the Fremont-Winema National Forest 250 miles (400 km) south of Portland, increased their containment lines to 25% of its perimeter, up from 22% the day before, the Oregon Forestry Department reported.

“We are fighting the fire aggressively, and there are active efforts to build a containment line, both direct and indirect, wherever it is safe to do so,” agency spokesman Marcus Kauffman said.

But the amount of landscape charred since the blaze erupted on July 6 grew another 40,000 acres on Monday alone to reach an estimated total of almost 340,000 acres (138,000 hectares) – more than half the land mass of Rhode Island, the U.S. Forest Service reported.

Only three other Oregon wildfires over the past century have consumed more acreage, according to state forestry figures.

At last report, the fire had destroyed 67 homes and was threatening 2,460 more. More than 100 outbuildings and other structures have also been lost. An estimated 2,100 people were under evacuation orders on Monday and many more were on standby to be ready to flee at a moment’s notice.

“It was red, like we were on Mars,” evacuee Sayyid Bey, 45, said, recounting the crimson glow of the sky as flames he saw engulfing whole trees closed in on his property on the outskirts of Bly, Oregon, on July 9, raining soot and embers on the small community.

At that point, Bey and his wife packed their three children – aged 6, 11 and 12 – with as many belongings as they could carry into a borrowed pickup truck and sped off down a gravel road out of harm’s way, he said.

He returned later to find his property reduced to ash, along with much of the rest of the wooded mountain enclave of mobile homes and hand-built dwellings called Sycan Estates, Bey said.

A former salesman who left his big-city fashion industry job several years ago to move “off the grid” in Oregon, Bey said he reckoned that at least 60 homes around his were lost. But he said neighbors were already banding together with plans to help one another rebuild.

Homeowners were not alone in finding themselves scurrying into retreat.

Extremely incendiary conditions on Sunday forced some firefighting teams to fall back to safety zones for a ninth straight day and regroup as they “looked for opportunities to re-engage,” incident commander Joe Hessel wrote in his daily report.

“This fire is a real challenge, and we are looking at sustained battle for the foreseeable future.”

The Bootleg stood as the biggest, by far, of 80 major active wildfires that have collectively burned nearly 1.2 million acres in 13 states, according to the National Interagency Fire Center in Boise, Idaho. More than 19,600 firefighters and support personnel are confronting those flames.

The spate of conflagrations, marking a heavier-than-normal start of the Western wildfire season, has coincided with record-shattering heat that has baked much of the region in recent weeks and is blamed for hundreds of deaths.

Scientists have said the growing frequency and intensity of wildfires are largely attributable to prolonged drought and increasing bouts of excessive heat that are symptomatic of climate change. (Graphic on megafires) https://tmsnrt.rs/3hx44Hl

Since starting nearly two weeks ago, the Bootleg fire has thrived from a combustible triad of weather conditions – gusty winds, high temperatures and low humidity – that are expected to persist in the days ahead. Forecasts on Monday added a chance of thunderstorms to the mix.

The cause of the Bootleg was under investigation.