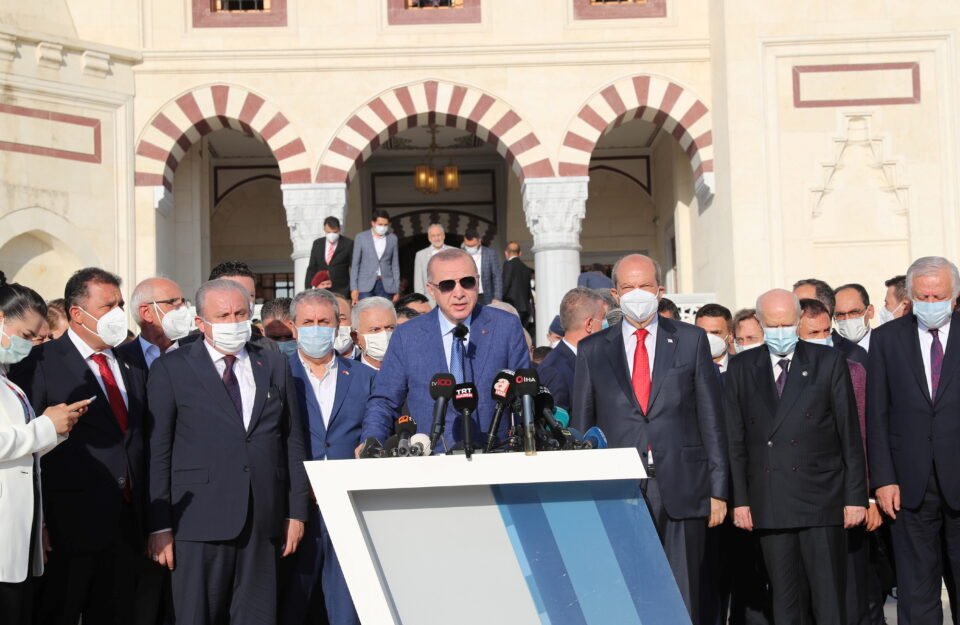 Justice will sooner or later prevail, President Nicos Anastasiades said on Tuesday commenting on the announcement by Turkish Cypriot leader Ersin Tatar that 3.5 per cent of the closed-off town of Varosha will be demilitarised and opened for its Greek Cypriot owners to return.

The move provoked reactions in Nicosia and Brussels.

Speaking at a military parade in the north to mark the 47th anniversary of the Turkish invasion in the presence of Turkish President Tayyip Erdogan, Tatar said “the military zone representing 3.5 per cent of the closed-off Varosha will be abolished, and the second phase of our initiative will start.”

Tatar said owners who apply to the immovable property commission will be eligible to return.

Erdogan said the decision meant a new era for Varosha that would benefit everyone.

“A process will now begin to everyone’s benefit and with respect to ownership rights,” he said.

“Instead of a symbol of non-solution, Varosha will become the symbol of future prosperity.”

Anastasiades, speaking at an event at the Presidential Place to mark the anniversary of the invasion, said that these announcements were nothing but yet another step for the umpteenth time, in violation of the UN resolutions.

He said this was an attempt aimed at instrumentalising human suffering and causing division among Greek Cypriots, “something I have no doubt (Erdogan) will not achieve, because I am sure that no Varosha refugee would want to be an accomplice in Turkey’s plans and goals.”

He said that if Erdogan’s and the Turkish Cypriot leadership’s concern, as they claim, was truly to return the property to its rightful owners, Turkey would have implemented resolutions 550 and 789 by handing over the city to the UN which could allow refugees return to their properties under secure conditions.

He said the government has already briefed EU High Representative Josep Borrell, each of the other 26 members states but also the five permanent members of the Security Council.

He also referred to Erdogan’s statements and his “baseless claims.” Anastasiades said Cyprus was wronged many times but that sooner or later, justice would prevail. Anastasiades has convened the National Council for Wednesday, where, he said they will discuss measures.

EU High Representative Josep Borrell expressed his deep concern over the announcements made by Erdogan and Tatar, saying it was “an unacceptable unilateral decision to change the status of Varosha.

“The EU continues to be guided by the relevant UN Security Council Resolutions with respect to Varosha, which must be respected in full,” he said, adding that no actions should be carried out in relation to Varosha that are not in accordance with those resolutions.

The EU, he said, continues to hold the government of Turkey responsible for the situation in Varosha. “The EU will follow tomorrow’s closed consultation of the UN Security Council on Cyprus closely and decide on next steps accordingly,” he said.

“The EU calls for the immediate end to restrictions on the freedom of movement of Unficyp imposed in the Varosha area, so that the mission may patrol and implement its mandated activities.”

“This runs contrary to UN Security Council resolutions & risks undermining the Cyprus Settlement process. We are discussing this urgently with Security Council members,” he said in a tweet.

The Greek foreign ministry also condemned the announcement about Varosha “in the strongest terms.” It said that this was a blatant violation of resolutions 550 and 789, as well as of the Conclusions of the European Council, which call on Turkey to refrain from unilateral and provocative actions that destabilise the region.

Erdogan accused the Greek Cypriot side of rejecting a solution on the basis of equality, adding that any new process should be on the basis of two equal states as Turkey did not have “another 50 years to waste” on the Cyprus issue.

“No one should expect from Turkish Cypriots to give up their equal status and sovereignty, and to accept to live as a minority as per the will of the Greek Cypriots,” he said.

“The Greek Cypriots could not wake up from the ignorance of seeing Turkish Cypriots as a minority and rejecting a solution on the basis of equality.”

Famagusta mayor Simos Ioannou, in the meantime, called for action through the Security Council.

“Things are very difficult we need to act immediately,” the mayor told state broadcaster CyBC. He said it was necessary to turn to the Security Council “and we must put pressure on the permanent members for a resolution that does not weaken the previous ones.”

The Committee of Occupied Municipalities called on the government and the entire political leadership “to rise up to the circumstances” and take all appropriate steps at European and international level, to put a brake on Turkey’s brazen attitude towards Famagusta and the Cyprus issue in general. They said that only with very strong reaction that “will we be able to prevent such catastrophic actions, protect the refugee world and secure a better future for all our people.”

Coronavirus: Pfizer accounts for most jabs and side effects seen in Cyprus (updated)