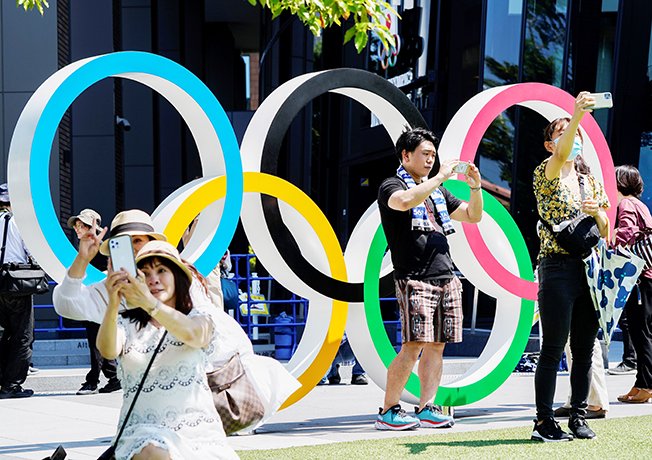 People take selfies in front of the Olympic Rings monument near the National Stadium in Tokyo, No fans and only a few VIPs will be present in the 68,000 capacity stadium for Friday's opening ceremony

Battered by scandal on the eve of the opening ceremony, Tokyo 2020 organisers have the chance to patch up the Games’ image when they reveal who will carry the Olympic flame for the final few steps to light the stadium’s cauldron.

The identity of the final torchbearer is one of the Games’ most closely held secrets yet speculation has swirled for months around well known athletes such as former Seattle Mariners baseball player Ichiro Suzuki and Shohei Ohtani of the Los Angeles Angels, the latest Japanese player to woo the United States.

One sports figure who might be able to soften public resentment over the hosting of the Games during the pandemic is four times Grand Slam tennis champion Naomi Osaka.

With a Haitian father and Japanese mother, Osaka represents what a more modern and more diverse Japan looks like.

The build-up to the Games has been marked by a string of gaffes by organisers.

On the eve of the opening ceremony, the event’s director was fired https://www.reuters.com/lifestyle/sports/japan-former-pm-abe-will-not-attend-games-opening-ceremony-nhk-2021-07-22, after comments he made about the Holocaust in a 1990s comedy sketch resurfaced and sparked a public outcry.

Days earlier, the ceremony’s composer stepped down after comments he made in interviews in the 1990s about abusing and bullying classmates were circulated on social media.

Former Tokyo 2020 chief Yoshiro Mori was forced to quit early this year after he made sexist comments about women talking too much which caused global outrage.

Japan has also come under fire for holding the Olympics in the midst of the pandemic. Two thirds of people said they doubted that Japan could host a safe Games, with more than half saying they opposed the Olympics going ahead, according to a poll by the Asahi newspaper.

Yet some commentators have called for a non-celebrity, who would represent the country’s recovery from the 2011 earthquake and tsunami that caused the Fukushima nuclear disaster, devastated Japan’s northeast coastline and killed nearly 20,000 people.

Japan made a similar choice in 1964 – the last time Tokyo hosted the Games – when Yoshinori Sakai, a 19-year-old college athlete born in Hiroshima on Aug. 6, 1945, the day of the U.S. atomic bombing, brought the flame into the stadium.

Whoever carries the torch on Friday, the new stadium, built on the same site as the one used for the 1964 Games, will be nearly empty, with only around 950 people, mostly officials and journalists, watching in the stands.

Yet the torchbearer’s face will likely be seen by hundreds of millions of people watching around the world.

What problems can Bitcoin solve?