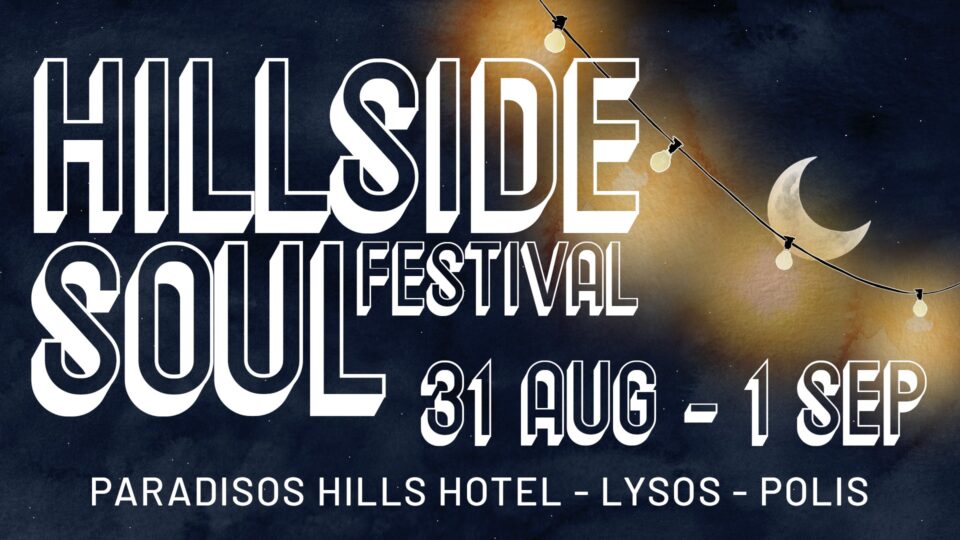 This summer, The Paradisos Hills Hotel in Lysos Village in Paphos will host a two-night music event that promises performances from some of the best bands and artists that Cyprus has to offer. The Hillside Soul Festival coming up on August 31 and September 1 is a soul-music orientated happening yet will also encompass other styles and genres – from Reggae and Latin, to RnB and Funk – and back again!

Unlike traditional music festivals, Hillside Soul will be a seated, outdoor, banquet style occasion, held on the large stone terrace of the hotel, which has the backdrop of the Polis Mountains and breathtaking views down to Akamas.

On each night, the stage will feature two different bands, with performances starting just after the sunset at 7.30pm. The first evening will feature Trio Frisson, one of the leading Soul bands in Cyprus, who have built up a following across the island with their original blend of Soul, Reggae, Groove, Hip-Hop and RnB. Dynamic acoustic band La Luna Trio will also perform on August 31, bringing interesting new favours to classic and popular songs, while drawing influence from Funk, Soul and Jazz.

September 1’s music line up includes the Erika Soteri Band with frontwoman Erika who is often described as a powerhouse performer and singer-songwriter, who fuses a timeless retro sound with a modern fair. She recently gained exposure, following her success on the popular TV show, The Voice of Greece.

Also on the second evening is the Loop Station Project by Stephanos Georgiades, a guitar player and vocalist who uses live looping to build musical layers into an orchestral soundscape that blends Soul, Reggae and Pop music. In 2006 he established the name Loop Station Project for his live looping act but is also the lead singer and guitar player for the local band Delirium Elephants.

Organising the whole festival is in fact one of the festival’s performing musicians – Jamie Paul, the singer, songwriter and keyboard player of Trio Frisson. The idea behind the festival is to support the musician community of the island by bringing people together once again and entertaining the masses, doing what they do best.

“Cyprus is home to a lot of talented artists,” says Paul, “and getting them back on the stage to perform is vital to sustaining the arts, culture and entertainment industry here. In thinking of ways to create more opportunities and platforms for all of us, I have collaborated with the Paradisos Hills Hotel in Lysos Village to come up with a new format for a Live Music Festival.

“The event will be held as an outdoor, sit-down, banquet style event, in-line with current restrictions and measures. We’re hoping it will give people the feeling of that all-important shared experience and connectedness, that live music can bring, whilst at the same time keeping everyone feeling safe and relaxed. There will also be a three-course buffet served on each night, from the hotel’s highly regarded kitchen (included in the ticket price). So we’re trying something new, the concept is live music with soul, the event is Hillside Soul Festival… “

An outdoor bar will also serve speciality cocktails, along with the usual selection of beers, wines and spirits and if you’d like to spend the night hotel rooms are available to book. If you don’t wish to drive back to Paphos, there will be a minibus shuttle service that will run from Polis and Paphos, especially for the event.

Woman wanted in US arrested on arrival in Cyprus