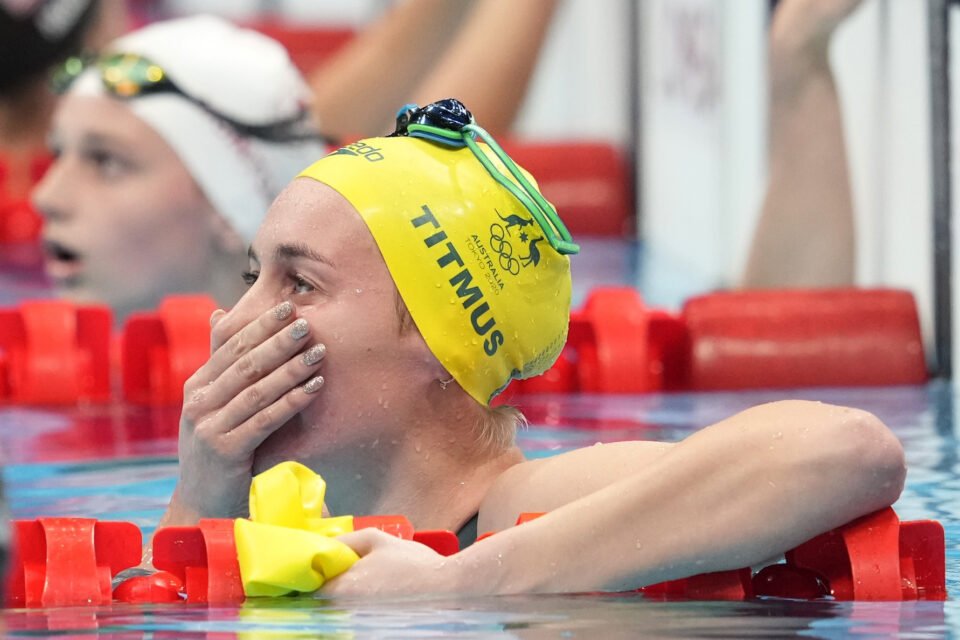 Ledecky has been the dominant force in women’s swimming in recent years but in the first of three head-to-head showdowns with Titmus at these Games it was the Australian who triumphed with a superbly timed swim.

Britain’s Adam Peaty delivered another dominating swim to repeat his gold medal success from Rio in the 100m breaststroke while Canadian Maggie MacNeil stormed to victory in a close women’s 100m butterfly and the United States triumphed in the men’s 4x100m relay.

The first mouthwatering matchup between Ledecky and Titmus exceeded all expectations.

The American great was 0.66 seconds ahead at the halfway point but Titmus then began to reel her in, closing the gap to 0.16 seconds by the 300m turn, grabbing the lead at the 350m mark and powering home for gold.

“I can’t believe it, I’m trying to contain my emotions,” said Titmus, who praised her rival for raising the bar in the sport.

“I thanked her, I wouldn’t be here without her. She set this incredible standard. All credit to her for the swimmer she is.

“In the race I tried to stay as composed as I could and I can’t believe I pulled it off,” she added.

Ledecky will expect to get her revenge in the 800m freestyle but could face another defeat to Titmus in the 200m.

She said she was not down on herself despite losing her crown.

“I had a tremendous race. I can’t be disappointed with that, it was my second best race ever,” she said. “I fought tooth and nail but she swam such a good race. I expected a close race.”

There was much less drama for Peaty, utterly dominant in the 100m breaststroke, whose time of 57.37 was well short of his own world record 56.88 but comfortably ahead (0.63) of silver medallist Arno Kamminga of the Netherlands.

“I did feel a little pressure into the final but it’s a good pressure,” said Peaty.

“You can do whatever you want in your own pool, in your own nation, in your own race. I’m not racing for a time, I’m racing myself … it’s not about a time its about a race,” he said.

Kamminga’s reaction to his silver was indicative of Peaty‘s dominance in the event: “I’m over the moon. It feels like I won gold,” he said.

The United States delivered an emphatic win in the men’s 400 free relay, cruising home 1:14 ahead of Italy with Australia taking bronze.

Caeleb Dressel got the Americans off to a flying start and Blake Pieroni and Bowe Becker held onto the lead before Zach Apple’s impressive 46.69 final leg secured victory in a time of 3:08.97.

In the women’s 100 butterfly China’s Zhang Yufei lead at the halfway mark with MacNeil trailing in seventh but the Canadian produced a brilliant turn to power away from her rivals and pip Zhang by five one-hundredths of a second.

Australia’s Emma McKeon was not far behind, taking bronze just 0.13 behind the winning time.

“It was incredible. I touched the wall and heard my name so I think I did something good,” said the Canadian, who won the event at the 2019 World Championships.

“I don’t have words right now. I don’t think it will sink in for a little while,” added MacNeil, who also won silver on Sunday as part of Canada’s 4x100m freestyle team.

The Swede, competing at her fourth Olympics, had surgery for a broken elbow suffered falling on ice in February, leaving her out of the water for months.

“I did everything I physically could, I couldn’t do anything more … I needed to be ice cold,” she said.