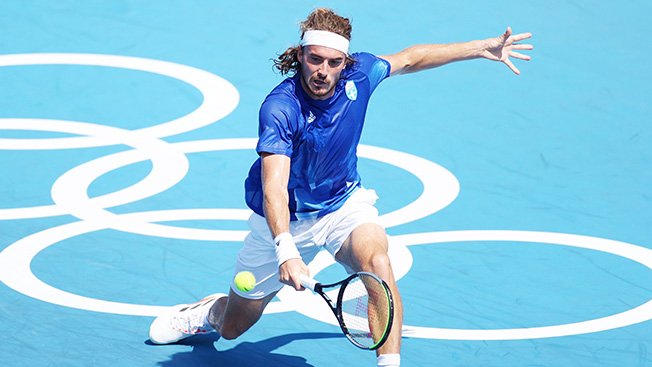 French Open finalists Stefanos Tsitsipas and Anastasia Pavlyuchenkova bowed out of the Olympic singles on Wednesday, while world number two Daniil Medvedev advanced but was one of several players to struggle with the hot and humid conditions.

Medvedev, competing for the Russian Olympic Committee team, said he had difficulty breathing during his 6-2 3-6 6-2 win over Italian Fabio Fognini at the Ariake Tennis Park.

The 25-year-old was leading 5-2 at the start of the contest when he received treatment after requesting a medical timeout.

“Even from the first set, I didn’t feel good enough with my breathing,” said Medvedev. “That’s why I called the physio, I felt like my diaphragm was blocked. I couldn’t breathe properly.”

He went on to serve out the first set but did not seem comfortable in the second, calling for the trainer again shortly before being broken by Fognini to take the match to a decider.

Medvedev was in better form in the final set, breaking the Italian’s serve twice to seal the victory and set up a meeting with Spain’s Pablo Carreno Busta in the quarter-finals.

Greece’s Tsitsipas, who was beaten 2-6 7-6(4) 6-2, took a nasty tumble on court at set point in the second set tiebreak. He was unable to recover, going down a double break to lose the match against Frenchman Ugo Humbert in the decider.

The 22-year-old, who made the men’s final at Roland Garros before losing to Novak Djokovic, will compete in the mixed doubles with Maria Sakkari later on Wednesday.

Japan’s Kei Nishikori, the host country’s last hope for a singles medal, moved into the quarter-finals with a 7-6(7) 6-0 win over Ilya Ivashka of Belarus.

Pavlyuchenkova, the French Open women’s finalist, lost 6-0 3-6 6-3 in the quarter-finals to Belinda Bencic of Switzerland. Bencic will play either Spain’s Garbine Muguruza or Elena Rybakina for a spot in the gold medal match.

Ukraine’s world number six Elina Svitolina, the fourth and highest surviving seed in the women’s singles draw, also advanced with a 6-4 6-4 win over an error-prone Camila Giorgi of Italy.

The newly-wed Svitolina, watched on in the match by husband and French tennis player Gael Monfils, said she felt no extra pressure after top seeds Ash Barty, Naomi Osaka, and Aryna Sabalenka were sent out in earlier rounds.

“You know when you are higher ranked everyone wants to beat you and everyone is extremely motivated to beat you,” she said.

“I had that for the past three, four years already, when I entered the top 10. I just try to focus on my game and not think so much about what’s going on in the other side of the net.”

She next plays Czech Marketa Vondrousova, who advanced after her Spanish opponent Paula Badosa retired due to illness.

In the men’s doubles quarter-finals, Britain’s Andy Murray and Joe Salisbury lost to Croatians Marin Cilic and Ivan Dodig 4-6 7-6(2) (10-7) in a supertiebreaker.