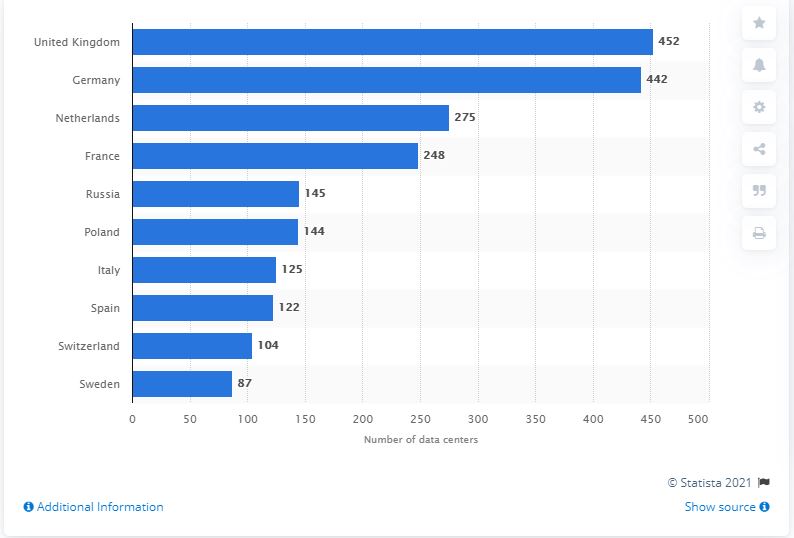 Number of data centres in Europe by country: Statista

“Secondary locations in Europe are set for growth as the continued trajectory of Europe’s five main markets – doubling in size in under five years – is unsustainable. Demand for lower latency connectivity means there’s more demand for so-called edge data centres, which are smaller and closer to the urban populations they serve.”

JLL is a real estate research company with a specialisation in data centres. They have shared their analysis and stats with Cyprus 4.0 on the 2020-2021 data centre market.

There was insatiable demand for data centres in 2020,” JLL analysts said. Ab- sorption reached 619.3 MW in the United States and 201.2 MW in Europe. Despite initial slowing and leasing backlogs amid the pandemic, enterprise colocation demand picked up in the second half of the year.

Absorption (MW) by US market, year-end 2020
The construction pipeline reached near-record levels in 2020, with 611.3 MW under construction in the United States. Northern Virginia has 326.0 MW under construction, an increase of over 400 per cent since 2019.  In  Europe, 83.0 MW of new supply was added to Frankfurt inventory in 2020. The market currently leads the region with 117.8 MW under construction. M&A activity and operator investment remain robust. Global M&A activity in the data centre sector surpassed $30 billion as of November 2020, including Digital Realty’s record-setting $8.4 billion deal with Interxion. The top data centre REITs continued to outperform other sectors throughout 2020 amid the pandemic.

JLL identified key themes in the year end of 2020 Insatiable cloud demand across the globe In North America, cloud dominated demand in 2020 and will continue to expand in primary markets in 2021. Atlanta, Phoenix, and Chicago recorded large land purchases where new facilities will meet cloud demand. Despite initial slowing and leasing backlogs amid the pandemic, enterprise colocation demand picked up in the second half of 2020.

While cloud demand thrived in 2020, enterprise level demand slowed as over-all IT spend declined globally. According to Gartner, overall IT spend declined by 5.4 per cent due to the pandemic’s impact on organisations’ budgets. However, re-entry and vaccination roll-outs could lead to a strong re-bound in 2021 as cloud migration keeps momentum.

Both colocation providers, offering data storage space to rent to multiple companies, and hyperscalers like Google and Microsoft are now looking for space to grow.

In Ireland, for example, TikTok is building a $500 million data centre. Amsterdam, Dublin, Frankfurt, London and Paris remain preferred locations, with take-up forecast to rise by around a third both this year and next year, according to JLL data. took Amsterdam to become the second biggest colocation provider, increasing its space by 18 per cent on 2019 and has seen the highest take-up of space of Europe’s five major markets.

However, less established markets such as Madrid, which has grown by five per cent since 2019, are coming into play as viable alternatives.

Secondary locations in Europe are set for growth as the continued trajectory of Europe’s five main markets –doubling in size in under five years – is unsustainable. Demand for lower latency connectivity means there’s more demand for so-called edge data centres, which are smaller and closer to the urban populations they serve.

Securing the right space remains a challenge in urban areas where developers face competition from the residential and warehousing sectors. The Municipality of Amster- dam,   for example,   initially blocked planning permission for data centres due to concerns of power consumption and land availability. In an already intensely competitive market, such restrictions have further challenged those looking to enter the sector, while driving up land prices in already core and sought-after markets.

At the same time, data centres themselves have their own needs. Capital expenditure on equipment and infrastructure within the industry is set to reach $200 billion globally by 2024, ac- cording to a Dell’Oro Group report.

Rising construction costs are a risk factor
Data centres were already expensive to build (albeit worth every penny). The average-powered base building of a data centre typically ranges from $125-$200 per square foot. But infrastructure is the real cost hog. Once you add in the switchgear, redundant chillers and generators, and other equipment, an N+1 data centre (which means full capacity plus a component

In the end, it’s all about trust: Data centres and public cloud in Cyprus