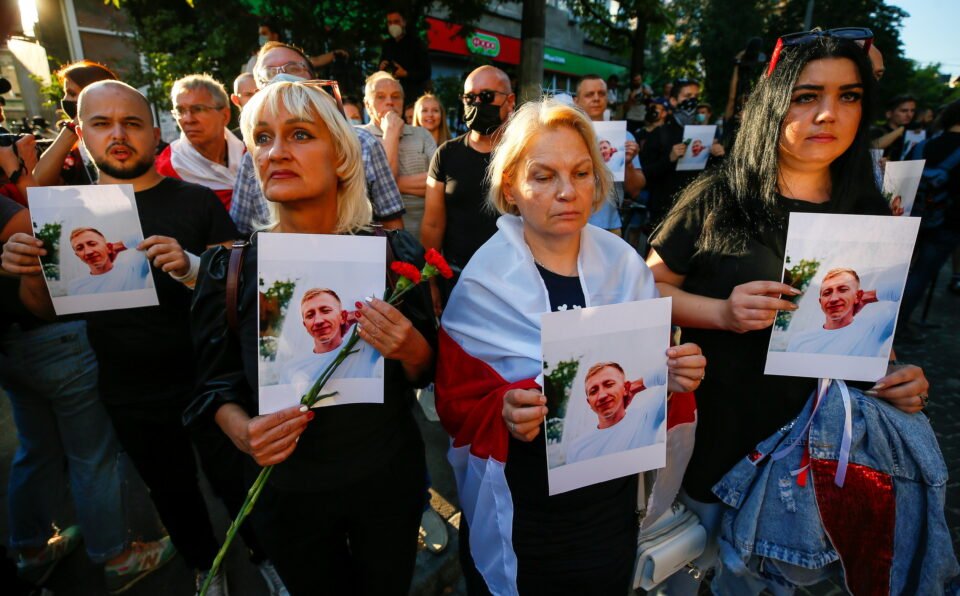 Activists attend a rally next to the Belarusian Embassy to Ukraine to commemorate Vitaly Shishov in Kyiv, Ukraine August 3, 2021. REUTERS/Gleb Garanich

A Belarusian activist living in exile in Ukraine was found hanged in a park near his home in Kyiv early on Tuesday, and Ukrainian police launched a murder investigation.

Vitaly Shishov, who led a Kyiv-based organisation that helps Belarusians fleeing persecution, had been reported missing by his partner on Monday after failing to return home from a run.

Police said they were considering the possibility of suicide or of a murder staged to appear as suicide. Shishov had been found with abrasions on his nose and knee but it was too early to determine whether he had been attacked, Ukraine’s national police chief, Ihor Klymenko, told a briefing.

Shishov, 26, had felt under constant surveillance since he left Belarus last year after taking part in anti-government protests, his colleagues said. He had been warned about possible threats, including being kidnapped or killed.

Ukraine, Poland and Lithuania have become havens for Belarusians during a security crackdown by President Alexander Lukashenko following a disputed election last year. Tens of thousands of people have been detained and leading opposition figures are either in jail or living abroad.

“It is worrying that those who flee Belarus still can’t be safe,” exiled opposition figure Sviatlana Tsikhanouskaya said on Twitter ahead of a meeting in London with British Prime Minister Boris Johnson. She said the death could be a crime.

Speaking to Reuters on Tuesday, she said a non-violent transition to democracy from Lukashenko’s “hell” was possible in the former Soviet republic. “When we put enough pressure on the regime there will be no other way out.”

Shishov’s death was reported by the Belarus official news agency Belta, but the Minsk authorities did not otherwise comment. Lukashenko’s spokesperson could not be reached.

In May a dissident journalist, Roman Protasevich, was detained by Belarusian security forces after his flight from Greece to Lithuania was forced to land in Minsk. This week, a Belarusian athlete took refuge in Poland’s embassy in Tokyo after refusing her team’s orders to fly home from the Olympics.

“We were also repeatedly warned by both local sources and our people in the Republic of Belarus about all kinds of provocations, including kidnapping and liquidation,” a BDU statement said. “Vitaly treated these warnings stoically and with humour.”

Ihor, 24, a fellow Belarusian exile who had known Shishov since last October, told Reuters Shishov knew he was under surveillance, recounting instances of his car being followed or his girlfriend being approached by strangers while they were staging protests in Kyiv.

“Lukashenko’s regime is at war, and he is at war. He is at war with anyone who can offer any resistance,” said Ihor, who gave only his first name.

Ukrainian police chief Klymenko said Shishov had not informed the police about his suspicion of being under surveillance, nor were police aware of any foreign agents tracking him.

Shishov’s organisation had announced a day earlier that he had gone missing. Shishov had left his residence at 9 a.m. (0600 GMT) and was supposed to have returned an hour later.

Belarusian authorities have characterised anti-government protesters as criminals or violent revolutionaries backed by the West, and described the actions of their own law enforcement agencies as appropriate and necessary.

“The death takes place amid an unacceptable Belarusian crack down on civil society, and we look forward to a complete and thorough investigation by Ukrainian authorities to establish its causes and circumstances,” the U.S. Embassy in Kyiv said.