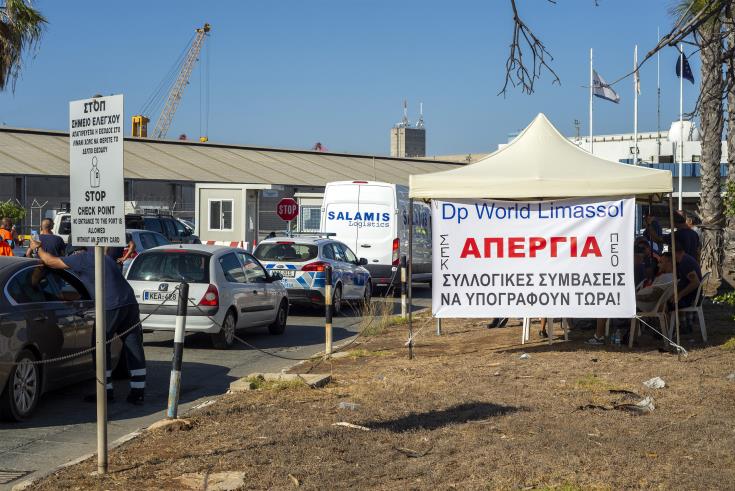 A strike that began at Limassol port on Monday continued into Tuesday with port operator DP world saying it was trying to resolve the issues as quickly as possible.

The strike, according to the workers is management’s non-compliance with collective agreements but also due to a number of unilateral additions and subtractions that took place shortly before the agreement was signed.

DP World Limassol expressed regret  over the work stoppage, stating that the goal was to resolve the dispute as soon as possible. At the same time, the company noted that it had proceeded with the implementation of an emergency plan to ensure continuity of operations as much as possible.

In a statement, it said: “Regarding the unscheduled work stoppage at the DP World Limassol terminal since Monday, August 2, 2021, we would like to point out that all of our staff ‘s concerns are taken very seriously and we regret this development.”

“We are doing everything we can to resolve the situation as soon as possible and reduce the impact on the operation of the port,” he added.

On the other hand, Sek union representative Yiannis Tsouris said the workers’ struggle remains and will continue. He also stated that, so far, no serious interventions had been made to lift the strike measures.

“We want to believe and we certainly hope that some actions will be taken and the strike will be resolved because from the first moment we had said that the purpose of the workers was not to paralyse the port, not to strike, but to claim the obvious and resolve their problems,” he added.

“We request the intervention of the ministry of labour and for the company to respect the 11 months of direct discussions it had with us and what we had agreed in principle. We are asking for intervention and not mediation,” he said.

This is the union’s response to the ministry’s comment that the if the strike measures are not lifted, it could not mediate.

The reality, Tsouris said, was the refusal of the company, which was notable by its failure to engage, to sign an agreed text.

Peo union representative, Christos Christofi, ssaid the position of the workers was clear. The pressure can’t always be brought to bear on the employees, he said.

He called on all those involved to exert pressure “where it should be exerted”, adding: “If they want the good of the economy we should not be on strike because it was just a matter of a signature, but it seems that the economy is paying for the whims of some.”

In the morning, workers arrived at the port who had been called in by the association of shipping agents to serve ships. However, the strikers prevented them from entering. Christofi characterised this move as unacceptable.

Despite the strike, two of the cruise ships at the port were serviced in the morning without any problems, while container ships are still waiting, many of which carry perishable items.

The app that tells you if your cat’s happy