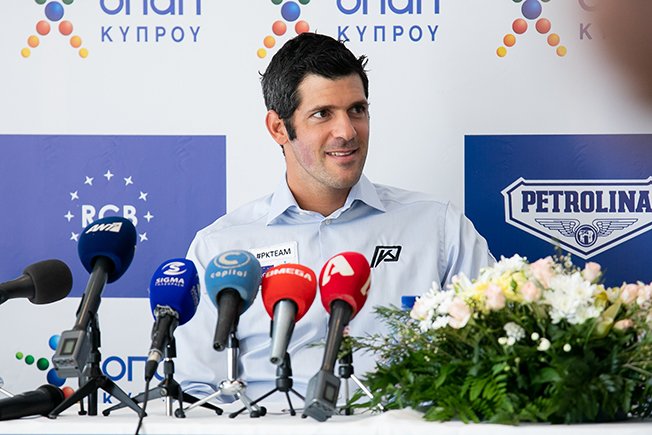 Pavlos Kontides speaking at the Limassol Nautical Club on Friday

“Now that raw emotions have subsided, I realise how big a success fourth place at an Olympic Games is,” said Cyprus sailing star Pavlos Kontides at a press conference at the Limassol Nautical Club on Friday.

“I thank people for the many messages of support. It gives me stubbornness and impetus to continue for Paris 2024,” said Kontides, who was speaking on the nine-year anniversary of his London 2012 silver medal.

The Limassol native also commented on the controversial decision by Olympic laser judges to disqualify him from the event’s seventh race, while he was leading, for pumping.

“There’s no need to bother and waste energy on something you can’t change. I had only a few minutes until the next race and I may have been momentarily angry but I calmed down and had a very good result in the next race,” he said.

Kontides’ father was also at Friday’s press conference and he said: “Usually younger people learn from us, however, I learned from Pavlos that we must manage undesirable situations. It’s been days since I realised this and I thank him for this lesson,” Dr Panayiotis Kontides, leader of the Cypriot sailing team at Tokyo 2020 added.

Asked about whether he plans to compete at Paris 2024, Pavlos said: “First you need good health to complete the preparation you want. The first goal is always to give your best, because the podium is not just up to you, as we saw in Tokyo.

“At the end of the medal race I felt empty. I deserved a medal. But I gave it my all, 100%. I always say you have to give it all away, and that’s what I did. This made me feel better than I expected,” said Kontidis, adding: “After the race I was approached by Robert Scheit, winner of five Olympic medals and winner of 12 world championships. He told me to be proud of my performances and that I was the only one who could compete with the Australian gold medal winner Matt Wearn. I don’t need to add anything else.”

Kontides also thanked all those who supported him in Tokyo.

This was followed by a review of the five years since Rio 2016 and a reference to the two world championships, three world cups, the pan-European championship and the Rolex World Sailor of the Year titles won in that time.

“It’s been a difficult time recently. The coronavirus is here and I stayed in Croatia and turned the house into a gym.
“Last July I felt in great shape but we had to wait another year. That’s where the mishaps started. I’ve never talked about them before.
“On August 15, I broke my left elbow, falling off the bike. I stayed out of the water for two months. Towards the end of the year I missed ten days of training because I was in contact with a case of coronavirus. In February I didn’t feel well.”

For Kontides, the current season is not over yet. After a few days off, it’s back to the action at the European Championship and then the World Championship.

“The intention is to continue the programme for Paris 2024 as I want to see our Cyprus Olympic team grow and exceed the 15 people we had in Tokyo,” Kontides explained.

Finally, he thanked his multi-member team in Cyprus and Croatia “for doing everything else so that I can sail without problems”.

He stood privately with his coach Jozo Jakelic, whom he described as a second father and said “I owe him a lot for who I am today.”

One in five children at risk of poverty, social exclusion