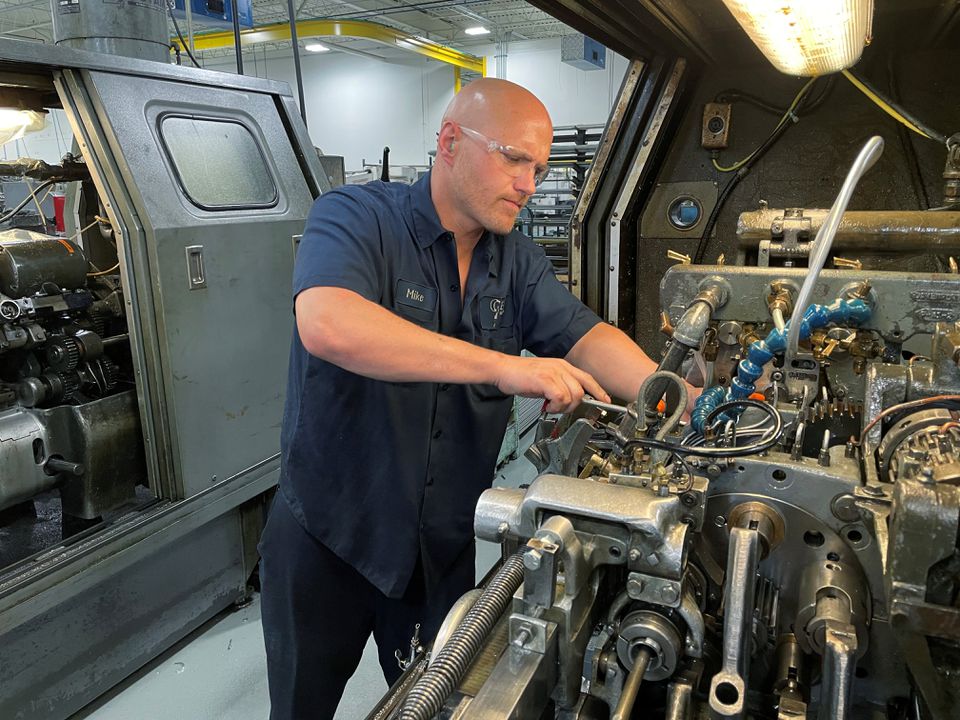 When researchers from the Massachusetts Institute of Technology visited Rich Gent’s machine shop here to see how automation was spreading to America’s small and medium-sized factories, they expected to find robots.

“In big factories – when you’re making the same thing over and over, day after day, robots make total sense,” said Gent, who with his brother runs Gent Machine Co, a 55-employee company founded by his great-grandfather, “but not for us.”

Even as some analysts warn that robots are about to displace millions of blue-collar jobs in the U.S. industrial heartland, the reality at smaller operations like Gent is far different.

Among the 34 companies with 500 employees or fewer in Ohio, Massachusetts and Arizona that the MIT researchers visited in their project, only one had bought robots in large numbers in the last five years – and that was an Ohio company that had been acquired by a Japanese multinational which pumped in money for the new automation.

In all the other Ohio plants they studied, they found only a single robot purchased in the last five years. In Massachusetts they found a company that had bought two, while in Arizona they found three companies that had added a handful.

Anna Waldman-Brown, a PhD student who worked on the report with MIT Professor Suzanne Berger, said she was “surprised” by the lack of the machines.

“We had a roboticist on our research team, because we expected to find robots,” she said. Instead, at one company, she said managers showed them a computer they had recently installed in a corner of the factory – which allowed workers to note their daily production figures on a spreadsheet, rather than jot down that information in paper notebooks.

“The bulk of the machines we saw were from before the 1990s,” she said, adding that many had installed new computer controllers to upgrade the older machines – a common practice in these tight-fisted operations. Most had also bought other types of advanced machinery – such as computer-guided cutting machines and inspection systems. But not robots.

Robots are just one type of factory automation, which encompasses a wide range of machines used to move and manufacture goods – including conveyor belts and labeling machines.

Nick Pinkston, CEO of Volition, a San Francisco company that makes software used by robotics engineers to automate factories, said smaller firms lack the cash to take risks on new robots. “They think of capital payback periods of as little as three months, or six – and it all depends on the contract” with the consumer who is ordering parts to be made by the machine.

This is bad news for the U.S. economy. Automation is a key to boosting productivity, which keeps U.S. operations competitive. Since 2005, U.S. labor productivity has grown at an average annual rate of only 1.3% – below the post-World War 2 trend of well over 2% – and the average has dipped even more since 2010.

Researchers have found that larger firms are more productive on average and pay higher wages than their smaller counterparts, a divergence attributed at least in part to the ability of industry giants to invest heavily in cutting-edge technologies.

One barrier for smaller companies is finding the skilled workers needed to run robots. “There’s a lot of amazing software that’s making robots easier to program and repurpose – but not nearly enough people to do that work,” said Ryan Kelly, who heads a group that promotes new technology to manufacturers inside the Association for Manufacturing Technology.

To be sure, robots are spreading to more corners of the industrial economy, just not as quickly as the MIT researchers and many others expected. Last year, for the first time, most of the robots ordered by companies in North America were not destined for automotive factories – a shift partly attributed to the development of cheaper and more flexible machines. Those are the type of machines especially needed in smaller operations.

And it seems certain robots will take over more jobs as they become more capable and affordable. One example: their rapid spread in e-commerce warehouses in recent years.

Carmakers and other big companies still buy most robots, said Jeff Burnstein, president of the Association for Advancing Automation, a trade group in Ann Arbor, Michigan. “But there’s a lot more in small and medium-size companies than ever before.”

Michael Tamasi, owner of AccuRounds in Avon, Massachusetts, is a small manufacturer who recently bought a robot attached to a computer-controlled cutting machine.

“We’re getting another machine delivered in September – and hope to attach a robot arm to that one to load and unload it,” he said. But there are some tasks where the technology remains too rigid or simply not capable of getting the job done.

For instance, Tamasi recently looked at buying a robot to polish metal parts. But the complexity of the shape made it impossible. “And it was kind of slow,” he said. “When you think of robots, you think better, faster, cheaper – but this was kind of the opposite.” And he still needed a worker to load and unload the machine.

For a company like Cleveland’s Gent, which makes parts for things like refrigerators, auto airbags and hydraulic pumps, the main barrier to getting robots is the cost and uncertainty over whether the investment will pay off, which in turn hinges on the plans and attitudes of customers.

And big customers can be fickle. Eight years ago, Gent landed a contract to supply fasteners used to put together battery packs for Tesla Inc (TSLA.O) – and the electric-car maker soon became its largest customer. But Gent never got assurances from Tesla that the business would continue for long enough to justify buying the robots it could have used to make the fasteners.

“If we’d known Tesla would go on that long, we definitely would have automated our assembly process,” said Gent, who said they looked at automating the line twice over the years.

But he does not regret his caution. Earlier this year, Tesla notified Gent that it was pulling the business. “We’re not bitter,” said Gent. “It’s just how it works.”

Gent does spend heavily on new equipment, relative to its small size – about $500,000 a year from 2011 to 2019. One purchase was a $1.6 million computer-controlled cutting machine that cut the cycle time to make the Tesla parts down from 38 seconds to 7 seconds – a major gain in productivity that flowed straight to Gent’s bottom line.

“We found another part to make on the machine,” said Gent.