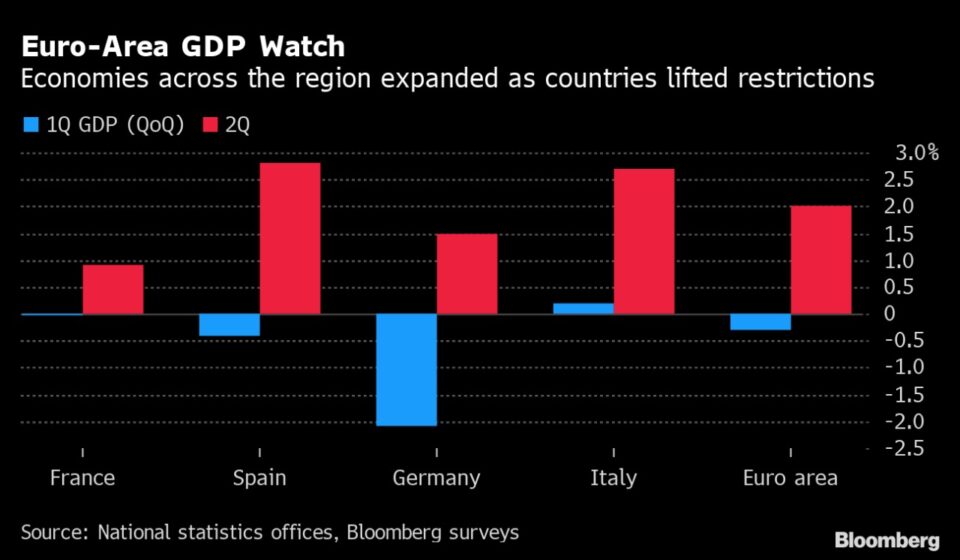 For the euro area, as in the world as a whole, output is recovering back toward the pre-pandemic trajectory, economists have predicted.

“While the Delta variant means the picture could change quickly,” said Bjorn Van Roye and Tom Orlik, economists at Bloomberg Economics, “for now, the data is flagging a positive start to the third quarter, with the global recovery accelerating, and inflation moderating.”

For Cyprus, although output was still flat in the second quarter of this year, annual growth is still forecast at 4.3 per cent. Inflation jumped in July in Cyprus  increasing four per cent, but still remaining in line with that of the rest of Europe.

Global gross domestic product in the third quarter is on track for a 1.8 per cent expansion from the previous three months, according to   Bloomberg Economics.

The euro area isn’t quite keeping up with the big boom that the US is seeing, but “the pace of growth still accelerating. At the same time, inflation is picking up in the euro area, but not to such elevated levels as those seen in the US, the economists said.

According to economists at the OECD, growth will be moderate in the euro area, and slower in the UK. The latest Composite Leading Indicators from that organization show signs of moderating pace of growth from above-trend levels.

Price pressures rose by the most since the survey began 25 years ago – a concern for the Bank of England as it finalises new inflation forecasts due on Thursday. To date, the BoE has said higher inflation will be temporary.

The IHS Markit/CIPS services Purchasing Managers’ Index (PMI) sank to 59.6 in July, its lowest reading since March, from 62.4 in June. The broader composite PMI, which includes Tuesday’s manufacturing PMI data, showed a similar drop, to 59.2 from 62.2.

Britain’s economy is rebounding fast after suffering its biggest fall in output in more than 300 years in 2020, but most economists think the fastest growth probably came in the three months to June, when Covid rules eased most.

Germany’s economy will perform significantly better than the average of the euro area during the coronavirus crisis, according to a report released by the ZEW data centre on August 6. The German economy is expected to be about 1.5 per cent below the pre-coronavirus value of real GDP at the end of 2021 and about 2.8 per cent above it at the end of 2022.

All of these forecasts presuppose that the Delta variant will not create a threatening surge in the coming months.  However, because of the high vaccination rate in Europe, the probability of such a surge is declining, economists say. Vaccination rates sufficient for approaching herd immunity are likely to be reached in advanced economies and some developing economies from the third to the fourth quarters of 2021.