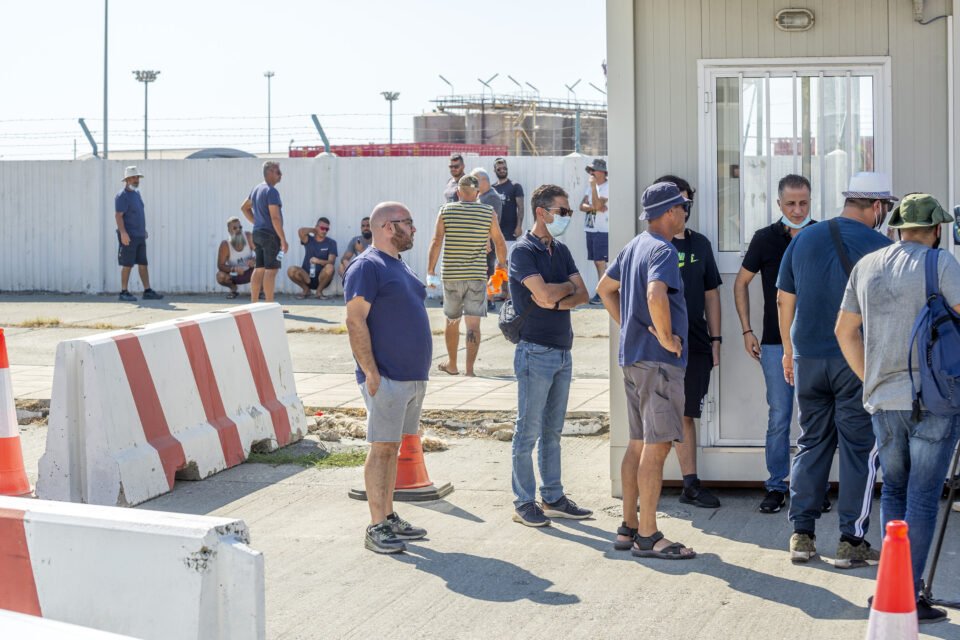 A standoff between Limassol port workers and their employer appeared deadlocked on Thursday, after the latter turned down overtures from the labour ministry to reinstate four recently sacked workers and to agree to talks.

Limassol port workers meanwhile warned that a new strike they began on Wednesday afternoon would be indefinite as the labour ministry called on DP World – operators of the port terminal – to suspend the four staff dismissals that prompted the new industrial action.

Employees and union representatives remained outside the terminal on Thursday after workers walked out Wednesday afternoon, a week after their collective agreement was signed following three days of strike action.

The new unrest was sparked after the company, which manages the general cargo and cruise terminals, decided to make four employees redundant. Union leaders called the move “an act of revenge” by the company as the four – all union members – had been heavily involved in the earlier strike.

In statements outside the terminal, the general-secretary of PEO union, Athos Eleftheriou, expressed his dissatisfaction and disappointment with the company’s attitude.

“The company’s decision to lay off four people was against the industrial relations code while a dispute was pending,” he said, while he referred to the labour department’s letter which asked for the suspension of the dismissals and called for a meeting on Monday 23 August.

The labour department wrote to the company asking them to suspend the dismissals and inviting the two sides to enter a dialogue.

The Cyprus Mail learned later in the afternoon that the company rejected the department’s proposal.

Before that, Eleftheriou had said:  “We demand the withdrawal of dismissals and if any issues arise, we are ready for dialogue within the framework of the respective legislation and the labor relations code.  If so, the employees will immediately go back to work.”

Also earlier, SEK union’s Limassol district secretary Yiannis Tsouris, said he was satisfied with the labour ministry’s response, adding that “what remained now was a positive response from the company.  “DP World Limassol should show goodwill to resolve this labour dispute,” he said.

“The perishable products from the containers are in refrigerators and for now and there is no problem there. The responsibility for all this is on the company’s side,” he added.

The walk-out on Wednesday, also caused a problem to a vessel carrying six horses, which had returned from an international competition. Eventually, the strikers agreed the six horses could be disembarked from the ship at around 9pm on Wednesday night.

Green Party MP, Stavros Papadouris, who was present, spoke to Cyprus Mail about the incident. “We were informed by the owners that the six horses were in danger due to their long stay on the ship. The container with the horses was far inside the ship and some others had to be moved first in order for the workers to be able to reach them,” he said.

“We fully understand the demands of the workers, we consider their strike to be completely reasonable and we stand on their side, but the issue was quite serious, and an exception had to be made.” Papadouris said that the attitude of the union members was very helpful in solving the problem.

At the same time, Marios Georgiou, one of the owners of the horses, told the Cyprus Mail that the horses were all in good health before the incident. On Monday night the horses had been boarded on a ship at the port of Lavrio in Greece, which left for Cyprus on Tuesday with a 12-hour delay. When it arrived in Cyprus, they waited for another four or five hours to disembark, staying in the ship for a total of more than two days.

“The conditions inside the ship were tough. Two of the horses are now at the vet, although they will most probably survive. The horses participated in competitions in Greece, Bulgaria, and Italy. They were already very tired from the trip, and a further delay could have been fatal,” Georgiou noted.

“MP Stavros Papadouris was on the spot from the first moment. The members of the unions, but also the intervention of the minister of transport helped so there was a positive ending,” he added.

SEK’s Tsouris said: “There was no reason, to keep the horses inside, under these conditions. so around 9 pm, by a unanimous decision of the strikers, the six horses disembarked and left the port.