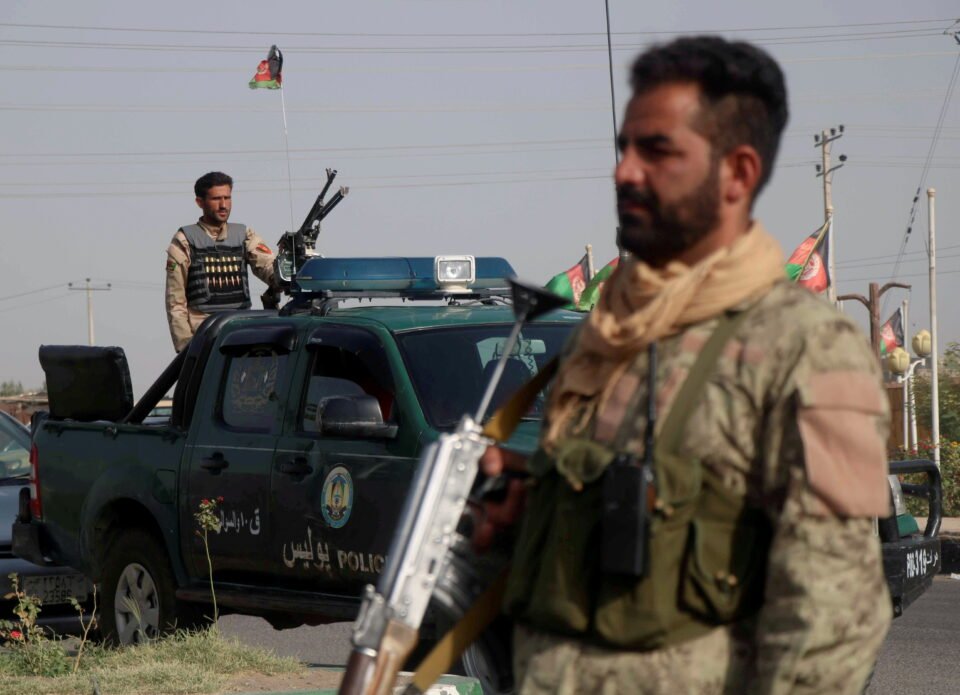 Afghan government forces battled Taliban fighters in and around several cities on Thursday, officials said, as the militants pressed on with their offensive that U.S. intelligence believes could see them take over the capital, Kabul, within 90 days.

The speed of the Taliban advance – they have captured eight provincial capitals in less than a week and are threatening to take at least three more – has sparked widespread recriminations of U.S. President Joe Biden’s decision to withdraw U.S. troops and leave the Afghan government to fight alone.

The Taliban control about two-thirds of Afghanistan, with the last of the U.S.-led international forces set to leave by the end of the month, and their guerrilla army has waged war on multiple fronts, resulting in thousands of families fleeing the provinces in hope of finding safety in the capital, Kabul.

“Fighting did not stop until 4 a.m. and then after the first prayers it started up again,” said an aid worker in the southern city of Kandahar.

Fighting has been extremely intense in Kandahar city, a doctor based in the southern province said earlier. The city hospital had received scores of bodies of members of the armed forces and some wounded Taliban. The Taliban said they had captured Kandahar’s provincial prison.

The Taliban also said they had captured Ghazni city, 150 km southwest of Kabul. Gunfire could be heard in the background, as Reuters spoke to the provincial governor’s spokesman. He said the militants had captured the prison there too.

The Taliban said they had captured airports outside the cities of Kunduz and Sheberghan in the north and Farah in the west, making it even more difficult to supply beleaguered government forces.

The Taliban said they had also captured the provincial headquarters in Lashkargah, the embattled capital of the southern province of Helmand, a hotbed of militant activity. Government officials were not immediately available for comment.

Bordering Pakistan, Kandahar and other southern and eastern provinces have long been Taliban heartlands but it has been in the north where they have made their biggest gains in recent weeks.

Faizabad city, in the northeastern province of Badakhshan, on Wednesday became the eighth provincial capital to be seized by the Taliban.

Desperate to stem the Taliban’s advance, President Ashraf Ghani flew to Mazar-i-Sharif to rally old warlords to the defence of the biggest city in the north as Taliban forces closed in.

Ghani spent years sidelining the warlords as he tried to project the authority of his central government over wayward provinces.

President Biden said on Tuesday he did not regret his decision to withdraw and urged Afghan leaders to fight for their homeland.

Even when the Taliban ruled the country they did not control all of the north. This time, they appear to be determined to secure it fully before turning their attention to Kabul.

In Washington, a U.S. defence official on Wednesday cited U.S. intelligence as saying the Taliban could isolate Kabul in 30 days and possibly take it over within 90, following their recent rapid gains.

“But this is not a foregone conclusion,” the official said, speaking to Reuters on condition of anonymity, adding that the Afghan security forces could reverse the momentum by putting up more resistance.

All gateways to Kabul, which lies on a plain surrounded by mountains, were choked with civilians fleeing violence, a Western security source said, adding that there was a risk Taliban fighters could be among them.

“The fear is of suicide bombers entering the diplomatic quarters to scare, attack and ensure everyone leaves at the earliest opportunity,” he said. The Taliban, who controlled most of Afghanistan from 1996 to 2001, when it was ousted for harbouring al Qaeda chief Osama bin Laden after Sept. 11, wants to defeat the U.S-backed government and reimpose strict Islamic law.

A new generation of Afghans, who have come of age since 2001, is worried that the progress made in areas such as women’s rights and media freedom will be lost.

The United Nations said more than 1,000 civilians had been killed in the past month, and the International Committee of the Red Cross said that since Aug. 1 some 4,042 wounded people had been treated at 15 health facilities.

The Taliban denied targeting or killing civilians and called for an independent investigation.