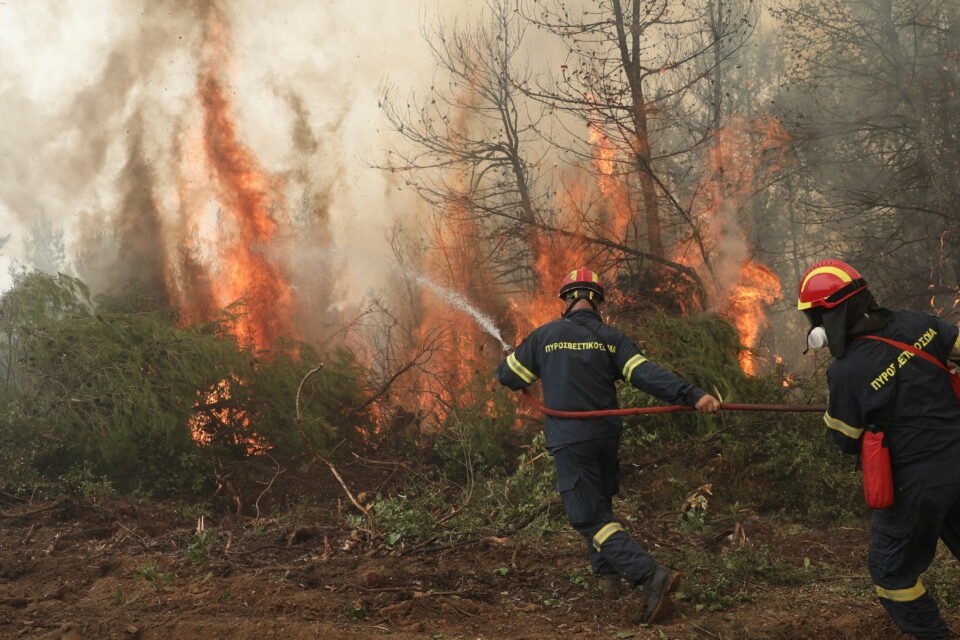 Firefighters on the Greek island of Evia last week

The Mediterranean will be particularly affected with higher summer temperatures, drought and fires says IPCC report

The UN’s Intergovernmental Panel on Climate Change (IPCC) issued a landmark report on Monday on ‘Climate Change 2021’. The report brings-out some stark messages: Climate change is not a problem of the future. It is here and now and is affecting every region in the world. It is especially felt in the Mediterranean where record high temperatures have contributed to a massive surge in wildfires.

The report states that it is no longer possible to stop global warming from intensifying over the next 30 years – with some devastating impacts now unavoidable – but there is still a short window to stop things from getting even more harrowing.

The planet has already heated by about 1.1 degree Celsius since 1900, with the main contribution coming from burning fossil fuels – coal, oil and gas – for energy.

This summer alone, abnormal heatwaves have killed many people in the US and Canada; floods have caused devastation in Germany, Belgium and China, and wildfires have been raging out of control in Siberia, Turkey and Greece.

But, according to the report, that is only the beginning. Even if the world heeded the warnings and started cutting emissions sharply as from today, global warming is likely to rise around 1.5C by 2040. This is happening faster than expected and the IPCC states that essentially this may be locked-in, increasing the risk and frequency of extreme weather considerably.

Unfortunately, with 1.1C increase in global temperatures already locked-in, there is no going back from some of the climate changes that are already happening, which, disturbingly, are expected to become more common.

But the report still gives hope. The world can still prevent the planet from getting even hotter through coordinated actions by all countries to eliminate greenhouse gas (GHG) emissions by 2050. This would require an immediate and sustained shift to clean energy, away from fossil fuels.

Without such action, global average temperatures will keep rising, on average to as much as 3C by 2100. The consequences will be that hundreds of millions of people will be exposed to even more severe floods and heat waves, worsening droughts and accelerating sea-level rise that could threaten the existence of some island nations.

The IPCC report brings out the urgent need to deal with this crisis that will only get worse with every small rise in global temperatures.

Impact on oil and gas

The report has increased pressure on the future of exploration, production and use of oil and gas. This will add to the strong criticism that oil and gas producers have been facing from climate change groups.

In a statement, Antonio Guterres, UN Secretary General, said “This report must sound a death-knell for coal and fossil fuels, before they destroy our planet. Countries should end all new fossil fuel exploration and production, and shift fossil fuel subsidies into renewable energy.”

Energy industry leaders stressed the need for a rapid move towards a new energy system. They include Bernard Looney, BP’s CEO, who called for urgent action, saying “now is the time to act,” highlighting the importance of greening oil and gas companies, driving down emissions and transiting to net-zero by 2050.

Given the growing strength of climate change activism, court action and increasingly hostile policies, oil and gas face an existential crisis in Europe and to a lesser extent in the US.

But this is not the case in Asia, where rapid economic growth, especially post-Covid-19, is accompanied by rapid growth in energy demand, including oil and gas and even coal. Indicative of this is that the national oil companies of Asia and Russia have remained silent on the report.

Overcoming dependence on oil and gas demands radical transformation of how the world gets and uses its energy. But unless clean energy uptake sees dramatic improvements, this is not going to happen overnight.

These developments are bound to put even more pressure on countries around the East Med to re-evaluate the future of their hydrocarbon resources and their exportability. Increasingly, the right model appears to be maximisation in the use of renewables, with natural gas providing a supporting role during transition.

Impact on the Mediterranean

Europe and the Mediterranean region are experiencing one of their hottest summers ever, bringing with it a massive increase in wildfires.

The eastern Mediterranean is particularly vulnerable to climate change, with the IPCC calling it a “climate change hot-spot.” Remaining unchecked, average temperature increases could be two-thirds higher than the global average, reaching 3.5-7C by the end of the century, with extremely high temperatures becoming the norm – with all their consequences.

The IPCC report finds that, increasingly, the Mediterranean will be experiencing higher summer temperatures, drought, fires and air pollution in comparison to global averages.

By the beginning of August, more than 1100 fires were recorded in Europe – 300 more than the recent annual average total. Many of these were in Turkey, Italy and Greece, with the last two recording more than double their annual average of ‘area burnt’. If anything, the frequency of fires is expected to worsen. Mediterranean countries are exposed to increased climate change risks that also have long-term economic consequences as pointed out this week by the credit-rating agency Moody’s.

What must be done

Cutting GHG emissions to net-zero by 2050 is essential to stabilise the planet’s long-term temperature. But we should have no illusions: such measures will be costly, they may prevent extreme weather events from getting worse, but will not mean they will stop happening.

Even if the global average temperature increase is limited to 1.5C, the world will need to get used to and become more resilient in dealing with extreme events. Heatwaves and floods are set to become more common in Europe, while wildfires are expected to intensify across the Mediterranean.

Steps can and must be taken to reduce the chances of certain disasters, such as forest fires, from occurring – especially through early detection and where these are sparked by poorly maintained power lines. The chronic lack of resources must be addressed.

Governments and policymakers must prepare and put in place policies and measures to adapt to climate change and deal with such events, including better means for detecting and dealing with wildfires than now. Both preventative and response measures must be vastly improved. If the problems are not going to go away, we must learn to live with them and limit their impact as far as possible. Current policies and measures have been found to be wanting.