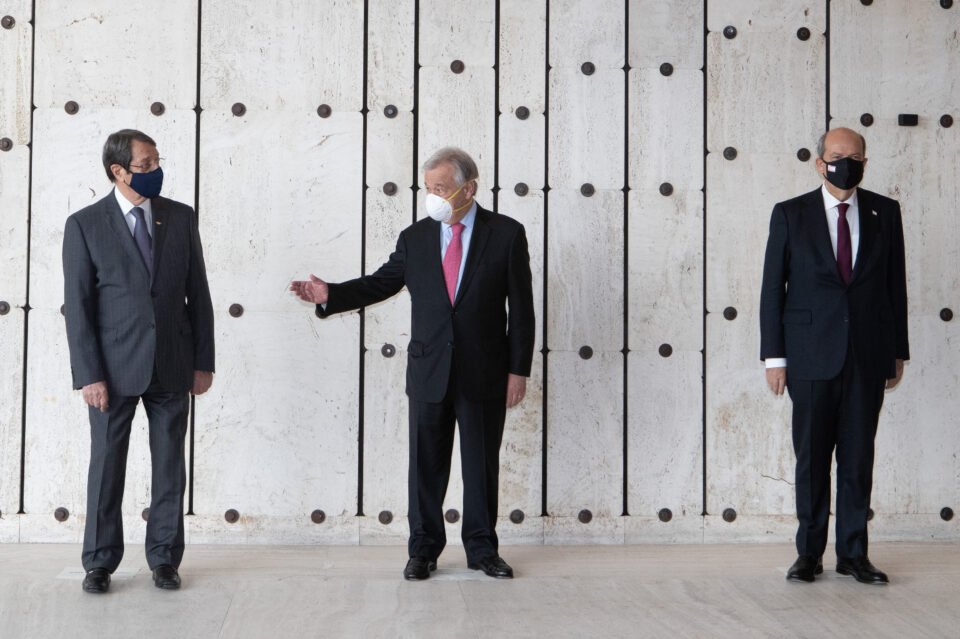 Three scenarios are being considered in the diplomatic arena with the aim of resuming Cyprus talks, according to latest reports and speculation ahead of the UN General Assembly in New York next month, and the arrival of UN envoy Jane Holl Lute ahead of that.

According to Phileleftheros, citing their sources, Britain is leading the way in trying to have the process kick-started by taking advantage of the fact that the two leaders will be in New York, as will UN Secretary-General Antonio Guterres.

The first of the three scenarios would see the two leaders exchange letters of intent to commit to a new process where the positions of both sides are presented, which would allow the UN to begin a new process.

However, given that the position of both sides could not be further apart, this scenario is likely to be shelved, the report said.

The second scenario being looked at was issuing a joint statement after meeting Guterres that would lay down the basis for talks going forward. Again, however the two sides have differing views on what constitutes the basis for talks.

The Greek Cypriot side wants negotiations to pick up where they left off in Crans-Montana in 2017 bases on a bi-communal, bi-zonal federation, and the Turkish Cypriot sides wants talks on the basis of a two state solution.

The third scenario, the report said, was that Guterres would invite the two sides to talks without entering into any details or input from either side.

“It will be, according to informed sources, a statement that will be characterised by constructive ambiguity,” the report said.

It added that the British Foreign Officer preferred the second scenario – a joint statement from the two leaders.

The team at the Foreign Office is said to have already drawn up a text, which will be presented to those involved at a later stage but before New York.

“The British note that the aim is to start talks and everything else will happen along the way,” said the report.
But , it added, that Guterres is said to be wary in case of a new failure. He managed to get the two sides together in Geneva in April but had no success in moving the process forward.

“However, it is clear that in view British insistence, he will take the next step, having as his last option the issuance of his own statement, which will largely betray the fact that expectations will be low,” said the report.

“He will call for the resumption of talks, knowing that conditions are not conducive to such a development at this time. Mainly with what is happening on the ground from the Turkish side and its insistence on a two-state solution”.

Guterres is expected to have separate meetings with President Nicos Anastasiades and Turkish Cypriot leader Ersin Tatar on the sidelines of the General Assembly. By then he will have more information to hand following Lute’s visit to the region, which is expected at the end of this month or early September.
The president is expected to travel to the US in the last week of September.