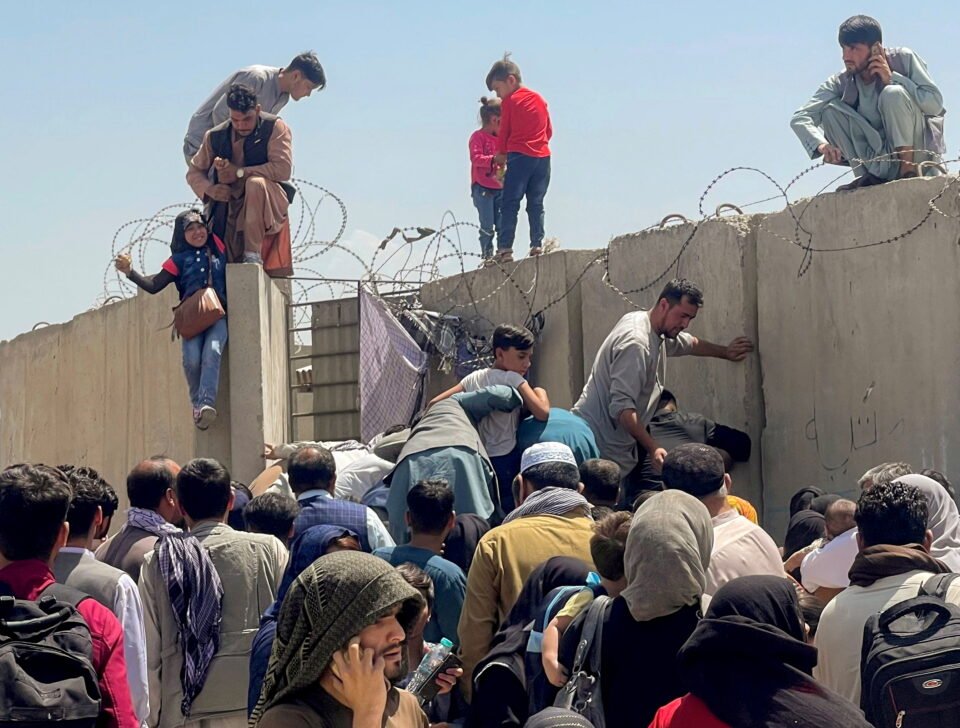 A man pulls a girl to get inside Hamid Karzai International Airport in Kabul, Afghanistan

The U.N. Security Council on Monday called for talks to create a new government in Afghanistan and an end to fighting and abuse after U.N. chief Antonio Guterres warned of “chilling” curbs on human rights and mounting violations against women and girls.

The 15-member council issued a statement, agreed by consensus, after Guterres appealed to the body to “use all tools at its disposal” to suppress a global terrorist threat from Afghanistan and guarantee respect for human rights.

“We cannot and must not abandon the people of Afghanistan,” Guterres told the Security Council.

The Taliban entered https://www.reuters.com/world/asia-pacific/talibans-rapid-advance-across-afghanistan-2021-08-10 the capital Kabul on Sunday and President Ashraf Ghani left Afghanistan, the culmination of a rapid offensive by the Islamist militants to take back the country 20 years after they were ousted by a U.S.-led invasion.

The return to Taliban rule came as U.S. and other foreign forces were leaving the country after two decades.

The Security Council stressed the importance of combating terrorism in Afghanistan to ensure other countries were not threatened or attacked, and said “that neither the Taliban nor any other Afghan group or individual should support terrorists operating on the territory of any other country.”

It called for an immediate cessation of all hostilities and the establishment, through inclusive negotiations, of a new government that should include women.

U.S.-backed Afghan forces toppled the Taliban from power in 2001 for refusing to hand over al Qaeda leader Osama bin Laden after the Sept. 11, 2001, attacks on the United States.

Independent U.N. experts reported to the Security Council last month that al Qaeda is present in at least 15 Afghan provinces, consisting mainly of Afghan and Pakistani nationals, but also people from Bangladesh, India and Myanmar.

“Afghanistan must never again become a haven for terrorists. This is the bottom line,” China’s deputy U.N. Ambassador Geng Shuang told the council. “We hope that the Taliban… make a clean break with the terrorist organizations.”

“Currently we believe that there is no point in panicking… a widespread bloodbath amongst civilians has been avoided. We urge all Afghan parties to refrain from hostilities and to foster a settlement peacefully,” he said.

The Taliban ruled Afghanistan between 1996 and 2001. They did not allow women to work, girls were not allowed to attend school, and women had to cover their faces and be accompanied by a male relative if they wanted to venture out of their homes.

“We are receiving chilling reports of severe restrictions on human rights throughout the country. I am particularly concerned by accounts of mounting human rights violations against the women and girls of Afghanistan,” Guterres said.

Ireland’s U.N. Ambassador Geraldine Byrne Nason called on the Security Council to stand with the women of Afghanistan amid “multiple and credible reports of summary executions, forced marriage and of sexual and gender-based violence.”

“The Taliban have reportedly said that women have nothing to fear from them,” she told the council. “Telling the international community what it wants to hear will fool no one. We will not turn a blind eye to the truth.”

U.S. Ambassador to the United Nations Linda Thomas-Greenfield called for a stop to attacks on civilians and respect for human rights and freedoms.

Afghanistan’s U.N. ambassador Ghulam Isaczai, speaking for millions of people “whose fate hangs in the balance,” called on the United Nations not to recognize any administration that achieves power by force or any government that is not inclusive.

“The United Nations presence will adapt to the security situation. But above all, we will stay and deliver in support of the Afghan people in their hour of need,” Guterres said.