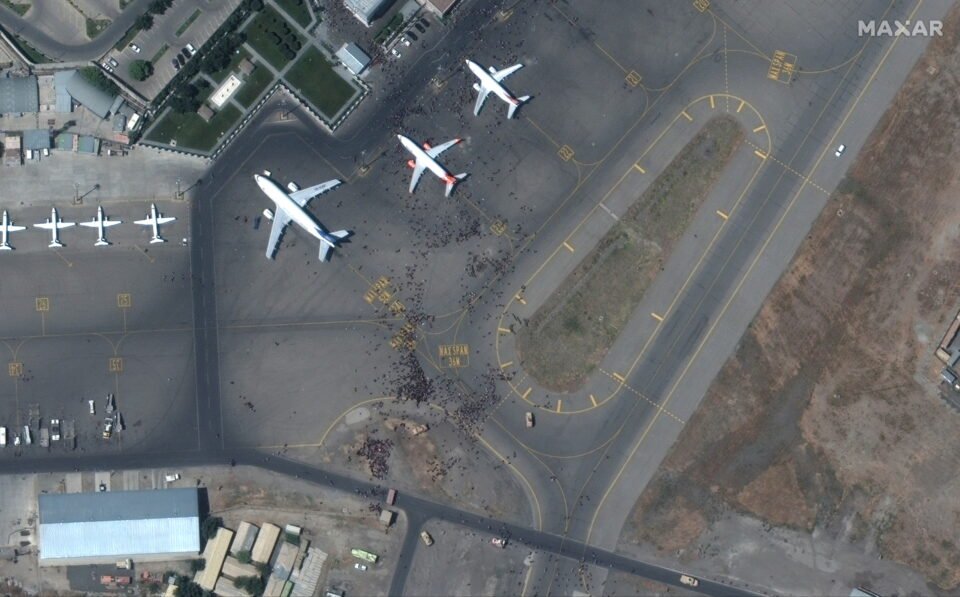 Crowds of people are seen on the tarmac at Kabul's airport in Afghanistan August 16, 2021. SATELLITE IMAGE 2021 MAXAR TECHNOLOGIES

Images of throngs trying to flee Kabul are shameful for Western nations, Germany’s president said on Tuesday, as desperate people clamoured at the airport after the Taliban takeover.

“We are experiencing a human tragedy for which we share responsibility,” said President Frank-Walter Steinmeier after the Western-backed government in Kabul collapsed and its foreign-trained security forces melted away.

Germany, which had the second largest military contingent in Afghanistan after the United States, wants to airlift thousands of German-Afghan dual nationals as well as rights activists, lawyers and people who worked with foreign forces.

“The images of despair at Kabul airport shame the political West,” Steinmeier, whose post is largely ceremonial, said in a statement at the German presidential palace Schloss Bellevue.

“All the more now we have to stand by those to whom we are indebted for their work and support.”

However, a first German military plane  to land in Kabul since the Taliban took power evacuated only seven people due to the airport chaos after flying soldiers in on Monday. However a second evacuation flight landed at Kabul airport shortly before noon, German Defence Minister Annegret Kramp-Karrenbauer said.

Germany is deploying 600 soldiers for that purpose.

Bild newspaper said a German military Airbus A400M had taken off from Tashkent and was to land in Kabul early afternoon.

Chancellor Angela Merkel has warned that Afghans fleeing to neighbouring countries could make their way to Europe, in a repeat of the 2015 migrant crisis, if they do not receive sufficient humanitarian assistance.

Germany opened its borders six years ago to more than 1 million migrants, many of them Syrians, fleeing war and poverty: a move that won Merkel plaudits abroad but which eroded her political capital at home.

She plans to stand down after a Sept. 26 federal election.

“The lesson of the last 20 years is that the goal of regime change, to intervene militarily to end a dictatorship in order to build a democracy, has almost universally failed,” he said in Rostock in northern Germany.

Big plans for reclamation of old refineries area in Larnaca