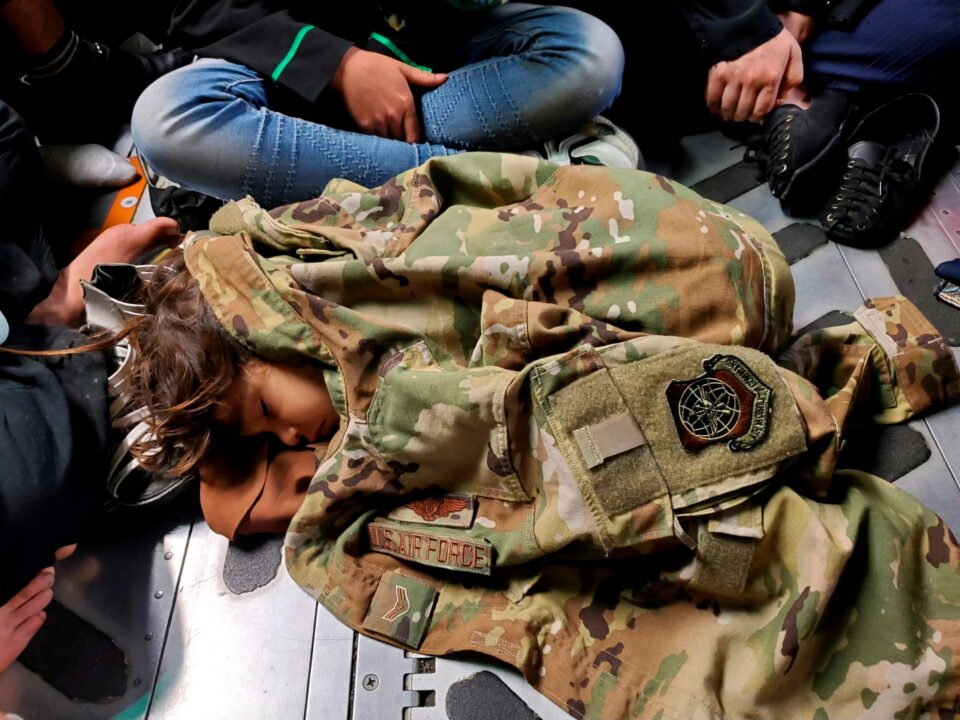 An Afghan child kept warm by the uniform of Airman First Class Nicolas Baron, C-17 loadmaster, during an evacuation flight from Kabul Mark Lawson/Handout via REUTERS

More than 18,000 people have been flown out of Kabul since the Taliban took over Afghanistan‘s capital, a NATO official said on Friday, pledging to redouble evacuation efforts as criticism of the West’s handling of the crisis mounted.

Thousands of people, desperate to flee the country, continued to throng the airport, the official who declined to be identified told Reuters.

The speed with which the Taliban conquered Afghanistan as US and other foreign troops withdrew surprised even their own leaders and has left power vacuums in many places.

The Taliban urged unity ahead of Friday prayers, the first since they seized power, calling on imams to persuade people not to leave Afghanistan amid chaotic scenes at the airport, protests and reports of violence.

A witness told Reuters several people were killed in the eastern city of Asadabad on Thursday when Taliban militants fired on a crowd demonstrating their allegiance to the vanquished Afghan republic, as the Taliban set about establishing an emirate, governed by strict Islamic laws.

There were similar shows of defiance in two other cities – Jalalabad and Khost – in the east, as Afghans used celebrations of the nation’s 1919 independence from British control to vent their anger with the Taliban takeover.

Another witness reported gunshots near a rally in Kabul, but they appeared to be Taliban firing into the air.

A Taliban spokesman was not immediately available for comment.

Kabul has been largely calm, except in and around the airport  where 12 people have been killed since Sunday, NATO and Taliban officials said.

White House national security adviser Jake Sullivan said in an interview with NBC News that the United States is “laser-focused” on “the potential for a terrorist attack” by a group such as Islamic State amid the evacuation.

Criticism of NATO and other Western powers has mounted as images of the chaos and desperation are shared around the world.

In one scene captured on social media, a small girl was hoisted over the airport’s perimeter wall and handed to a U.S. soldier.

U.S. President Joe Biden is set to speak about the evacuation efforts at 1 p.m. (1700 GMT) on Friday, having faced a torrent of criticism for his handling of the troop withdrawal, negotiated by the previous U.S. administration.

British media reported the country’s spy chiefs may face a grilling over intelligence failings. Several British civil servants remained on holiday as the Afghan debacle erupted, and Foreign Minister Dominic Raab has been heavily criticised for his initial response to the unfolding crisis.

The governments of Germany and Australia have also faced calls to do more and speed up the evacuation of citizens and vulnerable Afghans.

On Thursday, G7 foreign ministers called for a united international response to prevent the crisis from worsening, in comments echoed by countries including Russia.

China said the world should support, not pressure, Afghanistan.

A Taliban spokesman told Chinese state media that China has played a constructive role in promoting peace and reconciliation in Afghanistan and is welcome to contribute to the rebuilding of the country.

Since seizing Kabul on Sunday, the Taliban have presented a more moderate face, saying they want peace , will not take revenge against old enemies and will respect the rights of women within the framework of Islamic law.

A report by a Norwegian intelligence group said the Taliban had begun rounding up Afghans on a blacklist  of people linked to Afghanistan‘s previous administration or U.S.-led forces that supported it. Complaints by some Afghan journalists have cast doubt on assurances that independent media would be allowed.

Amnesty International said  an investigation found the Taliban had murdered nine ethnic Hazara men after taking control of Ghazni province last month, raising fears that the Taliban, whose members are Sunni Muslims will target Hazaras, who mostly belong to the Shi’ite minority.

A Taliban spokesman was not immediately available for comment on the reports.

A U.S. lawmaker said the Taliban were using files from Afghanistan‘s intelligence agency to identify Afghans who worked for the United States.

“They are methodically ramping up efforts to round those folks up,” said Representative Jason Crow, who has been leading efforts in the U.S. Congress to accelerate the evacuation of American-affiliated Afghans.