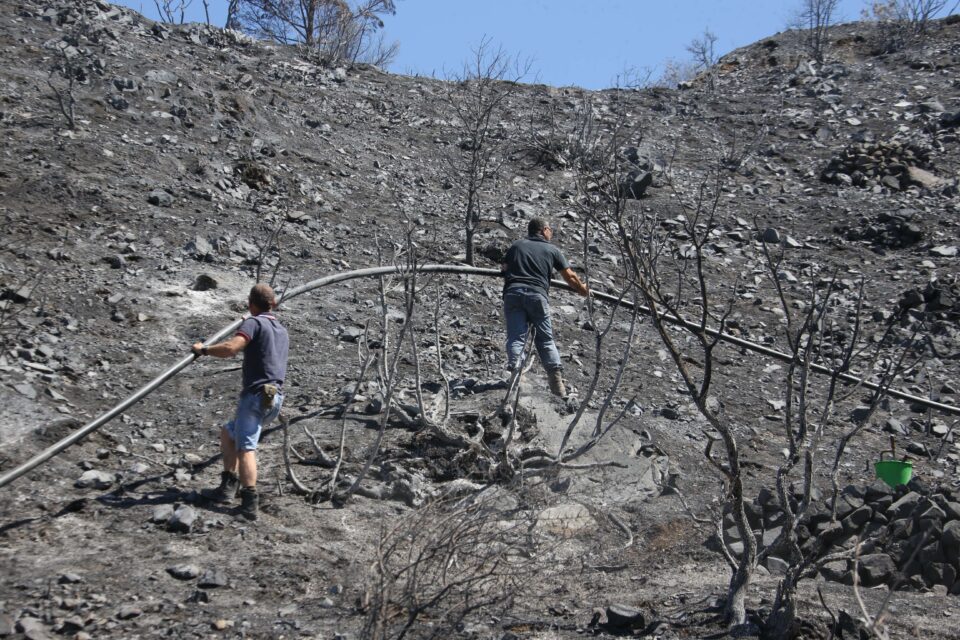 The catastrophic fires on July 3 and 4 killed four people and destroyed properties, crops, and forest

The team of Greek experts sent to survey areas affected by huge fires in early July have finalised an action plan for what needs to be done to avoid flooding and soil erosion during winter and have submitted their suggestions to the agriculture ministry.

The catastrophic fires on July 3 and 4 killed four people and destroyed properties, crops, and forest, affecting a total area of about 55 square kilometres in the mountainous areas of Larnaca and Limassol.

The team, which comprises of experts in the fields of geology and land conservation, was invited by the agriculture ministry in late July to survey the area in order to determine solutions that could keep further disasters at bay.

At the time, professor of Dynamic Tectonic Applied Geology and Disaster Management at the National Kapodistrian University of Athens Efthymios Lekkas, who headed the team of experts, said the aim was to help, using the experience they have from catastrophic fires at an international level and the destructive phenomena that follow them.

The report details a series of suggestions that include construction that will help prevent flooding, landslides and erosion, as well as measures to conserve and protect groundwater sources.

The first project suggested was the construction of anti-flooding and anti-landslide structures like gabions, whose role will be to stabilise slopes, and gutters to help with water drainage. Loose rock fragments are also to be removed to eliminate fallout, the report said.

These are based on the success of previous projects that were carried out in areas with similar geological structures in Greece after fires in the Peloponnese in 2007, Laconia in 2015, Chios in 2016 and Cythera in 2017.

The experts also mapped out 66 key points in the drainage network through which water would run off in the case of a storm, chosen for their size and shape, as well as the basins they form.

They suggested that multiple flow-through dams are built as opposed to just one, explaining that this intervention will prove significant in the long-run, since the effectiveness of these structures teds to wane with time.

Therefore, having multiple dams in key locations, no further than 20 metres from each other, will allow for failing ones to be fixed while others continue to work.

In addition, the affected areas’ landslide susceptibility was evaluated using data from the European Landslide Susceptibility Map, which helped them identify issues in the northern, eastern, and western parts of the areas.

These sections are characterised by steep slopes, which are attributed to active tectonic structures and intense erosion processes. The landslide susceptibility in these areas, which include parts of the road network, ranges from medium to very high.

At the same time, there were areas with minimal landslide susceptibility, found around Arakapas and Eptagonia in the south, close to Ora in the east, and Melini in the north.

Lastly, the experts deemed projects already underway by the water development board as satisfactory. These include the restoration and reconstruction of traditional dry stone walling found in these areas, which were built to control erosion and keep farming terraces in place.

The cabinet is expected to discuss the issue of fires on Monday at its meeting in Troodos.

US urges Americans to keep clear of airport as chaos grows