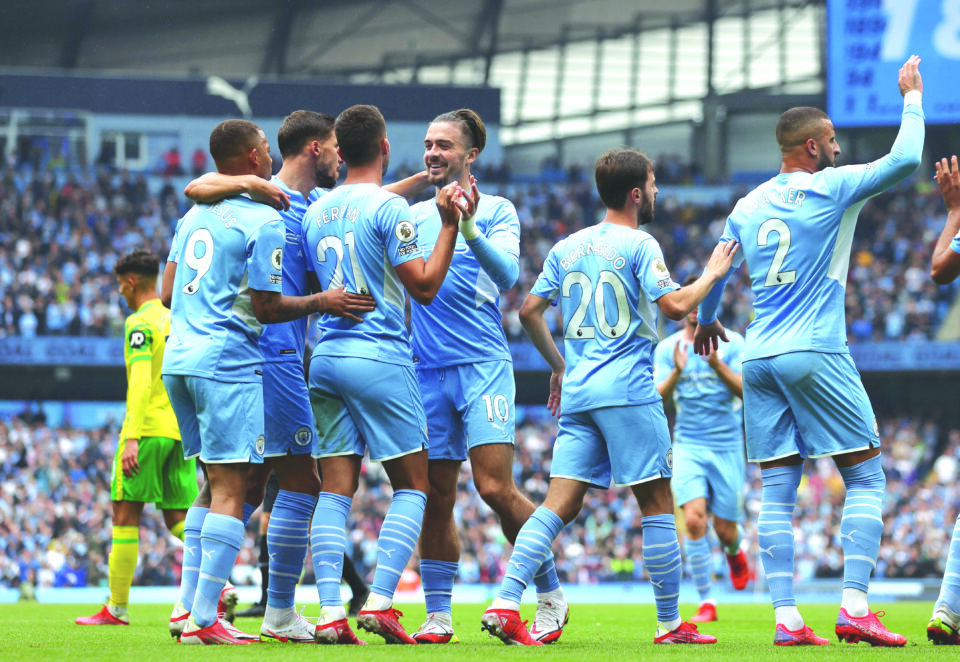 Grealish bundled in a low cross by Gabriel Jesus in the 20th minute to double City‘s lead after they had taken the lead in the sixth minute with a Tim Krul own goal.

Beaten in their opening game at Tottenham Hotspur last weekend, City looked far sharper and swarmed all over a lightweight Norwich. They also had a Ferran Torres goal ruled out inside the opening 20 minutes.

Norwich, who lost 3-0 to Liverpool on the opening day, avoided any further damage until midway through the second half when Aymeric Laporte fired in from close range.

City then turned the screw with Raheem Sterling and Riyad Mahrez both getting on the scoresheet with well-worked goals.

A brilliant volley by Danny Ings and an Anwar El Ghazi penalty gave Aston Villa an easy 2-0 victory over a poor Newcastle United side in the Birmingham club’s first home game of the Premier League season on Saturday.

Newcastle striker Callum Wilson wasted a good early chance before Ings put Villa in front just before the break, throwing himself in the air and volleying home a flick-on from a long throw in first-half stoppage time.

Things went from bad to worse for the visitors in the second half when defender Jamaal Lascelles was penalised after a goal-bound header from Tyrone Mings hit him on the arm, and El Ghazi confidently fired home the resulting penalty in the 62nd minute.

Newcastle thought they were back in it when Wilson was cleaned out in the box by Villa keeper Emiliano Martinez, but the referee’s decision to award a penalty was overturned after the Newcastle striker was found to have been offside when the ball was played forward.

Newcastle failed to find the spark that might have ignited a comeback, slumping to their second defeat of the season following their 4-2 opening day loss to West Ham United, leaving them second from bottom of the standings.

Ings has now scored twice in two league games for Villa since arriving from Southampton in the summer, putting the Birmingham side in eighth spot in the table.

LEEDS DRAW 2-2 AT HOME AGAINST EVERTON

Leeds United winger Raphinha blasted in a second-half equaliser as the battling Yorkshire side came back twice to secure a 2-2 draw with Everton in the Premier League on Saturday for their first point of the season.

Raphinha, who was called up to the Brazilian squad for the first time last week, lashed one past goalkeeper Jordan Pickford in the 72nd minute after Everton winger Demarai Gray thought he had sealed a second straight win for the visitors.

Gray, who joined Rafa Benitez’s side from Bundesliga outfit Bayer Leverkusen in July, rifled the ball past goalkeeper Illan Meslier from a tight angle inside the box to make it 2-1 in the 50th minute of a physical contest.

Everton went up 1-0 against the run of play through Dominic Calvert-Lewin’s 30th-minute penalty, following a Video Assistant Referee check after the on-field official did not spot Leeds skipper Liam Cooper’s tug on the striker’s shirt.

The goal silenced a raucous Elland Road, where a full house was attending a top-flight match for the first time in 17 years, but the home fans found their voices again as Mateusz Klich ran on to Patrick Bamford’s fine pass to equalise before the break.

Everton, who won their opener 3-1 against Southampton at home, visit Brighton & Hove Albion in the league next Saturday while Marcelo Bielsa’s Leeds could face a tricky challenge at winless Burnley a day later.