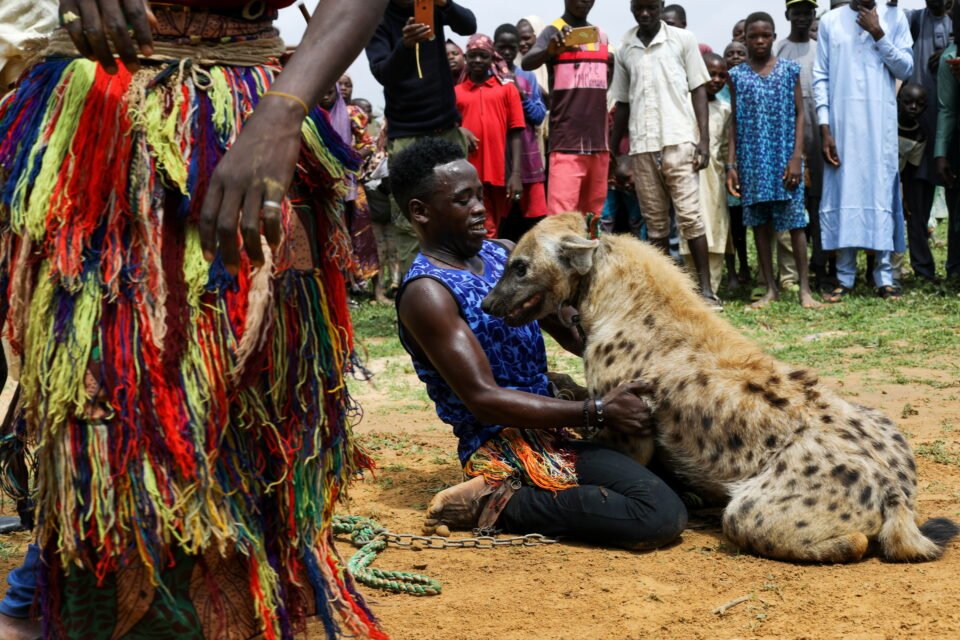 Abdullahi Jahun, 24, pulls a hyena on top of himself during a circus in Gabasawa, Kano State, Nigeria,

By Nneka Chile and Seun Sanni

A hyena may not be your average house pet, but in northern Nigeria some men keep the creatures in their homes, display them at festivals and even use their dung or saliva to make remedies.

Abdullahi Jahun comes from a line of hyena men, as they are called. He learnt how to tame and handle a hyena from his father, and now makes a living from touring around northern Nigeria to entertain crowds with his own animal.

“This was my job from when I started walking as a child,” said Jahun during an appearance in the city of Kano. “I used to see my elders do it and became enthusiastic about it.”

Jahun says he captured his hyena two years ago and has taken it to events such as festivals, coronations of traditional rulers, and durbars, a type of parade where horsemen in colourful costumes show off their skills to honour a local emir.

Jahun and his hyena usually appear alongside other street performers such as snake charmers, drummers and dancers.

He allows children to sit on its back, and sometimes he carries a child on his own shoulders and the hyena around his hips at the same time.

Hyenas are often viewed as repulsive and sinister, partly due to their scavenging habits in the wild, but traditional leader Nasiru Wada says hyena men have been part of popular culture in northern Nigeria for many generations.

“It used to be really prolific but not anymore,” he said, adding that hyenas are harder to come by than in the past due to shrinking habitats. “What we have seen now is a dying art.”

Wada acknowledged that the ways of the hyena men may not chime with modern ideas about the treatment of animals, and conservationists have raised questions about how they are captured and kept.

But Yaya Kawu, a farmer, hunter and traditional healer, who lives with a hyena and several snakes in a rural town in Kano State, says his animals are considered part of normal life in his community.

His mud brick compound regularly attracts gaggles of children eager to look at the animals, and neighbours who have just slaughtered a goat sometimes offer him a gift of meat for his hyena.

Kawu sells remedies made from hyena dung, saliva or hair, which he says can help with a range of ailments — even bad behaviour by teenagers.

“Some young people, they get into drugs, alcohol. The parents come to me and I give them a remedy so that everything will be all right,” he said.