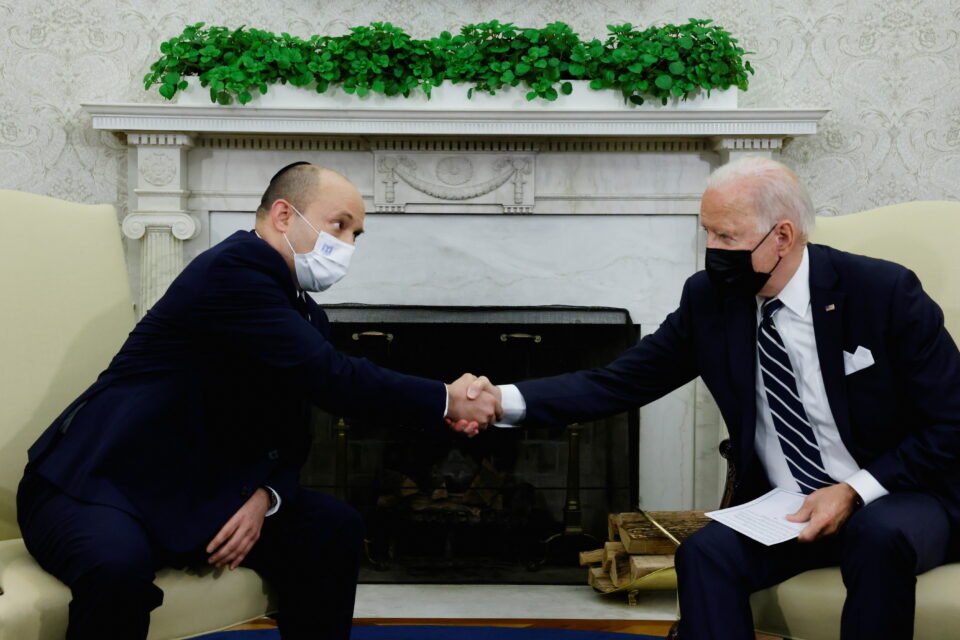 U.S. President Joe Biden told Israeli Prime Minister Naftali Bennett in White House talks on Friday that he was putting “diplomacy first” to try to rein in Iran’s nuclear program but if negotiations fail he would be prepared to turn to other unspecified options.

After a one-day delay due to a deadly suicide bombing in Kabul during the chaotic U.S. evacuation from Afghanistan, Biden and Bennett held their first meeting seeking to reset U.S.-Israeli relations and narrow differences over how to deal with Iran’s nuclear developments.

Tensions complicated relations between Bennett’s predecessor, Benjamin Netanyahu, who was close to former President Donald Trump, and the last Democratic administration led by Barack Obama with Biden as his vice president.

But the meeting, the first since Biden and Bennett took office this year, was eclipsed by Thursday’s attack outside Kabul airport that killed at least 92 people, including 13 U.S. service members, confronting Biden with the worst crisis of his young presidency.

“The mission there … is dangerous and now it’s come with a significant loss of American personnel, but it’s a worthy mission,” Biden told reporters after his one-on-one talks with Bennett.

In brief remarks before reporters were ushered out of the Oval Office, both leaders touched on Iran, one of the thorniest issues between the Biden administration and Israel, but mostly they papered over their disagreements.

Biden said he and Bennett discussed “the threat from Iran and our commitment to ensure Iran never develops a nuclear weapon.”

“We’re putting diplomacy first and we’ll see where that takes us. But if diplomacy fails, we’re ready to turn to other options,” Biden added, without offering specifics.

Bennett, a far-right politician who ended Netanyahu’s 12-year run as prime minister in June, was expected to press Biden to harden his approach to Iran and back out of negotiations aimed at reviving an international nuclear deal with Tehran that Trump abandoned.

U.S.-Iran negotiations have stalled as Washington awaits the next move by Iran’s new hardline president.

“I was happy to hear your clear words that Iran will never be able to acquire a nuclear weapon,” Bennett told Biden. “You emphasized that you’ll try the diplomatic route but there’s other options if that doesn’t work out,” he added, also stopping short of identifying the possibilities.

MOVING ON FROM NETANYAHU

Bennett has sought to move on from Netanyahu’s combative public style and instead manage disagreements behind closed doors between Washington and its closest Middle East ally.

But he has been just as adamant as Netanyahu was in pledging to do whatever is necessary to prevent Iran, which Israel views as an existential threat, from building a nuclear weapon. Iran consistently denies it is seeking a bomb.

Bennett told reporters at the White House that Israel has developed a “comprehensive strategy” to keep Iran away from nuclear breakout and stop its “regional aggression.”

Alluding to Israel’s threats of military action and the billions of dollars in U.S. military aid it receives, Bennett said: “We will never outsource our security. It’s our responsibility to take care of our fate, but we do thank you for the tools … you’ve been giving us.”

The visit gave Biden an opportunity to demonstrate business as usual with a key partner while grappling with the aftermath of the Afghan attack. His handling of the wrapping-up of the U.S. military presence there after 20 years of war has not only hurt his approval ratings at home but also raised questions about his credibility among both friends and foes abroad.

On the Israeli-Palestinian conflict, Biden and Bennett remain far apart. Biden has renewed backing for a two-state solution after Trump distanced himself from that longstanding tenet of U.S. policy. Bennett opposes Palestinian statehood.

Biden made a brief reference to the issue, saying he wanted to discuss “ways to advance peace and security and prosperity for Israelis and Palestinians.”

Bennett did not mention the Palestinians in his remarks.

The consensus among Biden’s aides is that now is not the time to push for a resumption of long-dormant peace talks or major Israeli concessions, which could destabilize Bennett’s ideologically diverse coalition.

But Biden’s aides have not ruled out asking Bennett for modest gestures to help avoid a recurrence of the fierce Israel-Hamas fighting in the Gaza Strip that caught the new U.S. administration flat-footed earlier this year.

The U.S. administration has also emphasized that it opposes further expansion of Jewish settlements on occupied land.

Bennett, 49, the son of American immigrants to Israel, has been a vocal proponent of settlement building.

The delay in the White House meeting means that Bennett, an Orthodox Jew who does not travel on the Sabbath, will remain in Washington until after sundown on Saturday.