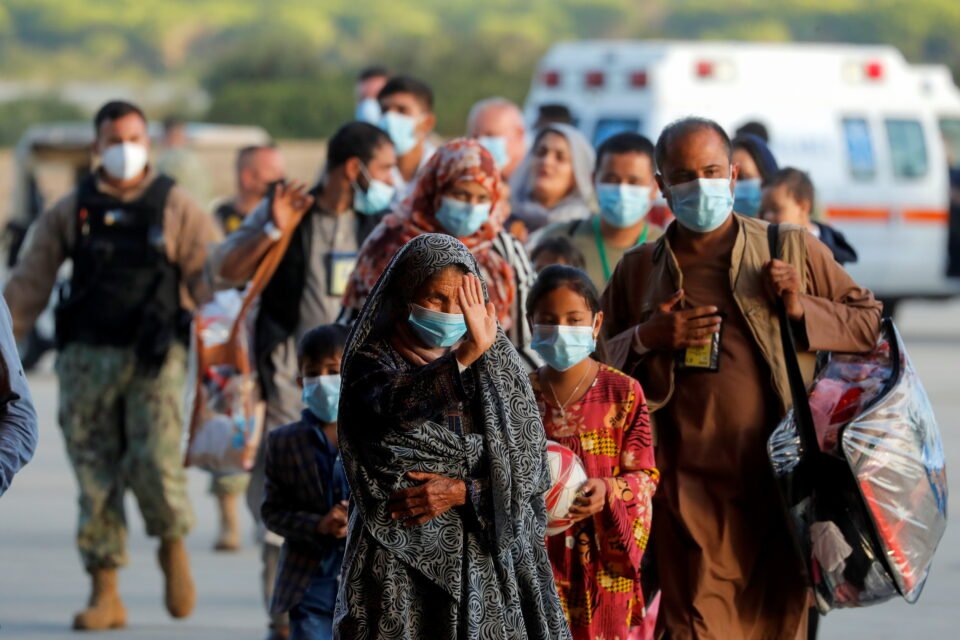 Afghan citizens, who have been evacuated from Kabul, arrive at Naval Station (NAVSTA) Rota Air Base in Rota, southern Spain,

European Union countries on Tuesday proposed to step up aid to Afghanistan and its neighbours but could not agree a common policy on accepting asylum-seekers fleeing Taliban rule.

Western nations involved in the fight against the Taliban have already evacuated 100,000 people who supported them, and should take them in, along with others who failed to get onto the last evacuation flights. Chancellor Angela Merkel said this group included up to 40,000 people with the right to German residency.

The issue dividing EU countries is whether asylum should now be extended by the bloc as a whole to other groups considered likely to suffer under the Taliban’s application of strict sharia, or Islamic law.

For many, the crisis evokes 2015, when more than a million people from Syria and other countries reached the EU, to be met with indignation from some member state, who rejected appeals to take in a some asylum-seekers in a gesture of EU solidarity.

European Home Affairs Commissioner Ylva Johansson said the bloc should take in Afghan women, children, judges, journalists and human rights activists who were vulnerable to the Taliban after 20 years of greater rights and freedoms.

German Interior Minister Horst Seehofer, whose country took in the bulk of the new arrivals since 2015, said all member countries should play their part.

Denmark, the Czech Republic and Austria said this was out of the question.

“Stay there – and we will support the region to help the people there,” Austrian Interior Minister Karl Nehammer told those hoping to reach Europe.

The EU has half a billion people, and needs immigrants to sustain its ageing population as birth rates decline.

But the irregular arrivals of 2015-16 stretched social and security systems, fed anti-immigrant sentiment and triggered feuds between member countries on how to provide for them.

Hawks including Poland and Hungary reject Muslim refugees as a threat to their historically Christian culture, and the issue of immigration became highly political.

Since 2016, the bloc has fortified its external borders and increased assistance to countries including Turkey, Lebanon, Libya and Tunisia in a bid to keep migrants away.

Although only 95,000 people made it across the Mediterranean onto EU shores last year, according to the UN Refugee Agency, UNHCR, the issue remains a divisive one in the bloc.

A draft joint statement from the ministers seen by Reuters said that “incentives to illegal migration should be avoided”.

It indicated the bloc would pledge to step up humanitarian aid to Afghanistan, including via the UNHCR, but gave no specifics.

The 2.2 billion euros earmarked for development aid in Afghanistan over the next few years have, however, been suspended since the Taliban took over.

The EU hosts a 10th of the world’s refugees, equivalent to about 0.6% of the bloc’s total population.

Last year, 42,000 Afghans won legal protection in the EU. Afghans amounted to just over a 10th of first-time asylum applications in the bloc, the second group after Syrians, and made up 8% of irregular entries, according to European Commission data.