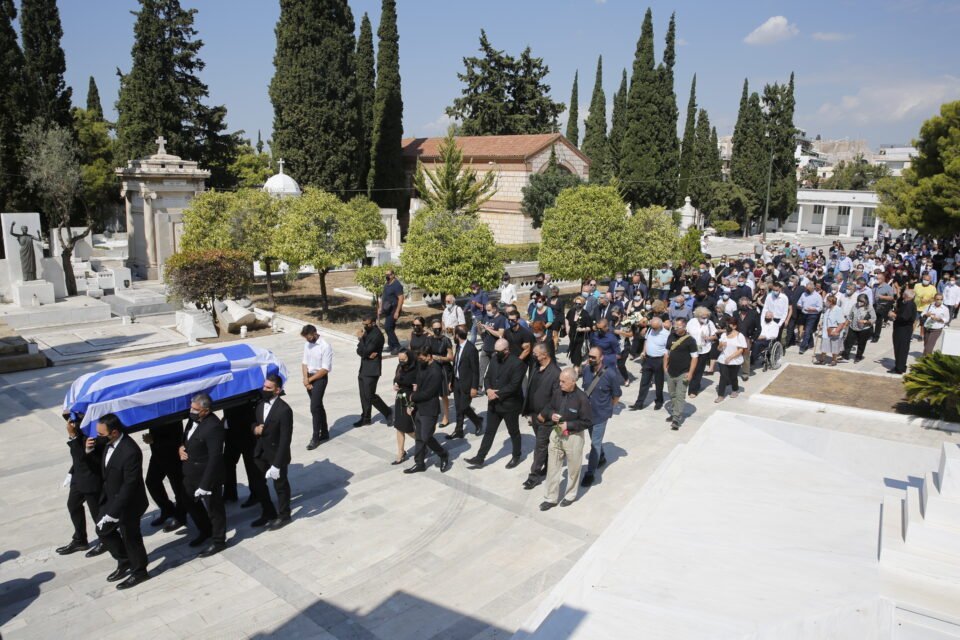 The funeral of Akis Tsohatzopoulos

On August 27, Akis Tzohatzopoulos passed away, at the age of 82. He was the second in command of the Panhellenic Socialist Movement (Pasok), under the leadership of Andreas Papandreou, who he met in Frankfurt, in 1970, at which stage he became a member of the anti-dictatorial Panhellenic Liberation Movement (Pak). In 1968 he was not allowed to enter Greece as the junta had stripped him of his Greek citizenship because of his involvement in the resistance to the dictatorship. In 1975 he returned to Greece on a permanent basis. He was one of the key members of the team that sought to bring “change” to Greece. A founding member of Pasok and a member of the Executive Committee of the party since 1974, he served as a member of all the governments formed by Andreas Papandreou from 1981 onwards, when Pasok first came to power. He was a key member of the “centre-left” party (as Pasok wished to be referred to) with an uninterrupted presence in ministerial positions in the Pasok governments from 1981 to 2004. The late Harry Klyn is remembered to have said that on every anniversary of his birthday, Tzohatzopoulos sent a congratulatory telegram to his mother!

However, on June 27, 2010 his party membership was suspended by Pasok’s Transparency Committee because his explanations concerning the source of his wealth and his relationship with certain offshore companies were deemed to be inadequate.

On April 11, 2012 he was arrested on charges of money laundering and tax evasion and on March 8, 2013 he was sentenced to eight years imprisonment, a fine of €520,000 and the confiscation of a piece of property in Dionysiou Areopagitou Street (opposite the Acropolis) for filing an incomplete and inaccurate statement of wealth. On appeal, he was again convicted (in April 2014) by the five-member Criminal Court of Appeal but the term of his imprisonment was shortened and the fine imposed on him was lowered while the confiscation of his property near the Acropolis was confirmed.

On October 7, 2013 the three-member Criminal Court of Appeal sentenced him to 20 years imprisonment for the collection of illegal fees (bribes) associated with military armament contracts. The court also found him guilty of “systematic” money laundering and of bribery, while, on October 30, 2017 the five-member Criminal Court of Appeal reduced the term of his imprisonment by one year (to 19 years) and ordered the freezing of his assets for the compensation awarded to the Greek state amounting to €1 million.

In June 2018 he was released from prison on health grounds and he died on August 27. The funeral of Akis Tzohatzopoulos took place at the First Cemetery of Athens on August 31. One could not fail to notice that his coffin was covered with the Greek flag.

What are the lessons that can be learned from this story?

The first and most important lesson is that power corrupts. That is why it is absolutely essential that the political system should have safety valves in place to protect it from corrupt politicians. Proactively preventing and appropriately punishing corruption and collusion is of critical importance to the wellbeing of society. It goes without saying that the thrust of the effort should be on preventing such evil acts, rather than on retroactively punishing them.

It is natural and should be anticipated that corrupt politicians would seek to neutralise the safety valves that may exist or to prevent – at all costs – their introduction into the country’s political system, thus ensuring that the risk of exposing their evil acts is minimised. Naturally, these efforts are made in a disguised, covered manner.

It has been proven empirically that the wealth statements of politically exposed persons constitute a powerful tool for the identification and punishment of corruption and collusion. Regrettably, the Cyprus system of wealth statements has been castrated and remains ineffective. Various attempts to restructure the system and render it effective have come up against strong resistance on the part of the executive as well as the legislative and the judicial arms of the state. On the basis of various pretextual excuses, they have succeeded in preserving a totally “toothless” system.

As demonstrated in the case of Tsohatzopoulos, the proper functioning of the judicial system is a very important safeguard against corruption and collusion. From time to time the independence and the effectiveness of the Cypriot judicial system has been called into question, as a result of the long delays experienced in securing a final judgement, in the cases that end up in the courts. In addition, in certain cases, doubts were expressed as to the correctness of the judgements passed in specific important cases on the grounds that the personal interests of the judges involved could have influenced their verdict. The introvert features of the Cypriot judicial system and the absolute insistence of the judges to maintain their self-regulation status have inevitably reinforced these concerns. The judges’ counter argument is that the involvement of other arms of the state in the resolution of the problems confronting the judicial system is likely to exacerbate (rather than alleviate) these problems. The counter-argument to the judges’ argument is that there is also the option of an independent authority, which would be jointly appointed by the three arms of the state (executive, legislative and judicial) for a relatively short period of three to four years, which can be renewed only once.

The responsibility of the electorate

Of course, in the final analysis, the responsibility for the enduring large-scale corruption and collusion in Cyprus falls on the shoulders of the electorate, which, if truly committed to combat corruption, must demand from the candidates seeking their election to political posts, specific pre-election commitments and concrete proposals instead of the general and vague promises that are generously given at the pre-election stage and are quickly forgotten right after the elections. Admittedly, the possibility exists that the electorate finds the prevailing disorderly climate conducive to seeking and securing various personal benefits from the corrupt system.

As to the covering of Tsohatzopoulos’ coffin with the Greek flag, it cannot be overlooked. For me, it is what the British would describe as “adding insult to injury”. I was relieved to learn that this was an initiative of the relatives of the deceased and not the result of an official decision.