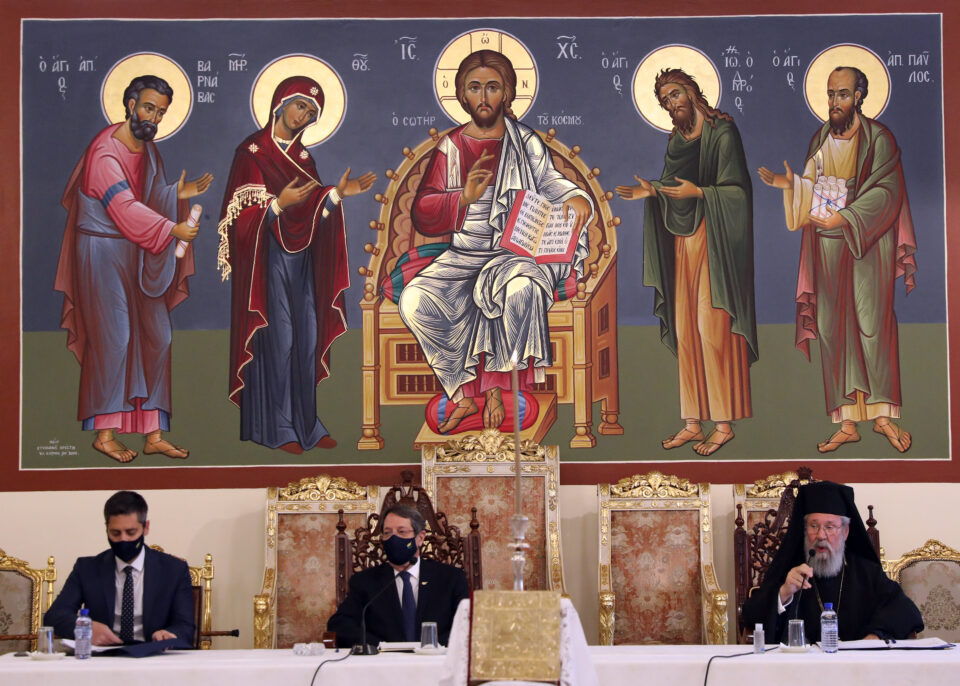 Morphou bishop to say silent on vax views ‘unless provoked’

President Nicos Anastasiades said Thursday he did not expect any public statements in the future from clerics encouraging people not to vaccinate against Covid-19, as the Church Holy Synod reaffirmed its support for inoculations as a means of fighting the pandemic.

Anastasiades attended the Holy Synod on Thursday and appealed to the clergy to help the state fight the pandemic.

“It was neither mine nor the government’s position to clash with anyone, and they can express themselves freely,” the president said. “However, because of the influence they have, I appealed, and it was understood … and I hope that we will not have any problems in the future with statements potentially encouraging people opposing vaccinations.”

Archbishop Chrysostomos said on Sunday he would suggest to the Holy Synod the punishment of clergy who urge people not to get vaccinated.

One of the most vocal opponents of vaccines and government measures to curb the spread is Morphou Bishop Neophytos who has recently recovered from the virus.

Neophytos, who refused to speak to the media on Thursday, has said he would not get the jab, because he did not want to become like a genetically modified product.

He was also accused of breaking measures against the spread of coronavirus by encouraging his congregation to attend church services when they were banned and refused to pay a fine imposed on him for his actions.

The president said he had a constructive dialogue with the synod, including Morphou.

“I think there will not be public interventions encouraging people not to vaccinate.”

In a statement, the Holy Synod said it reaffirmed its December 2020 decision to back vaccinations and “called on everybody, bishops, clergy, and laymen, to comply.”

Asked by journalists whether the attorney-general might get involved with Neophytos’ public remarks, Anastasiades said he personally went to the Holy Synod meeting “with a constructive position, and there is no question of prosecuting anyone whose views are different.

“We are speaking about voluntary, not mandatory, encouragement of vaccinations, and I am satisfied with the discussions today.”

Earlier this week, Akel MP Irini Charalambidou told a television channel that the state – specifically the attorney-general – should intervene because Neophytos’ comments “sway people into behaviours that lead to death.”

In effect, she had suggested the bishop could he held legally accountable for anyone he may have influenced into not getting vaccinated and who ended up dying.

Ultimately the Holy Synod meeting appears to have struck a middle ground.

In a statement of his own later, Neophytos said he and the other bishops “agreed with his Beatitude’s proposal that within the Holy Synod we will voice our dissent whenever we happen to disagree with a decision by the majority.

“But in public, we shall remain silent, provided that we are not provoked into responding, and we will publicly express our assent with the decisions of the majority of the Holy Synod, whenever we happen to agree.”

The bishop of Morphou also said that he personally suggested to Anastasiades that he ensure the government procure supplies of new medicines for the coronavirus, “the special monoclonal antibodies, in the hopes that this suggestion is implemented as soon as possible, so that our fellow countrymen can have access to these medicines.”

These medicines, the bishop went on to say, are already in use in the United States and European countries, with reports that their efficacy against the coronavirus can reach up to 85 or 90 per cent.

Summing up, Neophytos said that he, the archbishop as well as the president are at the service of all people – vaccinated or not.

“I would like us to be very careful not to lead people into divisiveness, separated into the vaccinated and the unvaccinated.

“As to the matter of inoculation with the vaccines available for the coronavirus, we remain steadfast in the views we expressed in public, even if we are in the minority.”

In a postscript, the bishop added: “Our speeches and sermons shall continue without reference to vaccinations.”