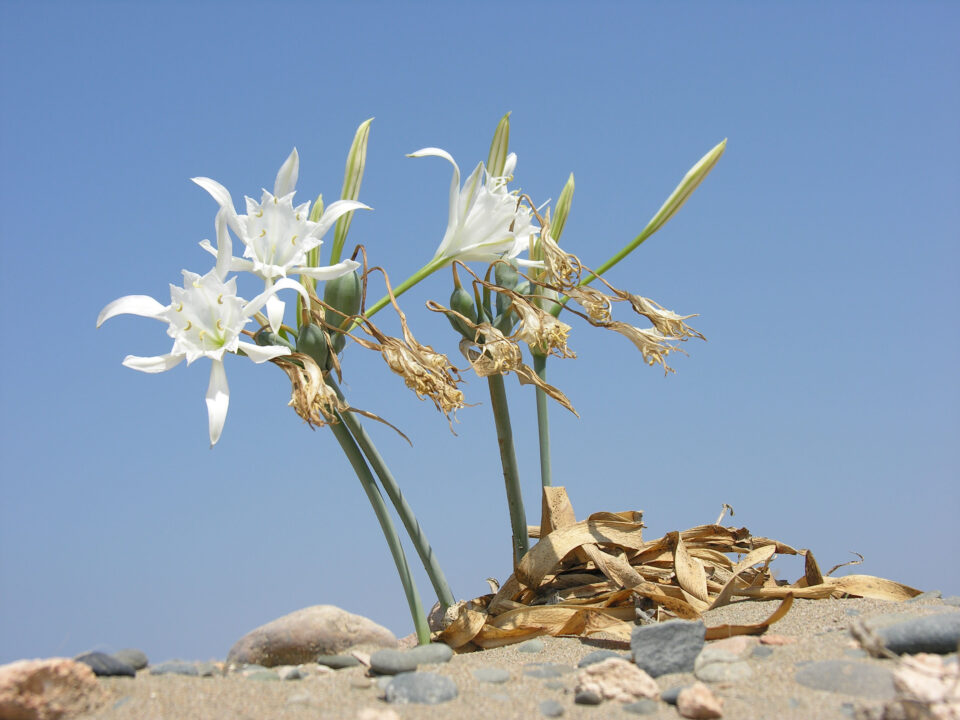 The sea daffodil (Pancratium maritimum) is September’s plant of the month, chosen by the agriculture ministry as part of its efforts to educate the public about plants endemic to the island.

According to the ministry, the plant has been known since antiquity, and has even been found in ancient illustrations in both the Minoan palace of Knossos and archaeological sites in Santorini, and referenced by ancient botanists Theophrastus and Pedanius Dioscorides.

The sea daffodil grows between seven and 30 centimetres tall, with a long neck and glaucous (with a whitish powder or waxy coating) leaves that often die back during hot summers. Its white flowers have a subtle lily scent that only becomes apparent during still, windless summer nights.

The plant flowers from August to October and can be found on several Cypriot beaches across the Akamas, the Akrotiri peninsula, Ayia Napa and Protaras, Ayios Amvrosios in Kyrenia and the Karpasia peninsula.

It is native to the Canary Islands and both sides of the Mediterranean region.

The name Pancratium comes from the Greek words ‘pan’ and ‘krataios’, which mean strong, alluding to its resilience as it flowers in dry, sandy land. Maritimum means ‘of the sea’, as it grows on beaches.

Despite its resilience, the Red Data Book of Cypriot Flora lists the sea daffodil as a near-threatened species, as the habitat and the population of the plant are under great pressure due to intense human activity in coastal areas. Luckily, large concentrations of the plant grow within protected areas which are part of the Natura network.

The genus Pancratium comprises about 15 species and subspecies found across Mediterranean Europe, North Africa and tropical regions of Asia. In Cyprus it is represented by pancratium maritimum, which is considered part of the Amaryllis (Amaryllidaceae) family alongside over 1,600 plant varieties across the world.

Only 30 per cent trust government to properly use EU funds

Anastasiades to head to Bahrain on Monday