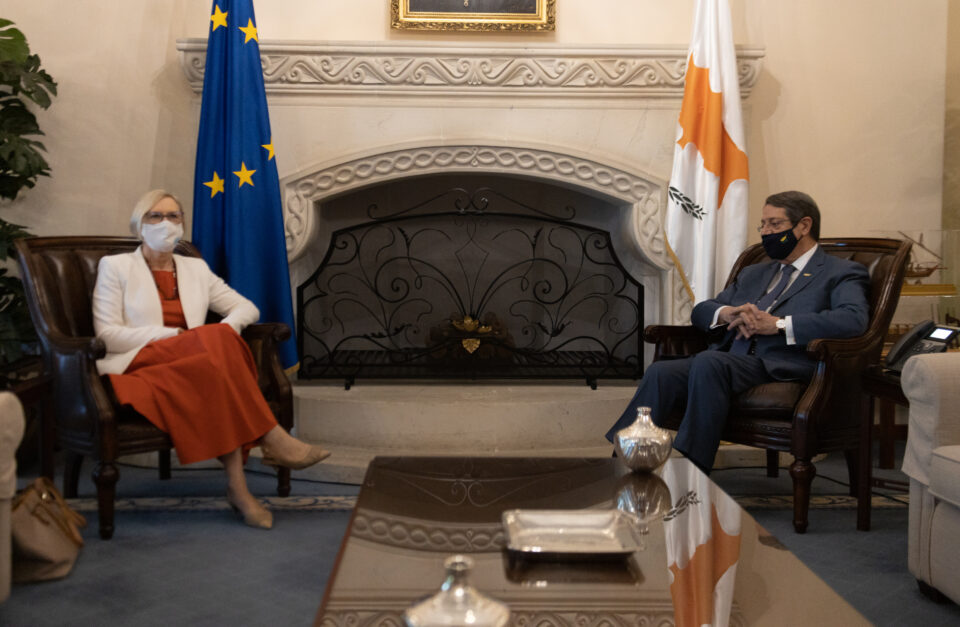 Spehar with Anastasiades at the Presidential palace on Friday

UN special representative and head of Unficyp Elizabeth Spehar said she still has hope there will be a solution to the Cyprus problem after her farewell meeting with President Nicos Anastasiadis on Friday.

The meeting lasted a little over an hour at the presidential palace, where the Canadian diplomat thanked the president for their cooperation during her five years in Cyprus.

“Cypriots want a better future for this island. It is very important to get more people involved in the peace process,” she said.

She also said that the UN Secretary General would continue his efforts to achieve a solution and hoped the Cypriots would do the same.

Spehar thanked everyone that has worked with her, noting that she will always have a soft spot in her heart for Cypriots.

She will also have a farewell meeting with Turkish Cypriot leader Ersin Tatar on Monday.

Prior to arriving on the island as head of Unficyp in 2016, Spehar had served in the Europe Department at the UN Secretariat from 2009.

She was a senior official with the Organisation of American States for over 12 years, working on promoting democracy and developing the Organization’s instruments for dialogue and conflict resolution.

Her replacement is expected to be announced later in September. Reports have said Australian national Melissa Parke will most probably be the next head of the peacekeeping force in Cyprus.

An EU vs US comparison: Creating a profitable LLC business