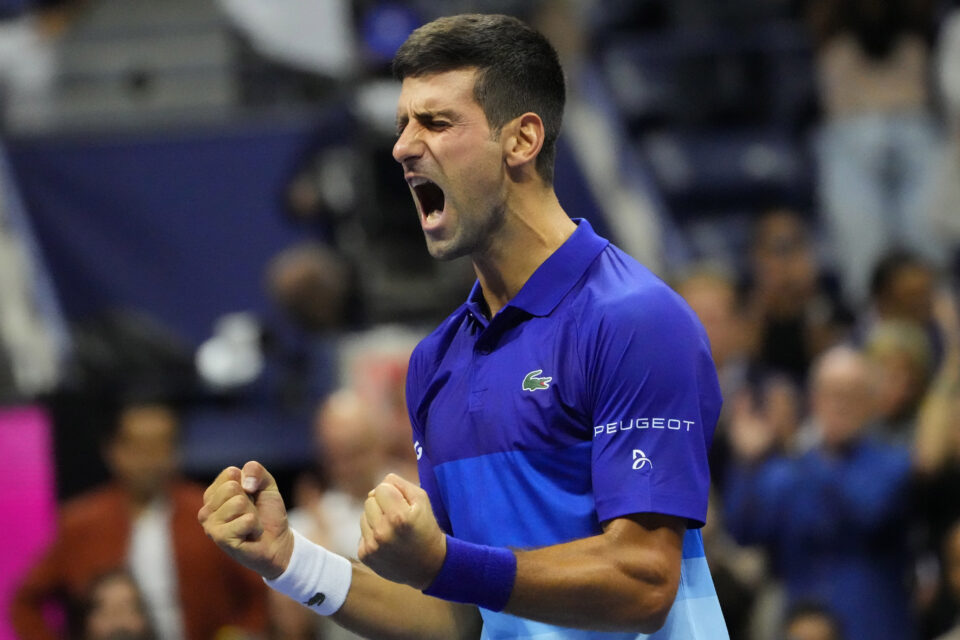 'There’s only one match left. All in, all in. Let’s do it,' Djokovic said. Credit: Robert Deutsch-USA TODAY Sports

Djokovic moved within one win of reaching a men’s record 21 Grand Slam titles and avenged his loss to Zverev at the Tokyo Olympics in front of a roaring crowd inside Arthur Ashe Stadium, with Rod Laver sitting in the front row, 52 years after he achieved the feat, the last man to do so.

“There’s only one match left. All in, all in. Let’s do it,” Djokovic said.

“I’m going to put my heart and my soul and my body and my head into that one. I’m going to treat the next match like it is the last match of my career.”

He will face Russian Daniil Medvedev in Sunday’s final, after the world number two sent off 21-year-old Canadian Felix Auger-Aliassime in his semi-final.

Djokovic handed the German his first break of the night with a double fault in the first set but otherwise showed no mercy, firing off 41 winners and a dozen aces across the entire match.

The third set was a matter of survival of the fittest. Djokovic had a 40-0 head start in the tenth game only to see Zverev fend off two break points through marathon rallies, including a 53-shot exchange, before he broke the German’s serve for the set point.

Tied at two sets a piece, Djokovic won a 30-shot rally for the early break, but after fending off four break points saw Zverev convert in the seventh game. He broke Zverev’s serve in the next game before hoisting his arms aloft to wild cheers from the crowd.

“The best atmosphere of the tournament so far,” said Djokovic, who has had a fitful relationship with the New York crowd at times. “These are the moments we live for and these are the kind of unique opportunities that we dream of everyday… So thank you so much for making it special.”

The evening was yet another disappointment for Zverev, who came within two points of winning the tournament a year ago and must once again walk away empty handed, after reaching the semi-finals of Roland Garros, as well.

“Alexander is a big champion, is someone that I admire on and off the court,” said Djokovic.

“I knew coming into the court today there is going to be a great battle, as we said, prior to this match. I hope that we brought energy.”

The 2019 runner-up looked rock-solid at the start, firing off seven aces and never facing a break point in the first set, where he had just five unforced errors and broke Auger-Aliassime’s serve in straight points in the seventh game.

Down a break in the next set, Medvedev looked like he might be in trouble but Auger-Aliassime twice failed to clinch on set point in the ninth game and Medvedev broke his serve.

A double fault from Auger-Aliassime in the 11th game – one of 10 across the entire match – helped Medvedev to another break before the Russian ran away with the momentum into the third set, where he dropped just one first-serve point.

“Second set defined the match because I was really close to lose it,” Medvedev told reporters after his win. “It turned the match around. I think he started doubting.”

It was the first Grand Slam semi-final for 21-year-old Auger-Aliassime, who reached the Wimbledon quarter-finals earlier this year and has been hailed among the sport’s brightest young stars.

“Against a player like that, you don’t really have room for mistakes, room for losing your focus, which I did at the end of the second,” Auger-Aliassime told reporters.

Medvedev, the world number two, continues his hunt for a maiden major title after losing to Novak Djokovic in the Australian Open final this year.

After picking up his fourth Masters 1000 title in Toronto last month, he has dropped just one set through six rounds at Flushing Meadows and is looking to lift the trophy for the first time after losing in five sets to Rafa Nadal two years ago.

“Last time was a crazy match,” said Medvedev. “If it’s going to be the same match on Sunday, I just hope I can win this time.”