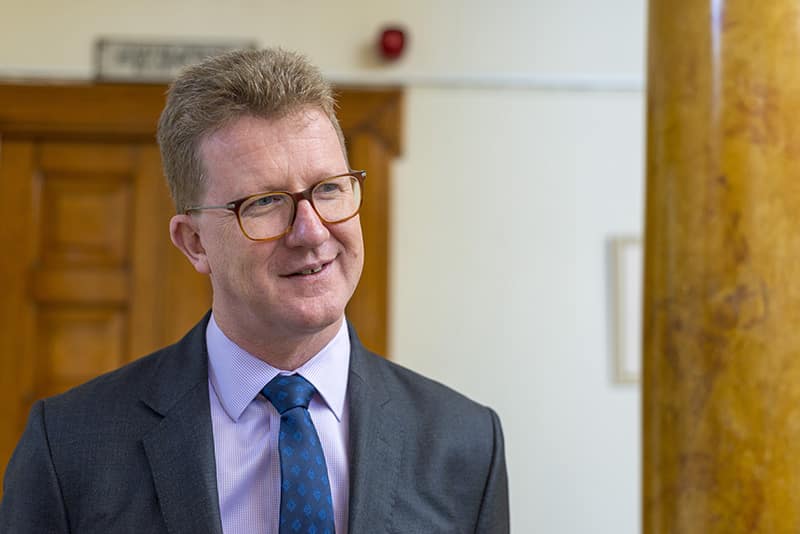 Britain is discussing a largely decentralized federation when it comes to the Cyprus problem, which should come as no surprise, as it is an idea tabled by President Nicos Anastasiades himself, British High Commissioner to Cyprus Stephen Lillie said in an interview published on Sunday in Kathimerini.

“We are talking about informal ideas, not a solid plan, and it is not what various circles have tried to describe,” he said.

“These ideas fall entirely within the framework agreed upon by the UN for a bizonal, bicommunal federation with political equality, which is honestly the only viable way out.”

Lillie added that it is not enough to repeat the term bizonal, bicommunal federation as a mantra of sorts or a slogan, but focus must be placed on the details of implementing such as solution.

The High Commissioner noted that Britain does not support a two state solution, as neither Greek Cypriots nor the international community favour this model.

The decentralised federation would give both communities a large degree of autonomy in relation to their daily life and would allow Cyprus to be an internationally recognised sovereign state.

“I continue to believe…that with energy, creativity, flexibility and political will, a solution to the Cyprus problem is possible.” Britain supports every effort towards attaining this goal, Lillie added.

He noted that the term “two internal states, one external” is not something new as it would mean on one hand, an internationally recognized federal state handling international relations such as diplomacy and defence, as well as some other powers ensuring the functionality of Cyprus as a sovereign state.

On the other hand, there would be two constituent states managing the majority of issues affecting the daily lives of the population such as health, transport etc. “This is a bizonal, bicommunal federation”

The High Commissioner also said during the interview that starting negotiations from where Crans Montana ended is a recipe for long and unfruitful discussions.

“There was a lot of work done to get to Crans Montana though, and the six-point framework of the UN General Secretary can still be built on and developed.”

What’s needed is creativity and flexibility as well as focusing on the challenging points that contributed to the failure in Crans Montana “specifically security and gurantees, as well as the detailed model of power sharing.”

Suggestions that there is an agenda pushing for a confederation is simply untrue, Lillie said “because we are doing no such thing.”

Commenting of Varosha, Lillie added that Turkey needs to comply with the relevant resolutions so the city can be a bridge towards a solution to the Cyprus problem, rather than an obstacle.

Glad to start again from scratch