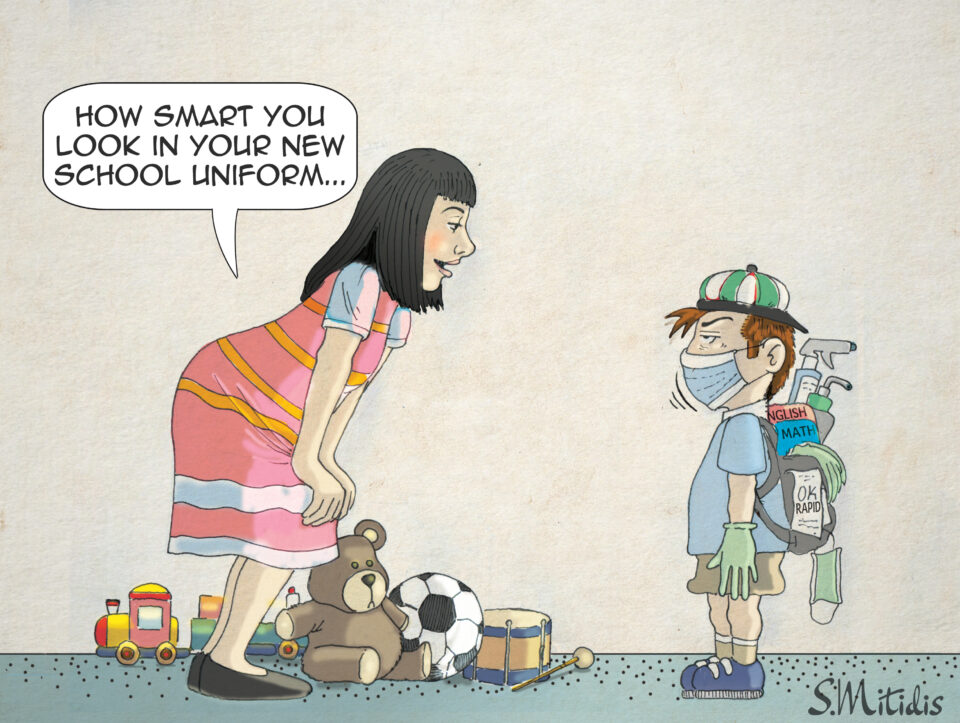 PRESIDENTIAL elections might still be 16-plus months away, but some candidates have expressed an interest in standing, without being too definite about it.

These are human rights lawyer Achilleas Demetriades, negotiator and diplomat Andreas Mavroyiannis and lawyer Marios Eliades, who has harboured presidential ambitions for decades. There is also Disy chief Averof Neophytou, who, being the leader of the biggest party, is also interested, but has not made his intentions known.

Meanwhile, someone who has not expressed his interest publicly has already begun his campaign. I refer to the scheming and devious Paphite foreign minister, Nikos Christodoulides, who appears fully focused on the 2023 presidential elections, making public appearances at every opportunity and having his wife giving interviews telling voters that he was the perfect father, husband and human being.

Christodoulides raised a few eyebrows at the presidential palace on Wednesday night when he failed to show up for the gala dinner and awards ceremony of the Invest Cyprus International Investment Awards, his named place on the top table, next to Prez Nik staying empty for the whole night.

Mr Perfect, in the eyes of his wife, decided his campaign would be better served by attending the charity ‘Dinner for Life’ of the Karaiskakio Foundation that supports people with leukaemia and runs a bone marrow donors archive. The dinner was held at the Strakka ranch of the widow of Tassos Papadopoulos, Fotini, and was a great opportunity for Christodoulides to butter up Junior, his mum and their Diko followers.

HIS ABSENCE from the presidential palace, however, was bizarre given that he has been at pains to make inroads into the business community, the bigshots of which were all present.

It was the first time, in the nine years the Investment Awards ceremony was held, that the minister in charge of the Cyprus Investment Promotion Agency (CIPA) was absent.

The colossal irony was that Christodoulides had arbitrarily taken CIPA, which was under the commerce ministry, and placed it under the authority of the foreign ministry – with the elections always in mind – in order to build links with the local business world.

To this end, he had forced all the members of the CIPA board to submit their resignation some three months ago so he could offer seats on the board to businessmen on whose loyalty and support he could rely, but he has still not appointed anyone. CIPA is still without a chairperson and a board, which makes you wonder who decided the winners of this year’s Cyprus International Investment Awards?

Had Nikos got rid of the board to take over this responsibility as well so he could make the winners feel indebted to him?

THE CAMPAIGN has been given a jolt by Christodoulides’ mentor, Prez Nik in the last couple of weeks. First, Nik publicly embarrassed him publicly rubbishing his claim that the proposal for a return to the 1960 constitution was a ‘figure of speech’. It was a proposal, he insisted, implying that his FM did not know what he was talking about.

On Monday, during an interview on Omega TV, came a delightful stab in the back. Asked who would be Disy’s presidential candidate, Nik said that the first say belonged to the party boss Averof. In short, rumours that the Prez would publicly support Nikos’ candidacy were sent to the recycle bin for now.

As there is not a chance in a million that Averof would entertain the idea of Christodoulides being the Disy candidate, the FM will have to rethink his scheming. There may have been method to the madness of snubbing the awards ceremony at the presidential palace and attending the Strakka charity dinner after all.

As he will not be a Disy candidate he may be working on becoming the Diko candidate. Unless Nik’s assertion that Averof had the first say was just a figure of speech.

ANOTHER man being touted as a possible candidate in 2023, Cyprus’ former EU Commissioner Christos Stylianides, appears to have ruled himself out of the race, by accepting a ministerial post in the government of Greece.

His appointment as Minister of Climate Crisis and Political Protection by Greece’s PM Kyriakos Mitsotakis, took many by surprise and inspired at least one conspiracy theory that was repeated even by people with a brain – Stylianides’ appointment was the first step in becoming a presidential candidate in 2023.

The theory is based on the assumption that Mitsotakis is of such low intelligence he would want to get involved in Kyproulla’s elections and be pilloried by Cypriots for blatant interference. The truth is that Mitsotakis is a very smart PM, who would never open such a can of worms.

His policy has been to distance his government from Kyproulla, as much as he can, so why on earth would he want anything to do with the madhouse’s elections?

WE ARE still waiting for the education ministry to announce the date, time and place for the burning of the schoolbooks that it had to withdraw because they provocatively presented Kemal Ataturk as “Turkey’s greatest hero” and, scandalously claimed he “was a moral leader” and “courageous in battle.”

What angered the education minister and ministry mandarins was that nowhere in this gushing text about Ataturk did it mention that he mixed his raki with human blood. But this was to be expected as the offending school workbook was written by Turk-loving Brits, who always present Turkey as a country of angels.

The minister is scheduled to meet Prez Nik on Tuesday to discuss the controversy created by the ministry’s rash orders to teachers to tear out the page of the schoolbook featuring the biased Ataturk write-up. Details about the book-burning event could be decided at the meeting.

THE COMRADES at Akel were mightily pissed after Disy chief Averof not only embraced their populist suggestion for a cut in electricity prices which had increased by almost 40 per cent compared to August 2020, but also made it happen at a meeting with the EAC board, called by energy minister Natasa Pilidou.

It was a bit of a coup, given the Akel general secretary had asked for a meeting with Pilidou to present the party proposal and he was given an appointment on Tuesday. The wily Averof, however, did a spoiler. He met the board and minister on Friday and immediately after was live on telly announcing the cuts that he had secured for all of us.

The comrades were livid with the minister for this “unprecedented institutional aberration” saying that someone should explain that “the state is not the spoils of Disy.” Where have the comrades been living, for the last eight years, not to have noticed that it is?

Anyway, even those that have been plundering the EAC for decades – the unions – and maintaining its monopoly so they can keep doing so, have given their consent to the reduction in rates, which would be covered by the Authority’s reserves, not from any wage cuts. The generosity of the union leeches is rivalled only by that of the political parties.

WE HAVEN’T heard a word from the guardian of public finances, Odysseas about the squandering of EAC reserves, which are needed for development projects and to cover loans. Is this because he does not object to public money being squandered on worthy populist causes?

The holier-than-thou Odysseas ignores many tens of millions of EAC reserves being squandered on the politically-motivated price cuts, but gets tough when a few thousand euro are spent. He vetoed the €10,000 that the CySec board had decided to spend on a farewell party for its outgoing chairperson Demetra Kalogirou, who completed 10 years in the job.

It was the taxpayer’s money that would be spent on the bash so Odysseas had a point, but there is sneaking suspicion that he has a tendency to make a big fuss about small amounts of the taxpayer’s money being wasted (use of state cars for private purposes for example) while ignoring the big amounts. Even bean-counters yearn for popularity.

ARCHBISHOP Chrys appears to have threatened bishops with financial punishments if they do not promote the Holy Synod in backing and encouraging vaccinations. He said he expected the members of the Synod to give instructions to all priests to implement this decision and those who did not, apart from having their bottoms spanked, will be punished in a number of other ways.

He proposed they be expelled from the Synod and deprived of standing and voting in Church elections. Chrys is aware there will be elections for his successor in the not-too-distant future. Priests that rail on against vaccinations will not receive their wages, while bishoprics would have their funding cut as hotels would be closed. Why hotels would be closed he failed to explain.

AFTER DISCUSSING vaccinations, the Synod was visited by Prez Nik, so he could brief the members about the latest lack of developments in the Cyprob and explain his proposal for the return to 1960, which, according to what he said in the Omega TV interview, had substance.

The good news for the Cyprob, according to a report in Phil, was that the UN Secretary-General “wants to take advantage of the momentum.” What created this momentum? Letters sent to Antonio Guterres by the two leaders expressing the wish for a meeting in New York. We hope and pray Guterres takes full advantage of this momentum and does not miss another opportunity for a new deadlock.

One more nail in the coffin of a bicommunal Cyprus

Our View: There is no room for critical thought at public schools