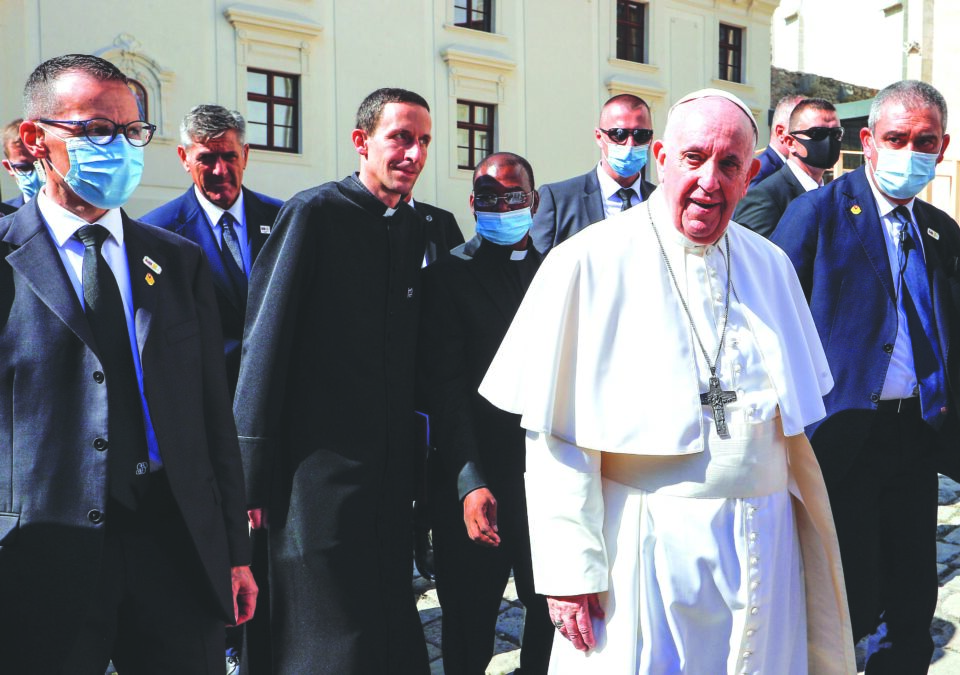 Pope Francis walks outside the Cathedral of Saint Martin in Bratislava, Slovakia, September 13

Pope Francis warned against too much focus on individual rights and culture wars at the expense of the common good on Monday during a visit to Slovakia amid increased nationalism and anti-immigrant sentiment across eastern Europe.

The 84-year-old Francis is making his first trip since undergoing intestinal surgery in July and has appeared to be in good form. Asked by a reporter on Monday how he felt, he joked: “Still alive.”

On the first papal visit to Slovakia since 2003, Francis returned to a theme he had touched on during a stopover on Sunday in Hungary on how nations should avoid a selfish, defensive mentality, as he recalled the region’s communist past.

Addressing Slovak President Zuzana Caputova, other officials and diplomats in the gardens of the presidential palace, the pope added: “Fraternity is necessary for the increasingly pressing process of (European) integration.”

Slovakia, part of Czechoslovakia during communist times, secured its independence from Prague in 1993. The Slovak and wider eastern European economies have since boomed but their integration into the European Union has also coincided with a nationalist backlash against increased illegal immigration, often involving Muslims from the Middle East and Afghanistan.

Slovakia’s neighbours, Hungary and Poland, have been at loggerheads with the EU over their hard-line stance on migration as well as over their judicial reforms and curbs on media freedoms.

In September, Brussels told Poland its challenge to the primacy of EU law over national law was holding up the release of 57 billion euros in recovery funds to deal with the effects of the COVID-19 pandemic.

Francis specifically mentioned the EU recovery plan on Monday, saying people were “looking forward with hope to an economic upturn” it is meant to underpin.

The pope has often called for European solutions to the migrant crisis and has criticised governments that try, like Hungary’s, to tackle it with unilateral or isolationist actions.

In Budapest on Sunday, in an apparent response to nationalist Prime Minister Viktor Orban’s stand that Muslim immigration could destroy its heritage, he said preserving a nation’s deeply rooted Christian heritage did not exclude a welcoming, caring attitude for others in need.

“Our Christian way of looking at others refuses to see them as a burden or a problem, but rather as brothers and sisters to be helped and protected,” he said on Monday.

From the presidential palace, Francis went to a meeting with the bishops and other religious leaders of Slovakia, which is about two thirds Roman Catholic.

Later he was due to visit a shelter for the poor and to meet representatives of Slovakia’s Jewish community. He returns to Rome on Wednesday morning.

Anastasiades to receive Lillie amid grumbles over decentralised federation remarks