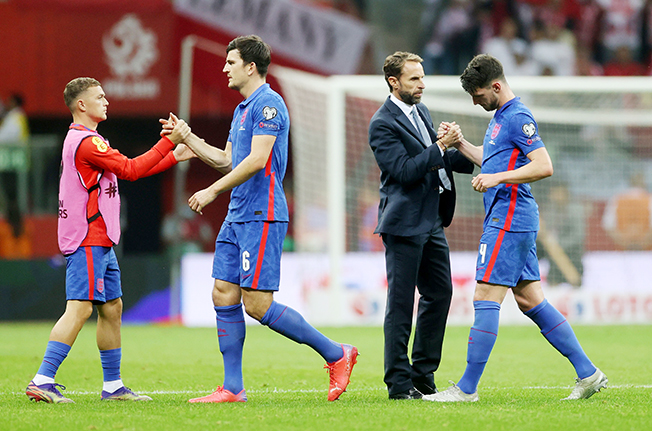 Having sat fourth in the standings since April 2019, the Three Lions leapfrogged world champions France to move up to third in the list released on Thursday.

England have moved into the top three of the FIFA rankings for the first time in nine years following their results during the September international break.

Having sat fourth in the standings since April 2019, the Three Lions leapfrogged world champions France to move up to third in the list released on Thursday.

Belgium remain top-ranked with Brazil still in second but Gareth Southgate’s side are now in the top three, matching their best-ever position within the ranking system.

They held onto third place for August and September in 2012 under Roy Hodgson and have now amassed enough points to regain a spot on the podium.

Following on from their Euro 2020 final defeat to Italy on penalties, England recorded back-to-back 4-0 wins over Hungary and Andorra before drawing 1-1 in Poland as they continue their quest to qualify for the 2022 World Cup in Qatar.

England were as low as 13th when Southgate was appointed as manager permanently in November 2016.

Since then England have reached the semi-finals of the 2018 World Cup, the last four of the inaugural Nations League the following summer and made their first major final in 55 years before losing to Italy in July.

Scotland and Northern Ireland both enjoyed a leap of four places, to 45th and 47th respectively, while the Republic of Ireland dropped to 50th and Wales remained in 19th.