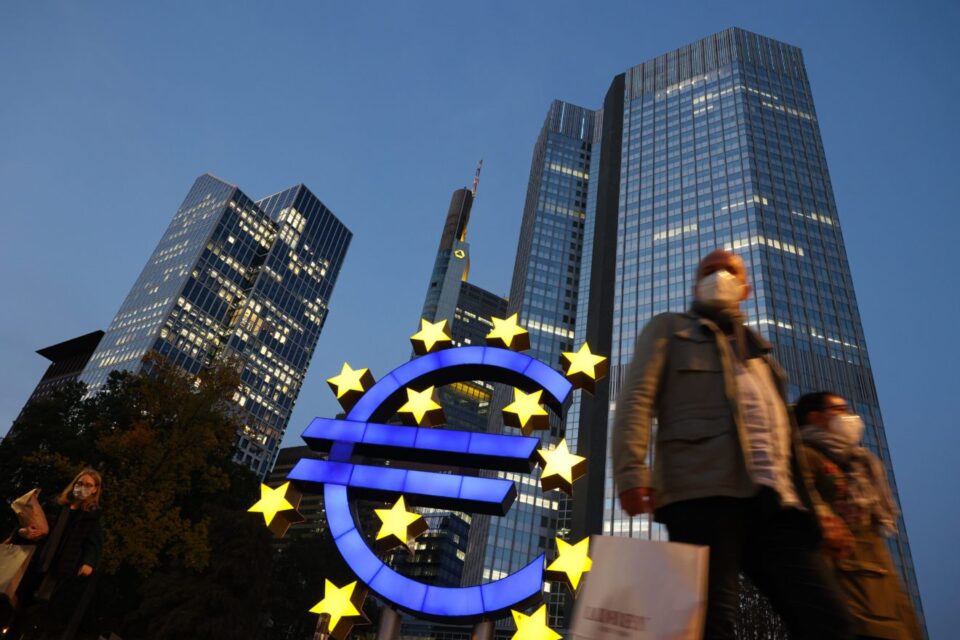 Prospects for growth in southern European countries are in jeopardy

Following the global recession and the European sovereign debt crisis the ECB adopted a policy of monetary accommodation to raise the inflation rate as measured by the Harmonized Index of Consumer Prices (HICP). While interest rates in Europe trended downwards from 2012 the targeted inflation rate has only been reached or exceeded in recent months as price pressures from the supply side intensified. However, the abundant provision of liquidity provided by the ECB to euro area economies through its programme of very large government bond purchases has led to substantial increases in asset prices of bonds, shares and property in most euro area countries. The sharp rise in asset prices in conjunction with negative real interest rates has in turn contributed to widening income, wealth and intergenerational inequalities as well as fueling large increases in the indebtedness of both the private and public sectors. It is further argued that these inequalities and the heavy burden of debt seriously jeopardise the prospects for sustained and inclusive growth, particularly for most southern European countries.

As a key part of its accommodative monetary policy operations from 2012 onwards the ECB steadily reduced its main interest rates with its overnight rate on deposits at the ECB reaching minus 0.50% in September 2019, remaining at this negative level ever since. And with the ECB’s programme of quantitative easing involving immense purchases of government bonds, yields on these securities fell sharply, reaching negative levels in a number of countries. In fact, reflecting the convergence of bond yields of euro area countries toward ultralow levels the yield on German ten-year government bonds fell from 0.83 per cent in mid-2015 to minus 0.38 per cent by August 2021, while those on Cyprus ten-year government bonds declined from 4.25 per cent in mid-2015 to 0.21 per cent in August 2021. In essence, the ECB has suppressed bond yields for euro area countries with its purchases, in the process enabling governments to borrow at very low rates and speculators to benefit from higher prices.

In response to the expansionary monetary operations of the ECB, loan and deposit interest rates of banks in the euro area have been reduced to extremely low levels. Indeed, loan rates in Germany have been lowered to under 1.0 per cent, while in Cyprus loan rates generally have ranged from 2 to 4 per cent over the last two years. And deposit rates in most euro area countries including Cyprus had descended to around zero by early 2020 and have remained at ultralow levels.

Following prolonged and substantial increases in equity, bond, and property prices in most euro area countries caused in large part by the expansionary monetary policies of the ECB, the HICP in recent months fueled importantly by supply factors has risen above the targeted rate of 2 per cent. While debate is intensifying about whether the current upsurge in consumer prices could be more than transitory, there should be real concern that higher prices of goods, services and assets have brought real interest rates to very negative levels. Ultralow interest rates punish savers and encourage speculation in financial assets and property. But, it is unfortunate that the ECB in its policy formulation appears to take little account of rising asset prices. Indeed, given that euro area house prices have risen at an average annual rate of 5 per cent between 2015 and early 2021, while mortgage rates in most euro area countries over this period were kept well below 4 per cent per annum, it can be argued that relevant real interest rates for house purchases are much too low and are creating credit-fueled property bubbles and unaffordable house prices and rents for many Europeans.

Furthermore, increasingly negative real interest rates on saving instruments such as bonds and bank deposits are making it very difficult for younger persons and the elderly, respectively, to accumulate savings to purchase a house and have a decent retirement income.

Central banks’ monetary policies have contributed to adverse side effects in the form of widening income, wealth and intergenerational inequalities. Asset owners in many euro area countries have benefitted disproportionately from the prolonged and spectacular increases in share and bond prices propelled significantly by ECB policies. Meanwhile, others, in particular the young, who have been totally priced out the property and stock markets, are giving up, and flocking to bitcoin and other cryptocurrencies in search of returns. Furthermore, low interest rates fail to assist the many lower-and middle-income households that have relied traditionally on real positive interest rates to supplement their incomes and save to ensure adequate housing, education and healthcare for their families. And the older generation of property owners not only benefit from rising house prices, but can rent their property at higher prices to younger persons who increasingly cannot afford to purchase a house.

It can be argued that the aforementioned side effects of ECB policies related to widening wealth and income inequalities are hampering the sustained recovery of European economies. Wealthier and high-income households have a much lower propensity to consume, at least of the items in the HCPI that exclude house prices, as compared with the bulk of less wealthy and lower income households and thus the distribution of wealth and income toward the former can be expected to lower consumer demand and economic growth.

And with the younger less wealthy generation being hurt disproportionately by ultralow interest rates and governments in most southern European countries taking advantage of ultralow interest rates to borrow heavily rather than undertaking structural reforms to adjust their economies the younger generation in countries such as Italy, Spain, Portugal, Greece and Cyprus are likely to be faced with greater financial difficulties including higher taxes to meet the burden of greater government debt repayments. In consequence, their ability and willingness to create families and raise offspring with good education and healthcare are significantly diminished, hence lowering the longer-term potential of southern European countries in particular to achieve sustained and inclusive growth.

How should governments in the euro area and the ECB respond with policies to deal with the problems of widening inequalities outlined above stemming from ultralow nominal interest rates and higher inflation? In brief, monetary policy should once again be guided by movements in real interest rates. And people with low and moderate incomes and few assets should be protected by conventional monetary practices, mainly by ensuring low and stable inflation taking into consideration surging house prices so that living standards are not eroded. Furthermore, tax systems should be redesigned so as to tax the wealthy and high-income earners more heavily and reduce taxes on lower incomes and on essential consumer needs (for example, lower VAT rate on basic food products). But efforts to redistribute wealth and disposable incomes via fiscal policies are hardly sufficient. More importantly, policies should aim at productively implementing in cooperation with EU institutions the various country Recovery and Resilience plans giving emphasis to the challenge of creating decent jobs so as to narrow inequalities and achieve sustained and inclusive growth.