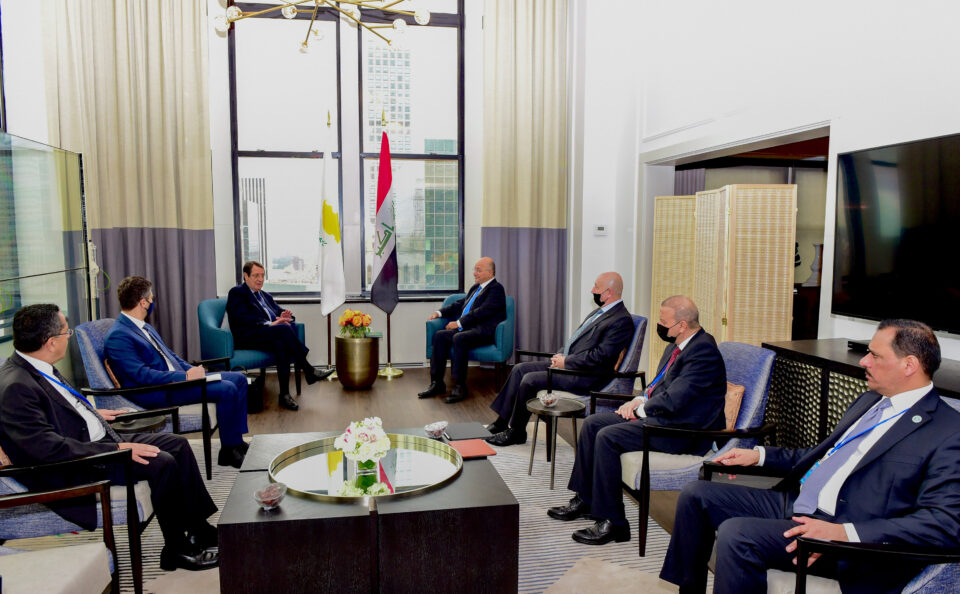 President Nicos Anastasiades met with his Iraqi counterpart Barham Salih in New York on Wednesday on the sidelines of the 76th UN General Assembly.

According to a press release from the Presidency, the two heads of state discussed, among other things, regional developments, the current situation in the Cyprus issue, bilateral relations, EU-Iraq relations, as well as the prospect of Iraq’s participation in the tripartite cooperation mechanism of Cyprus, Greece and Jordan, with the participation of Egypt.

President Anastasiades noted Cyprus’ interest in stability and security in Iraq, which affects neighbouring countries and the wider region.

“The prospect of Iraq’ participation in the tripartite cooperation mechanism of Cyprus, Greece, Jordan, with the participation of Egypt (3 plus 2), following a proposal by Jordan, and the possible hosting of such a meeting in Cyprus were also discussed,” the press release said.

“The President of the Republic also referred to the Turkish provocations against Cyprus, as well as to the instrumentalisation of migration by Turkey,” it added.

The Iraqi President briefed the President on the current situation in Iraq and the upcoming elections in the country.

The meeting was also attended by Government Spokesman Marios Pelekanos, Cyprus’ Permanent Representative to the United Nations, Ambassador Andreas Hadjichrysanthou and Deputy Director of the Diplomatic Office of the President Koula Sophianou.