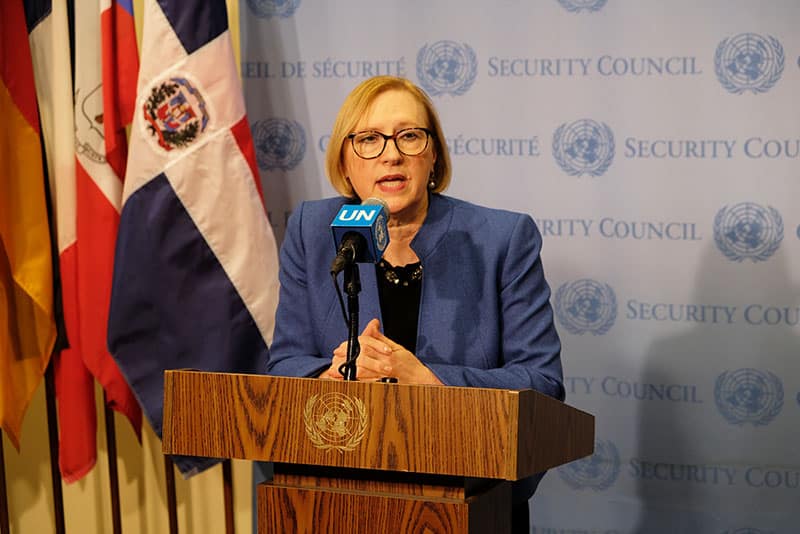 We expect great things from Cyprus leaders but they need help, and citizens must get engaged and contribute to efforts for a sustainable solution to the Cyprus problem, the UN Secretary-General’s Special Representative in Cyprus, Elizabeth Spehar has said.

Addressing a reception on Wednesday, in view of the completion of the UN Youth Champions Programme for Environment and Peace 2021, organised together with the British Council and the COOPower project, and to also celebrate the International Day of Peace, Spehar said that in order to solve the Cyprus problem in a sustainable way “we need all citizens to pitch in and certainly we believe that young people in particular have a crucial role to play.”

Addressing the young people who attended the event and participated in the Programme, Spehar told them that “every grain of sand that you put towards environment and peace, towards reconciliation, towards understanding the views and the aspirations of young people from the other side, this is all an extra stepping stone towards a sustainable peace and that’s what we need to get to.”

“We expect great things from your leaders but the leaders also need help. And we believe that you can contribute to what they are trying to achieve is finally solve the long-standing Cyprus problem,” she added.

Moreover, Spehar noted that climate change is one of the very serious worldwide challenges to which the UN Secretary General, Antonio Guterres, referred while speaking during the UN General Assembly in New York.

The UN official also underlined the need for collective action to address the current challenges and resolve conflicts around the world.

Moreover she thanked all those that contributed to the implementation of the UN Youth Champions Programme for Environment and Peace 2021, in which 25 young Greek Cypriots and Turkish Cypriots participated.

The event was also attended by the UK Deputy High Commissioner to Cyprus and the Director of the British Council in Cyprus, who also addressed participants, underlining the role of young people in establishing peace.

Co-chairs of the bicommunal Technical Committee on the Environment were also present at the reception,

Cyprus has been divided since 1974, when Turkish troops invaded and occupied 37% of its territory.