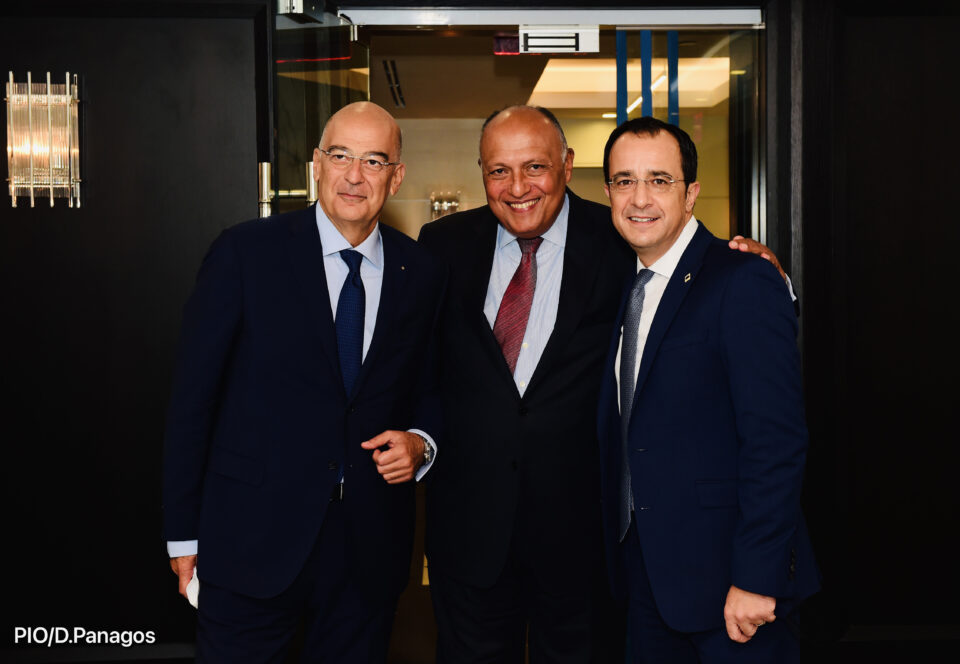 The Foreign Ministers of Cyprus, Greece and Egypt, Nikos Christodoulides, Nikos Dendias, and Sameh Soukry discussed on Thursday in New York the possibility of inviting other states to participate, on an ad hoc basis, to the deliberations held in the framework of this trilateral cooperation scheme. They also did preparatory work in view of the Trilateral Summit that is scheduled to take place in October in Greece.

The three Ministers’ meeting took place in the framework of their presence in New York for the UN General Assembly.

The press release said that during the trilateral meeting which Christodoulides had with his counterparts of Egypt and Greece the three Ministers reviewed the progress of what has been agreed so far in the framework of the three countries’ cooperation, reaffirmed the attachment of all parties to institutionalising mechanisms for monitoring the work done through the Permanent Secretariat that is expected to begin operating very soon in Nicosia, discussed the possibility of inviting other states to participate in the deliberations of the trilateral cooperation, at an ad hoc basis, and did preparatory work in view of the Trilateral Summit that is scheduled to take place in October in Greece.

During Christodoulides’ meeting with the Arab League’s General-Secretary Ahmet Aboul Gheit, the two men discussed developments in the broader Eastern Mediterranean and Middle East region and ways to further enhance the cooperation of Cyprus with the League.

To this end, it was decided to immediately launch consultations with a view to draft a Memorandum of Understanding for political consultations between the two parties. The aim is for this MoU to be signed during a visit which Gheit will pay to Cyprus during the next period.

During his meeting with the Deputy Prime Minister and Foreign Minister of Qatar, Sheikh Mohammed bin Abdulrahman Al-Thani, Christodoulides discussed issues related to the two countries’ bilateral cooperation, focusing on Energy issues and prospects of further enhancing the relations in the business field. Moreover, they exchanged views on the EU-Qatar relations, while Christodoulides briefed Al-Thani about the latest developments in the Cyprus problem.

Christodoulides discussed with the Foreign Minister of Armenia, Ararat Mirzoyan, issues of common interest and both of them reassured the high level of the bilateral relations, which is based on the close historic ties between the two countries’ peoples. The Armenian Minister accepted an invitation by Minister Christodoulides to visit Cyprus, with a view to further enhance relations.

Cyprus’ Foreign Minister also had a working lunch with the Deputy Prime Minister and Foreign Minister of Jordan, Ayman Safadi, during which they discussed, among others, the further enhancement of the excellent bilateral relations between Cyprus and Jordan, the latest developments in the broader region, and the next steps in the joint effort of the two countries to enhance regional cooperation and dialogue, on the basis of a positive approach.

During the meeting which Christodoulides had with the Foreign Minister of Guyana, Hugh Hilton Todd, the two men discussed issues of mutual interest, focusing on the field of Energy and especially the prospects and challenges created by the discovery and exploitation of hydrocarbons, and looked into ways of enhancing the cooperation between the two countries, both at the bilateral level and in the framework of action at international organizations, where they are both members, as the UN and the Commonwealth.

Following that, Christodoulides had consecutive meetings with the Foreign Minister of Mongolia, Battsetseg Batmunkh, and the Foreign Minister of Rwanda, Vincent Biruta, with whom he discussed international and regional issues of common interest, and had the opportunity to exchange views aiming at securing support to Cyprus’ candidacies for various international bodies and organizations.