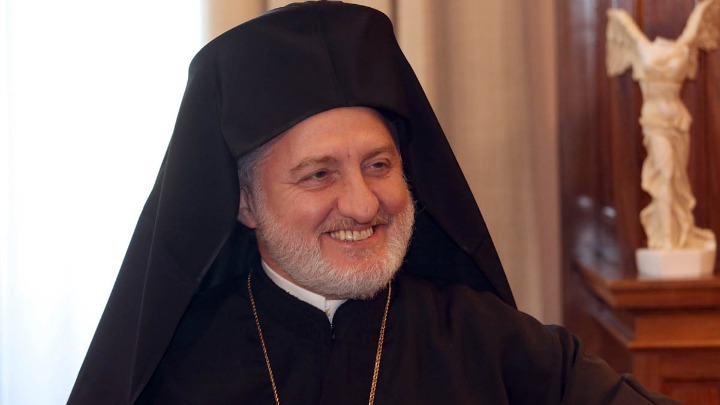 Greek Orthodox Archbishop of America Elpidoforos defended his participation in an event in New York earlier in the week where Turkish Cypriot leader Ersin Tatar was presented as ‘president of the TRNC’, arguing it was not a recognition of the north but part of his mission to protect religious freedom.

Following strong reactions by the Greek and Greek Cypriot communities in the US and reports of the cancellation of scheduled meetings by President Nicos Anastasiades and Greece’s Prime Minister Kyriacos Mitsotakis, Elpidoforos issued a statement defending his attendance at the event.

On Friday, however, Greek government spokesman Yiannis Economou announced that after explanations given by Elpidoforos to them the issue was over and he and Mitsotakis met in the evening.

“The Greek government and the archbishop of America cannot but be on the same side of the hill no matter the unfortunate incidents that may take place from time to time,” Economou said.

On Friday evening CyBC reported that President Nicos Anastasiades also decided to rescind his previous decision to call off his meeting with Elpidoforos in an effort to “put the matter to rest”.

Elpidoforos said that as an Istanbul Greek he and his family have experienced the dreadful consequences of being uprooted from their ancestral land as did many of their compatriots but also people from the Imvros and Tenedos islands, “due to another escalation of the Cyprus issue in the 1970s.”

“I grew up with this pain, which is why I understand the pain of our Cypriot brothers, as well as their feelings and reactions,” he added. “I consider them expressions of pain of people who lost everything: property, homelands, dreams, family, relatives.”

So, he said, his presence at Monday’s event could never be a recognition of a calamity, or of an occupation but has always had the same constant orientation: honest and courageous dialogue, for a future with peace and protection of religious freedom.

“We are all united in defending our national interests, each in his own way and role. But united, committed to the same goal,” he added.

“I sincerely regret the pain I inadvertently caused to my Cypriot and Greek-American brethren, especially to my beloved flock,” he said.

Elpidoforos said he prays for a just and lasting solution for Cyprus, based on international law and the protection of human rights, in accordance with UN resolutions, “and I’m working towards this goal,” he added.

He said the Greek Orthodox Archdiocese of America has been standing for a century by the side of Hellenism everywhere, defending its expectations. “Our unity is my ministry and my obligation,” he added.

Anastasiades initially called off his meeting with Elpidoforos, while it was announced late on Thursday that Mitsotakis would forgo a tour by the archbishop of the recently reconstructed Greek Orthodox church at Ground Zero that was scheduled on Friday.

The archbishop had attended the opening in New York on Monday of the Turkish House (Turkevi Center) by Turkish President Recep Tayyip Erdogan. Elpidoforos and Tatar are seen in a photo as among the people cutting a ribbon for the opening of the building that will house the Turkish permanent mission to the UN, the Turkish Consulate and offices to be used by the Turkish Cypriot side. UN Secretary-General Antonio Guterres was also among them.

This also offended the Hellenic American Leadership Council and the International Coordinating Committee – Justice for Cyprus (PSEKA), that expressed their dismay at the presence of Guterres and Elpidoforos.

“We understand the need and special ability of both to hold dialogue with Turkish authorities,” they said in a statement, but argued that “dialogue is one thing; participating in disingenuous charm offensives and publicity stunts is an entirely different matter.”

Both Guterres and Elpidoforos, the organisations said, had prior knowledge that Tatar was going to participate at the event as ‘president’ of the illegal ‘Turkish Republic of Northern Cyprus’ but chose to appear with him.