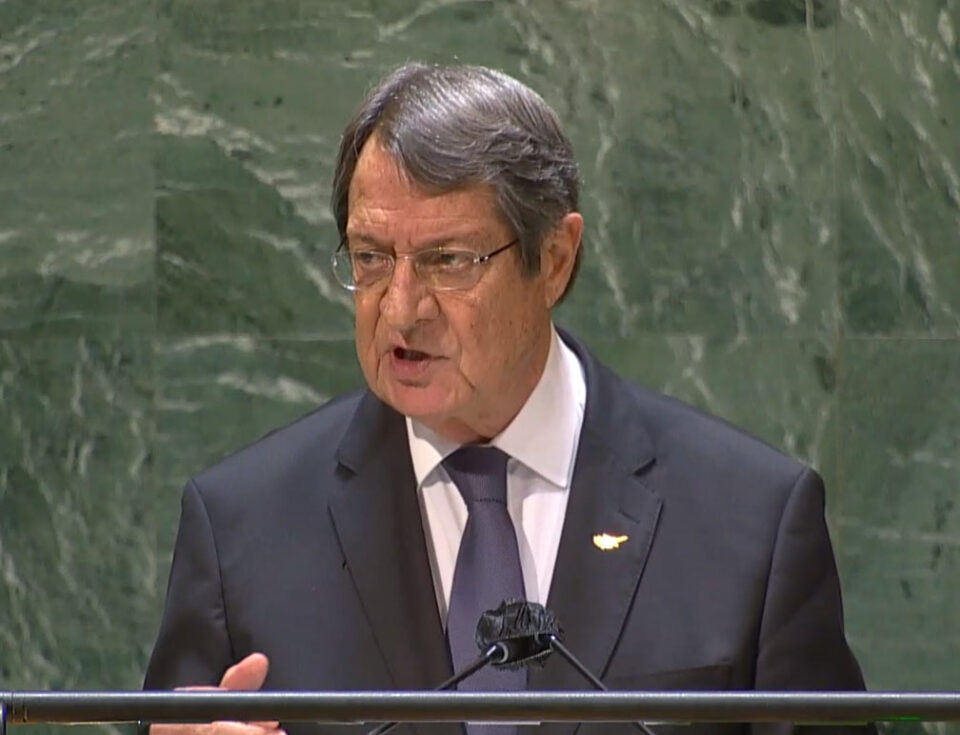 Lack of means for the implementation of UN resolutions have allowed Turkey the audacity to pass itself off as a victim instead of the perpetrator it actually is, President Nicos Anastasiades said on Friday addressing the 76th UN General Assembly in New York.

“I stand here before you representing a country which, regrettably, still endures the consequences of the blatant violation of the fundamental principles of the United Nations, as a result of the 1974 illegal military invasion of Turkey and the ongoing occupation,” he said.

Ever since, he added, both the UN General Assembly and the Security Council, have issued numerous decisions and resolutions, calling on Turkey to end the illegal occupation and withdraw its occupying troops, establishing at the same time the basis for reaching a comprehensive solution to the Cyprus problem.

“Decisions and resolutions which – in the absence of resolve and the necessary means for the implementation thereof – have led to the audacity of the invader who tries to be portrayed as a victim, instead of the perpetrator it actually is,” Anastasiades said.

He said though it was not his intention to engage in a blame game, he could not ignore “the absurdity of the Turkish rhetoric, which lies in their claim that the efforts for a compromise have been exhausted and the focus should now be on reaching a settlement based on the so-called ‘realities on the ground’.”

Recalling “the true realities on the ground”, Anastasiades said among other things that Turkey continues to occupy 37 per cent of the territory of the Republic of Cyprus, an EU member-state, with more than 40,000 troops still deployed on the island.

He also said that one third of Greek Cypriots were forced to leave their ancestral homes while the Turkish Cypriots who owned approximately 14 per cent of the privately owned land, “today they usurp 37 per cent of the island.” 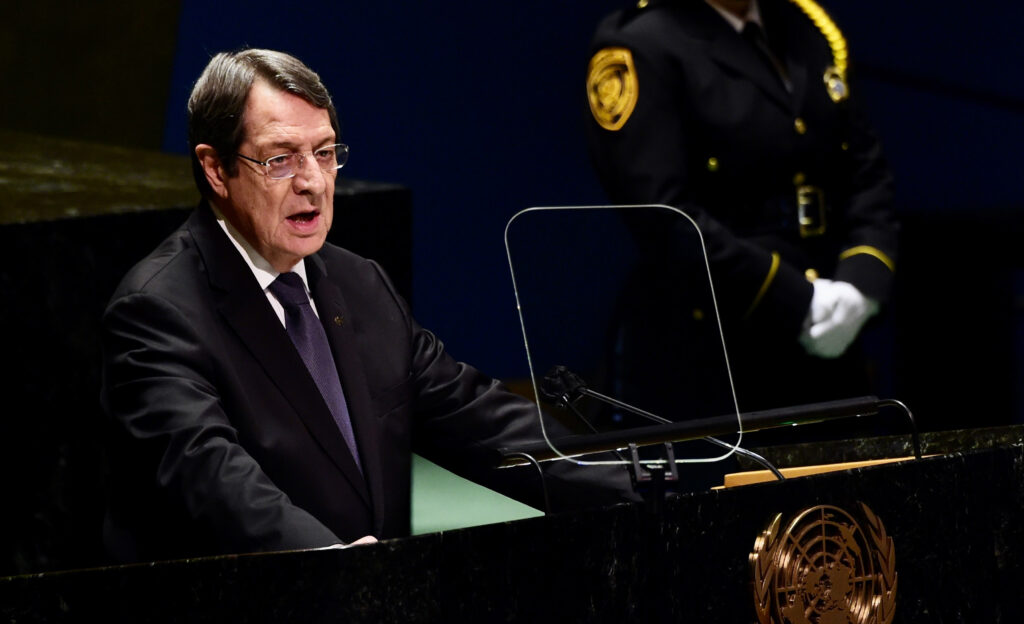 Anastasiades said all the crimes Turkey has carried out in Cyprus have been condemned by the European Court of Human Rights and the Council of Europe in a plethora of decisions, with Turkey failing to comply with even one ruling.

He also said Turkey has established an illegal entity in the occupied areas, which is under its absolute political, economic, societal, cultural and religious control, which is also denounced by the majority of Turkish Cypriots. Turkey, he added, tries to equate the internationally recognised Republic of Cyprus – a UN and EU member – with the illegal secessionist entity condemned by the Security Council and considered legally invalid.

He also referred to Turkish President Recep Tayyip Erdogan’s latest visit to the north and efforts to change the status of the fenced city of Famagusta, contrary to Security Council resolutions and to the condemnation by the international community.

Commenting on Erdogan’s statement during his address at the UNGA that he hoped the problems on maritime boundary delimitation would be resolved within the framework of international law and good neighbourly relations, Anastasiades wondered “as to which international law Mr. Erdogan refers.”

“Is it not a fact that Turkey refuses to abide by the 1982 United Nations Convention on the Law of the Sea, which codifies relevant customary international law?” he asked.

He asked whether Erdogan was referring to Turkey’s own arbitrary interpretation of international law which reduces the exclusive economic zone of Cyprus by 44 per cent at the expense of both Greek Cypriots and Turkish Cypriots.

He also questioned, Erdogan’s call for the need for good neighbourly relations, arguing that it was Turkey that invaded and still occupies Cyprus, violates the sovereign rights of Greece, invaded Syria, violates the sovereignty of Iraq, intervenes in the internal affairs of Libya and interfered in the Nagorno-Karabakh conflict.

Anastasiades also said the narrative put forward by the Turkish side, according to which all efforts to reaching a compromise have failed and solutions were necessary outside the UN framework, “reinforces the valid arguments that Turkey’s end game is not to solve the Cyprus Problem, but to turn Cyprus into its protectorate.”

On the negotiations process, the president spoke of “blatant interventions” by Turkey by ousting the leader of the Turkish Cypriot community, with whom a Joint Understanding was reached in November 2019 as to the principles which should guide the resumption of a new round of negotiations, namely: the Joint Declaration of 2014, convergences reached so far, and the six-point framework presented by the UN Secretary-General at Crans Montana.

“The evident goal was for him to be replaced by a new leadership which reproduces and adopts Turkey’s position for changing the agreed basis for a settlement, with the ultimate goal being a two-state solution,” he said.

Anastasiades also said a compromise becomes even more difficult to reach when new ideas put forward by the Greek Cypriot side, as per the UNSG’s request, and in an effort to move the process forward, are blatantly rejected.

He also referred to his own proposals such as the decentralisation of the exercise of powers, considering the option of a parliamentary system with a ceremonial head of state and rotating prime minister, and the invitation to the Turkish Cypriots to rejoin the state institutions established by the 1960 Constitution of the Republic of Cyprus, thus, fully implementing, mutatis mutandis, its relevant provisions. The latter, he said was meant, not as an alternative to the agreed basis of the settlement but to ease the Turkish Cypriot community back into the state pending a final settlement, provided a strategic agreement is reached, thus, fully participating in the evolution of the Republic of Cyprus into a Federal State.

Concluding, Anastasiades gave reassurances of his determination to set the negotiation process back on track, on the basis of the UN framework and the agreement reached in Berlin on November 25, 2019 for a settlement based on a bi-zonal, bi-communal federation with political equality, as set out in relevant Security Council resolutions and in line with the EU principles.