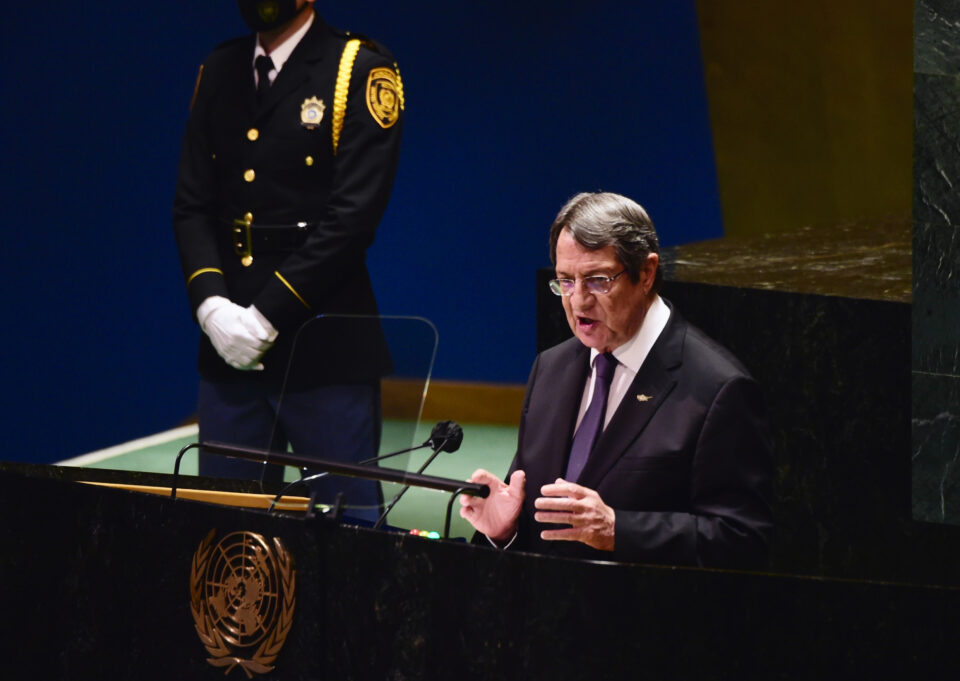 Main opposition Akel said Saturday the president was correct to highlight Turkey’s aggression during his speech before the UN General Assembly, but he should have also sought to break the deadlock by making a proposal that was in line with UN expectations.

The party said every international stage should be used to put pressure on the occupying power to end its illegal activities and at the same time call on the international community to hold Turkish President Tayyip Erdogan accountable for his actions.

“At the same time, we have the view that the president’s address should be complemented with a proposal to break the deadlock that would meet what the UN expects,” Akel said.

Instead, President Nicos Anastasiades revisited ideas that were outside the framework of UN resolutions like the return to the 1960 constitution.

“He tabled anew ideas that undo key agreed convergences (decentralised, parliamentary system), which clashes with his declaration that he is prepared to continue the talks, given the convergences.”

The immediate objective, the party said, should be to halt Turkey’s attempt to make the division permanent.

Ruling Disy party leader Averof Neophytou said he was satisfied by the address, which made it clear there was no other solution framework than the bizonal, bicommunal, federation.

“What was and what is at the forefront of all struggles, of all governments, is that the Republic of Cyprus is not dissolved, but it evolves from a unitary state to a bizonal, bicommunal, federal state,” he said.

Edek reiterated its opposition to a bicommunal, bizonal, federal solution, saying it was racist.

“Any solution that does not ensure full implementation of the European acquis and leads to geographical and ethnic division, is not accepted by Edek,” the party said in a statement.

Edek said it wanted a solution that would reunite the country into one people, one state, with the political and human rights of all its citizens secured.

In his speech before the UN on Friday Anastasiades reiterated proposals such as the decentralisation of powers, a parliamentary system with a ceremonial head of state and rotating prime minister, and the invitation to Turkish Cypriots to rejoin the state institutions established by the 1960 constitution.

The latter, he said, was meant not as an alternative to the agreed basis of the settlement but to ease the Turkish Cypriot community back into the state pending a final settlement, provided a strategic agreement is reached, thus, fully participating in the evolution of the Republic of Cyprus into a federal state.