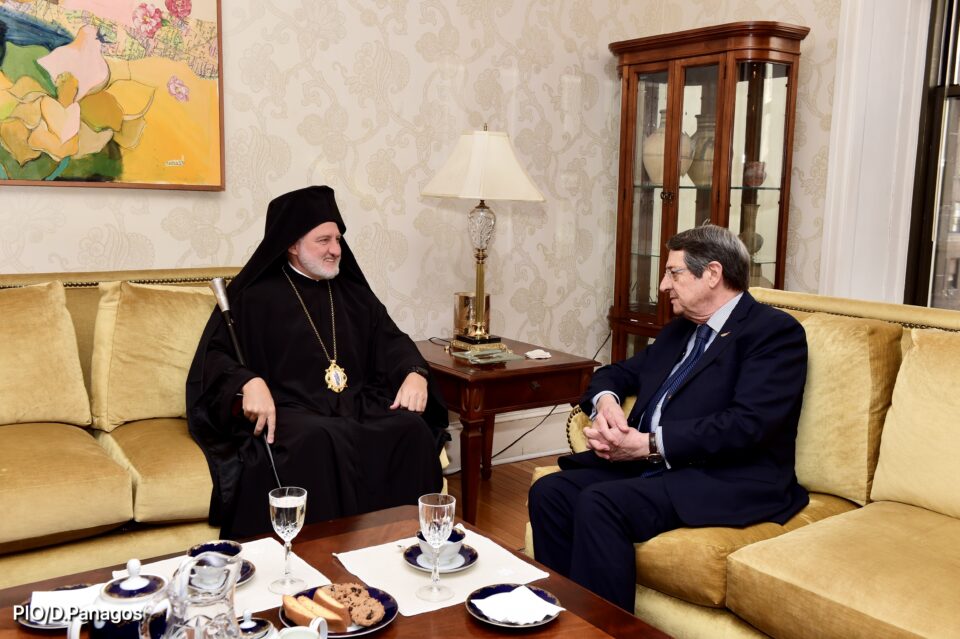 The matter of Archbishop of America Elpidoforos’ participation in an event in New York where Turkish Cypriot leader Ersin Tatar was presented as ‘president of the TRNC’ is considered closed, President Nicos Anastasiades said on Saturday.

“What is important is the unity of Hellenism,” Anastasiades said after a 20-minute meeting with Elpidoforos at the residence of Cyprus’ permanent representative at the UN in New York. “Consequently, after the explanation … his Eminence’s apology, I think the matter is closed.”

Anastasiades had cancelled an earlier meeting with the archbishop earlier this week after Elpidoforos attended the opening in New York on Monday of the Turkish House by Turkish President Recep Tayyip Erdogan.

Elpidoforos and Tatar are seen in a photo among those cutting a ribbon for the opening of the building that will house the Turkish permanent mission to the UN, the Turkish Consulate and offices to be used by the Turkish Cypriot side. UN Secretary-General Antonio Guterres was also among them.

The move angered Greeks and Greek Cypriots, prompting the archbishop to issue a public statement saying his presence did not in any way constitute recognition of the breakaway Turkish Cypriot state or the 1974 Turkish invasion.

In a thread on Twitter, Elpidoforos said that as an Istanbul Greek he and his family have experienced the dreadful consequences of being uprooted from their ancestral land as did many of their compatriots, but also people from the Imvros and Tenedos islands, “due to another escalation of the Cyprus issue in the 1970s.”

“I grew up with this pain, which is why I understand the pain of our Cypriot brothers, as well as their feelings and reactions,” he added. “I consider them expressions of pain of people who lost everything: property, homelands, dreams, family, relatives.”

His presence at Monday’s event could never be a recognition of a calamity, or of an occupation but has always had the same constant orientation: honest and courageous dialogue, for a future with peace and protection of religious freedom, he said.