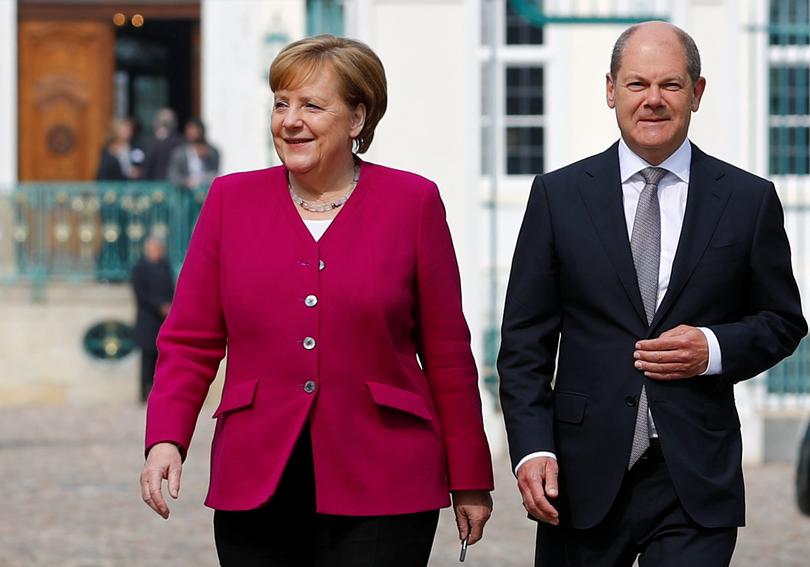 Last January Angela Merkel’s Christian Democrats (CDU) were ahead in the German opinion polls by fifteen points. She was stepping down after sixteen years as chancellor (prime minister), but she was still by far the most trusted politician in Germany. Indeed, she is universally known as ‘Mutti’ (‘Mummy’).

Yet by June the Greens had overtaken the CDU and were leading in the polls for the first time ever. Green Party leader Annalena Baerbock looked stunned by the turn of events, but it didn’t last long. Allegations of plagiarism in her new book quickly punctured her balloon.

By this month, with national elections due on Sunday, it’s the Social Democrats (SPD) who are well ahead of the pack, and party leader Olaf Scholz looks like a shoo-in as the next chancellor (prime minister). How to explain the high-speed churn? “You may as well cite chaos theory,” said an SDP staffer.

But it’s not really that mysterious. The election campaign has really been a search to identify which candidate can best fill the role of ‘Mutti’.

The CDU’s own candidate, Armen Laschet, proved too gaffe-prone for the job. (He was caught on camera laughing at some private joke while the president delivered a eulogy for the flood victims in a devastated Rhineland town.) So when the Green leader also flamed out, the mantle of front-runner draped itself around the shoulders of a quite surprised Olaf Scholz.

Olaf Scholz used to be known as ‘Scholzomat’ for his robotic delivery when speaking in public, or even the ‘grinning Smurf’ for his blue eyes and fixed smile. Then he had an “ideological detox” (his own words) that moved him well to the right in the Socialist Party.

That made him eligible for senior cabinet positions when the SPD went into coalition with the CDU in 2013, and for the last four years he has been Germany’s finance minister. He got the new nickname of ‘Bazooka Man’ when he described his pandemic bail-out plan as “the big bazooka we need to get the job done,” but he still wasn’t seen as a likely candidate for chancellor.

Thanks mostly to the under-performance of his opponents, he has emerged over the past four months as the odds-on favourite for the chancellorship. Now his aides call him ‘Lazarus’, and one of his own campaign ads says bluntly “er kann Kanzlerin”. That means “he can do the Chancellor’s job” – but ‘Kanzlerin’ is the feminine form of the word.

He may never fill Mutti’s sensible shoes, but he will probably be the leader of the second-biggest Western democracy for the next four years, so what he does in office will have an impact on many things beyond Germany.

German governments are almost always coalitions, so the first question is: who does Scholz form a coalition with? The probable answer is the ‘traffic light coalition’, so called because the traditional colours of the three parties involved – the SPD, the Free Democrats and the Greens – are red, yellow and green.

Such a government would be centre-left, but not very far to the left because the pro-business Free Democrats would be a brake on that. Scholz intends to raise the minimum wage to €12 an hour ($14), but promises no major redistribution of wealth.

The traffic-light coalition would be committed to fighting climate change, but its internal dynamics would prevent it from doing anything drastic like shutting down coal-fired power stations or imposing speed limits on motorways. The Merkel status quo would largely survive the transfer of power.

And if the electoral arithmetic turns out to work in the other direction and the CDU emerges as the biggest single party, nothing much changes either. The most plausible deal then would be the ‘Jamaica coalition’, after the colours of the Jamaican flag, but it just substitutes the CDU’s black for the SDP’s red. The other two parties would remain the same.

In other words, much commotion but not much change – which is, in fact, what almost everybody who isn’t German would prefer. Germany has been a rock of stability in a world where many previously predictable countries have been breaking loose from their moorings: Modi in India, Brexit in Britain, Bolsonaro in Brazil, Xi in China, Trump in the United States.

Maybe Joe Biden can restore the United States to its traditional role as the guarantor of the status quo, but that remains to be seen – nor does everybody even want the status quo back. The tectonic plates will continue to shift, and nobody knows where we will all end up.

But it is reassuring that Europe, the principal source of wars for the past four centuries, remains a stable and relatively contented island of peace and prosperity. It owes that, in large measure, to the sane and undramatic politics of Germany.