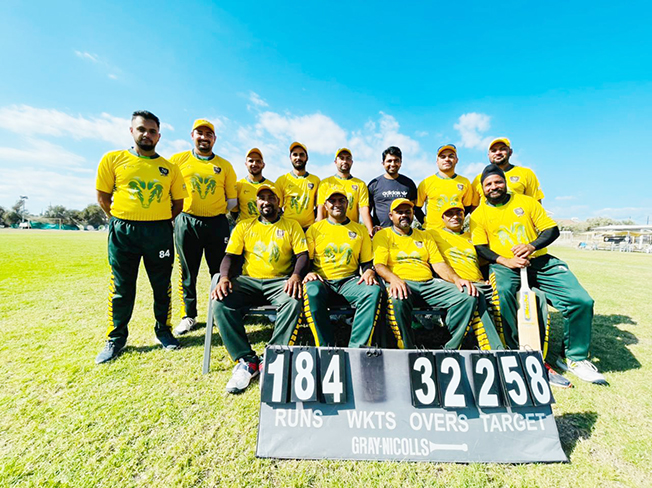 Moufflons had gone 34 years without winning a trophy

By Richard Boxall
Moufflons finally ended their 34-year wait for their first trophy by beating Sri Lankans in the final of the 2021 #BAOFINANCIAL 40-Over Cup presented by Abbeygate Insurance at Ypsonas.

Moufflons were indebted to two players called M Khan for their impressive total of 257 for 9. Mehran made 53 and Minhas 58, and after slipping to 118 for 5, Moufflons will have been happy with their final score.

Chamal Sadun was the pick of the Sri Lankan bowlers with 3 for 29, and he also top-scored with the bat. After the loss of four early wickets, Sadun (66) combined with Denuwan Prartana (46) in a century partnership for the fifth wicket that threatened to take the game away from Moufflons.

But once the stand was ended, the tail was quickly removed by Gurdeep Sharma’s 5 for 29, and the innings subsided to 184 all out, leaving Moufflons winners by 73 runs and champions for the first time in their history.

On Sunday three matches were played in the 2021 #BAOFINANCIAL T20 Cup, all of which had some bearing on the line-up for the semi-finals.

In the eastern group, leaders Riyaan suffered a 65-run defeat at the hands of Punjab Lions, whose 243 for 8 in 20 overs proved to be too much to chase down.

As a result, both teams were tied at the top of the table with Black Caps, so that the final positions had to be decided on net run rate, and it is Punjab Lions and Black Caps who will advance to the semi-final stage.

Amdocs could join them if they win their remaining two matches. Sri Lanka Lions are in pole position as they are currently second with the best net run rate, but could fall back if they lose their last game heavily. Meanwhile Limassol Qalandars, having finished their games, are watching on and hoping for others to fail.

Attention will now switch to the international T20 matches between Cyprus, Estonia and Isle of Man which will take place at Happy Valley next week.

In the meantime the European Cricket Network series of floodlit 10-over matches continues on a daily basis at Ypsonas ground.